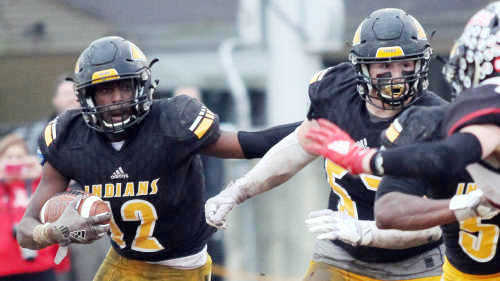 Photo by Dustin Ward, staff
Kennett's No. 12 Marsayv'aun Harrell runs to the right of No. 57 Jake Brooks Saturday in a Class 3 football state semifinal against Odessa at Metz Chery Stadium in Kennett.
Order this photo

KENNETT, Mo. - The most successful postseason run in school history ended a victory shy of a trip to the Class 3 state championship for the Kennett Indians football program Saturday.

The undefeated Odessa Bulldogs jumped out to a 24-0 lead by the 9:39 mark of the third quarter and withstood the rally that followed as it outlasted Kennett 31-14 in a Class 3 state semifinal at Metz Cherry Stadium in Kennett.

Kennett made noise late when it scored touchdowns on its first two drives of the second half to cut Odessa's lead to 24-14 with 11 minutes left in regulation.

But Odessa (14-0) withstood the Indiansĺ surge and responded a 63-yard touchdown drive on its next offensive possession to pad its lead to the final score with 9:39 left.

Kennett pushed the ball to the Odessa 27 on its next offensive drive before turning the ball over on downs with 6:46 remaining. The Bulldogs followed with a 10-play drive that ended at the Kennett two-yard-line when time expired.

ôWe thought we had them on the ropes when we got it to 24-14,ö Kennett coach Joel Wyatt said. ôBut credit Odessa because they answered with a three-play touchdown drive shortly after we cut it to 10. But Iĺm proud of the kids for battling and finding a way to get it to 10. We felt if we could have got one more defensive stop early in the fourth quarter it would have came down to the wire.ö

Odessa got the ball first in the second half and took its largest lead of the game at 24-0 with 9:39 left in the third quarter when Ethan Urlaub ran three yards for his 19th rushing touchdown of the season.

ôWe knew we had to put up some points to get some momentum and we did,ö Kennett senior Carter Maddox said.

The Indians got the ball back quickly after Harrellĺs first score when it recovered an onside kick.

ôWe stuck together when things got tough,ö Kennett senior Jake Brooks said of the recovery. "We got behind early but we never stopped fighting."

Kennett moved the ball into Odessa territory a couple of times in the first half but never found the end zone.

The Indians pushed the ball to the Odessa 29 on the opening drive of the game before fumbling it away. Odessa turned the turnover into points with a three-play touchdown drive highlighted by a 46-yard touchdown run by Luke Malizzi. The successful point-after-attempt by Wade Johnson gave Odessa a 7-0 lead with 10:45 left in the first quarter.

Both two teams failed to score on their next two offensive possessions.

Kennett got the ball for a fourth time at its own one-yard-line with 7:24 left in the first half after Odessa turned the ball over on downs. Odessa padded its lead to 9-0 one play later when it tackled Kennett in its own end zone for a safety.

After the safety, Odessa returned a kickoff to Kennettĺs own 40. Quarterback Josey Merierarend threw a 40-yard touchdown pass to Kade Kehl on the next play as Odessa increased its lead to 17-0 with 7:03 left in the first half.

Kennett followed with a 15-play drive on its final offensive possession of the first half but came up a yard shy of a score. The drive was halted when the Indians failed to convert on fourth-and-one from the Odessa one-yard-line with 30 seconds left in the second quarter.

ôWe try to preach to the kids when you get this far itĺs probably going to come down to three or four plays and you just donĺt know which three or four players will decide it,ö Wyatt said. ôWe needed to shove the ball in and make it a 17-7 game late in the second quarter. Not scoring there was probably the biggest play of the game.ö

Stopping the run proved to be the biggest challenge for the Kennett defense.

Odessa, which scored a season-low 31 points against Kennett, rushed the ball 40 times for 285 yards while completing just six of eight passes for 96 yards.

Malizzi led the way for the Bulldogs with 25 carries for 231 yards.

ôMalizzi got loose on us on the ground and ran for big yardage a few times,ö Wyatt said. ôThey pretty much kept it on the ground today. When they did throw it, for the most part, our coverage was good except for the one big touchdown pass when we were playing man. But they are more than capable of passing it if they have to moving forward.ö

Kennett also moved the ball more frequently on the ground than in the air. The Indians finished with 42 carries for 196 yards and completed 4 of 10 passes for 55 yards.

ôOdessa's defense is good and they are well-coached,ö Wyatt said. ôWe had to do some things to try to get the ball on the perimeter. Even when you do that they have two quick safeties. Their offense gets a lot of credit for scoring so many points but they also do things well defensively.ö

Harrell, who entered the contest with 180 carries for 1,974 yards this season, surpassed the 2,000-yard rushing milestone in his final high school game.

ôAnytime you do that itĺs a testament to not only the running back but the offensive line and receivers on the edge that turn those short runs into long ones,ö Wyatt said. ôWhen Marsayvĺaun gets the ball in space he can make you miss. Heĺs also got great vision and balance. Today, he also exhibited some toughness because he took some shots and kept going against a physical Odessa team.ö

Kennett finishes its season with a record of 13-1.

ôIt has been a really special year,ö Wyatt said. ôObviously, if you are not the last one standing itĺs a little bit bittersweet. Todayĺs loss will hurt for a while as it should but Iĺm sure as the weeks go by these kids will look back on this season with a lot of smiles and a lot of pride.ö

ôItĺs was great,ö Maddox said. ôWe broke some records. We really bonded throughout the summer. We were with each other more than we were with our families. Our success all started in the weight room. Itĺs was tough work but the whole team loved it.ö

ôWhen I got here they were sophomores,ö Wyatt said. ôI got to coach them for three years and they went 31-7 in those three years at the varsity level. Weĺve built some very strong relationships with those kids, which is what it is really all about in the grand scheme of things. We will miss them all. It has been a joy to watch them grow, develop, and mature.ö

Wyatt hopes upcoming talent in younger grades remains dedicated to football like the nine members of the 2019 senior class.

Kennett enjoyed success across the board in its football program in 2019 with its seventh grade team finishing 6-0, its eighth grade squad going 4-2, and its junior varsity going 8-1.

ôItĺs exciting,ö Wyatt said of the success in the younger grades. ôThe question mark has always been can you get these junior high kids to continue to come out for football in high school. Itĺs kind of been a trend here that they dominate in junior high and then maybe high school football is not for them. Maybe itĺs too much work or Iĺm too demanding.