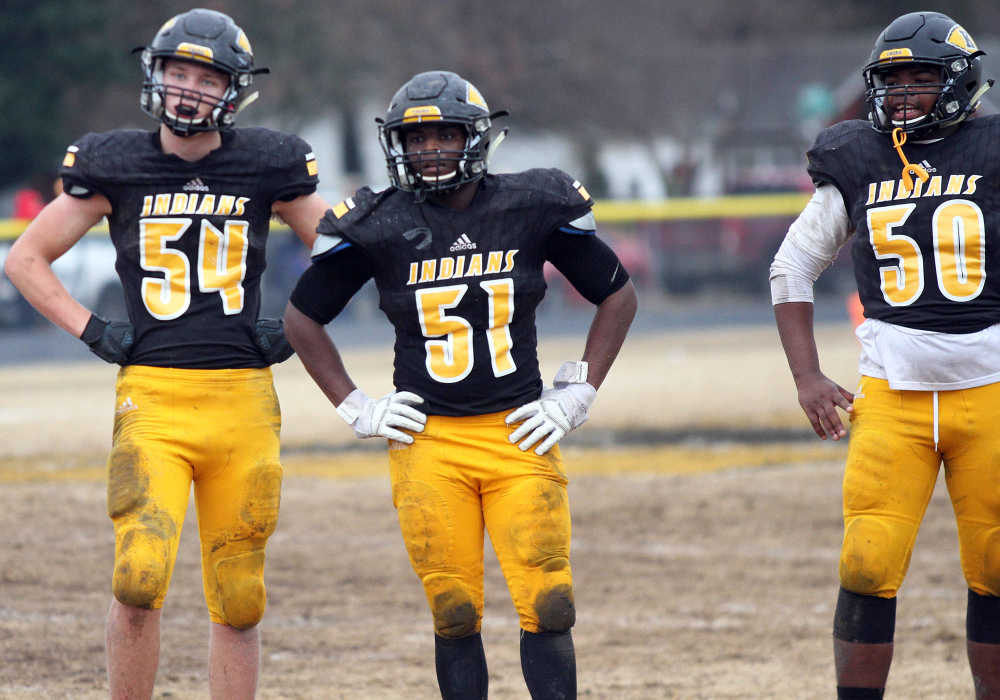 Photo by Dustin Ward, staff
Kennett offensive linemen No. 54 Ayden Tidd, No. 51 Lorenzo Thomas, and No. 50 Kewon Hopkins eye the sideline during a Class 3 state semifinal contest against Odessa Saturday at Metz Cherry Stadium in Kennett.
Order this photo

Kennett graduated three all-conference offensive linemen - Trevon Lemons, Zach Lewis, and Mark Wagster - off of a 2018 squad that advanced the state quarterfinals for the first time in more than three decades.

“We lost several key contributors last season,” Kennett senior lineman Jake Brooks said. “We knew we had to come out here and work hard to fill that void. We started working hard in July and never stopped."

Before the season got underway Kennett head coach Joel Wyatt acknowledged himself filling the void upfront was going to be one of the biggest challenges for the 2019 squad.

“We are deeper in the skill positions but very thin upfront,” Wyatt said in August. “We lost three linemen off the 2018 team that were great kids and great workers. We’ve still got some question marks regarding who will step into their shoes and fill their positions.”

“That's a unit I’m so proud of,” Wyatt said after Saturday's season finale against Odessa. “We had a lot of question marks on the right side and at center. I’m so proud of those guys and the way they stepped up. They got better and better and that’s just a testament to their work ethic.”

Brooks, who was one of two returners on the line along with Hounihan, transitioned to a new position even as a returner.

“They moved me over from center to left guard and Kewon stepped up big time at center as a sophomore,” Brooks said. “We had a lot of young guys step up on this team and the experience they got on the line should help them out big time next year."

Kennett’s offense enjoyed its fair of success moving the ball on the ground behind its offensive line. The Indians, which averaged 42 points per game, moved the 464 times for 4,059 yards on the ground in 2019.

“All of our success came down to hard work,” Brooks said. “We stuck together all season and worked hard."