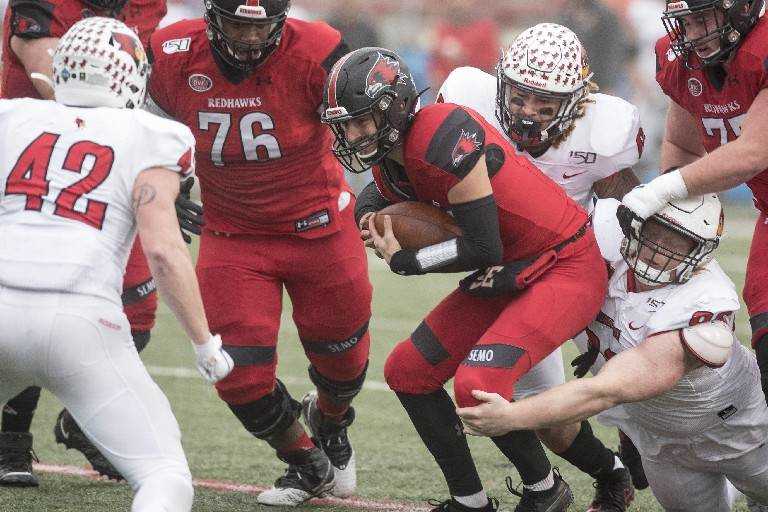 Southeast Missouri State quarterback Daniel Santacaterina tries to avoid pressure from the Illinois State defense Saturday at Houck Stadium in the opening round of the 2019 FCS Playoffs.
Tyler Graef ~ Tgraef@semissourian.com

There was no secret as to what Illinois State wanted to do in its FCS Playoff game Saturday at Southeast Missouri State.

The No. 13-ranked Redbirds offensive attack centers around running the ball and that is precisely what they did from the outset until the final gun, as they beat the No. 12-ranked Redhawks soundly 24-6 at Houck Stadium.

Illinois State opened the game by handing the ball to senior runner James Robinson on six consecutive plays and he showed why.

Robinson gained 78 yards on that opening drive, which was capped by 11-yard score, which gave the visitors all the offense they would need.

The Redhawks played the opening half without the services of starting quarterback Daniel Santacaterina, who had issues with his foot and shoulder.

“(Santacaterina) was injured and wasn’t able to run at practice,” Matukewicz said. “He was released (to play) and wanted to play. He’s a competitor and I had to make that call.

“I made the call based on the guy (back-up Joe Pyle) that was healthy.”

As it turned out, the struggling Southeast offense was a secondary issue, as compared to Robinson.

Robinson finished the game with 297 yards rushing, as Illinois State (9-4) built a 21-3 halftime lead and was never seriously threatened.

Santacaterina entered the game in the second half and finished by completing 8 of 13 passes for 81 yards and a pair of interceptions.

The Redhawk run game was as weak as Illinois State’s was strong.

Southeast totaled 109 yards on the ground, 34 of which came on a fake punt run by linebacker Devin Alexander.

“As you grow and are building,” Matukewicz said, “all of this is feedback. It’s feedback for me, where we need to go recruiting and how we need to win in the playoffs.”

The Redhawks finished the year with a 9-4 mark. It was the second straight season the program has won nine games and advanced to the playoffs.