OFF AND RUNNING: Area teams kick-off their respective seasons Friday in the first day of the Riverbend Shootout 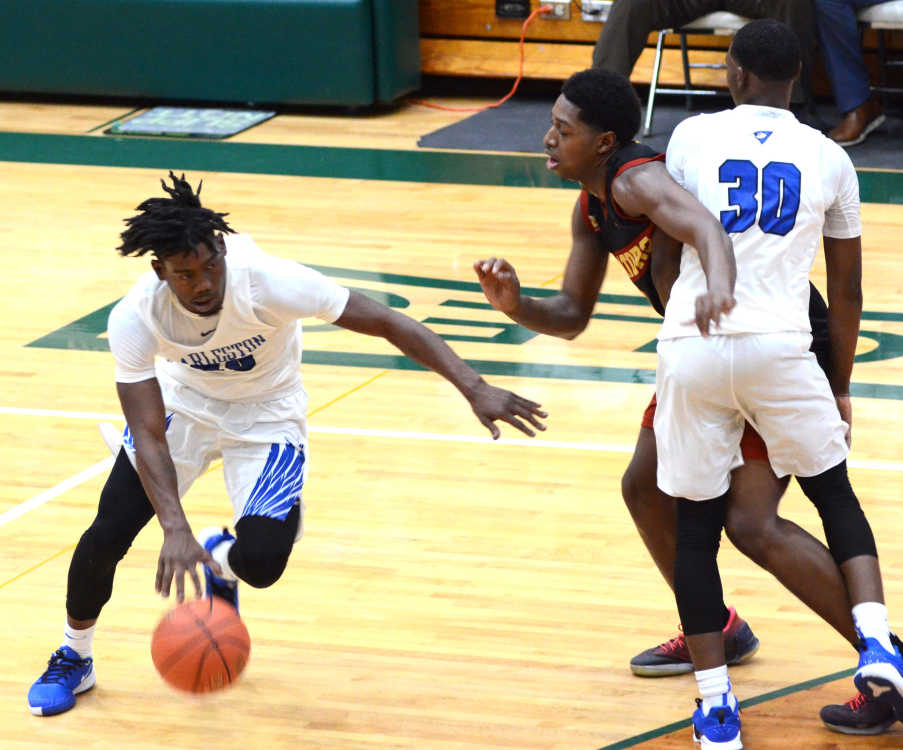 NEW MADRID, Mo – It didn’t take long for Charleston to get its first gut-check of the year.

In their season-opener against Memphis Day Academy, the Bluejays surrendered a double-digit second-half lead before a late stand helped Charleston emerge victors 76-71 Friday at the Riverbend Shootout.

“We played a great team,” Bluejays’ head coach Danny Farmer said. “I was so excited that we played so well the first half and then ended the game the way we did. We played close tough at the end. That builds character. It’s a great win for us.”

Memphis tied things up with a Denver Jones basket with 1:18 to play, 71-71, and back-to-back missed shots by Charleston on the other end led to a Gladiator rebound.

With under a minute to play, Memphis was running down the clock to set up the last shot only to see Isaiah Gillespie deflect a pass for Charleston before hauling the ball in for a steal.

Back on the offensive end, the Bluejays saw Blessin Kimble got fouled before hitting half of a pair of free throws to put his team up 72-71 with 18 seconds remaining.

A timeout by Charleston after the made free throw allowed Farmer to direct his team on what he saw as the Gladiators likely game plan on their next drive.

That timeout proved crucial as Memphis’ DeCoreio Smith drove the lane for the potential game-winning basket only to get called for a charge as Kimble set up in his path near the basket.

The charge fouled Smith out at 24 points, and the Bluejays hit on four of their final six free throws to hold on for the win.

“The thing about it is we called a timeout and told Kimble to slide over,” Farmer said of the key foul. “(We thought) Smith would drive to the bucket. We didn’t want him to beat us, so I told him to slide over and take the charge. I was excited over that.”

“Offensively, we played great,” Farmer said. “I didn’t expect this, to be honest with you, to play as well as we did. But I’m excited we did. Memphis is a good team. They have Division 1 (quality) players. We knew that going into the game.”

The Chargers led 23-14 after the first quarter and extended their lead to 12-points entering halftime.

Covington outscored NMCC in each of the final two quarters to hold on to their double-digit leads and pick up the win.

Travontae Powell led the Chargers with a game-high 28 points. Tyjuan Smith and Brandon Alston added 18 and 12 points to their team’s cause, respectively.

For the Eagles, Ke’von Williams scored 21 points with Ansel Underwood pitching in 16 points.

Roosevelt outscored the Hawks by four points in the third quarter to cut an eight-point halftime deficit in half going into the fourth quarter.

Kelly out-paced the Roughriders 25-14 in the final frame, however, to prevent a comeback and open their season with a win.

Devin Heuring and Bryce Morgan scored 15 points each to lead the Hawks, and Gavin Jansen was close behind with 14 points.

Cairo jumped out of the gate to a 23-8 lead after the first quarter and extended their lead to 21-points, 41-20 entering halftime.

Daurice Morse led the Pilots with 18 points, and Andrew Rodgers paced the Tigers with 17 points.