Column: SEMO football coach isn't the only blessed 'Tom' in this town 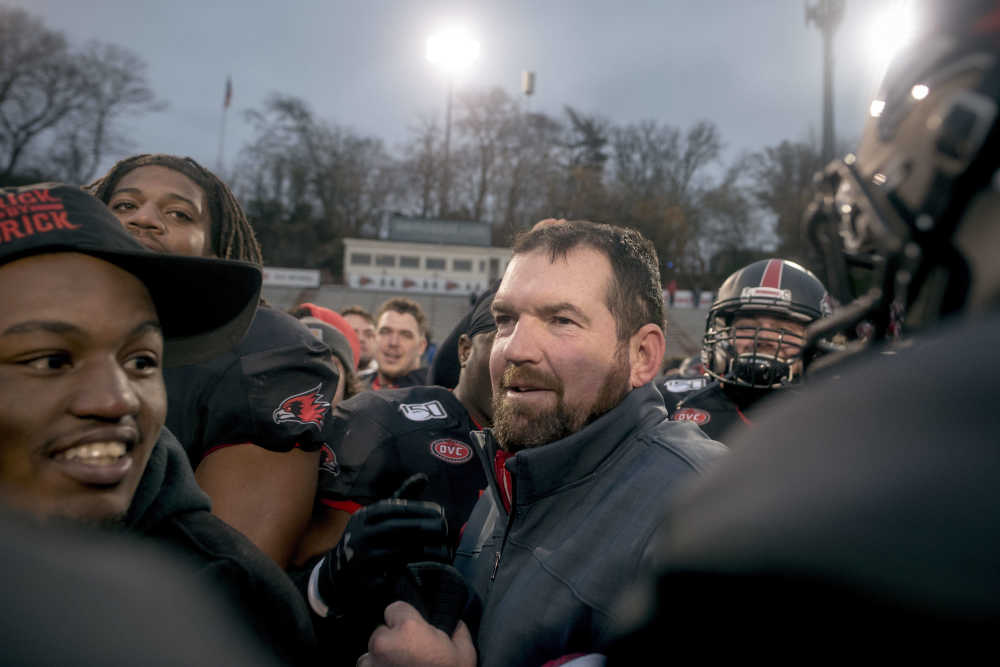 Southeast Missouri State football coach Tom Matukewicz squeezes between players to hoist the OVC championship plaque after his Redhawks clinched a share of the title with a win against Murray State Saturday at Houck Stadium.
Tyler Graef ~ Southeast Missourian
Order this photo

The above statement could not be more accurate, and it was made by a guy who openly admits to having been a mediocre student to the point that he “hated school.” But sixth-year Southeast Missouri State football coach Tom Matukewicz was correct in his assessment of what has allowed the Redhawks to achieve unprecedented success.

There are a lot of people affiliated with the Southeast football program that are thankful on this fitting day, but none more so than Matukewicz. Truth be told, he can’t believe how blessed he is to be here personally or professionally and he’s not the only Tom in Cape Girardeau that feels that way.

Matukewicz is part of an organization in which “everyone is pulling in the same direction for a common goal” and so am I.

Matukewicz knows deep down inside that sure, he has worked hard to put himself in this fortuitous position, but, without divine intervention, there is no way in Hell he could have reached this point on his own.

A year ago today, I was unemployed and at my age, in this industry, that is a bad place to be.

The fact that I am married to a special education teacher is doubling-down on our career luck. However, much like fate surrounding Matukewicz with like-minded, driven people, the same could be said for me.

It takes someone like Rust Communications co-president Jon Rust to grasp the value in bringing in a 52-year-old to oversee his sports web site.

By nature, I am a contrarian to an extreme degree and that certainly applies to my journalistic philosophy. I just spent a decade working for a Pulitzer Prize-winning newspaper (The News-Sentinel in Fort Wayne, Ind., God rest its soul) and in the end that did us nary an ounce of good.

We all got two weeks’ severance when it shut down, a couple of cardboard boxes to clean out our desks, and 15 minutes to do so. You’ll have to forgive me if I don’t buy into the so-called “rules” of journalism and why they are so critical.

Staying in business is critical. Making sure a photo doesn’t “look off the page” really, in the big picture, isn’t.

My personality, as it applies personally or professionally, isn’t for everyone, but it fits with Jon.

Jon spent years working in Russia when who knows whether it was safe/smart to do so? The guy was tailed by the KGB for Christ’s sake.

“There have been times in my life when I have done some things that weren’t very smart,” Jon once told me.

He invested heavily in making our headquarters a beautiful place to spend more than 40 hours each week, in an industry where infrastructure spending is only done in a “must-do” manner, and even then, it depends on to what degree the “must-do” really is.

The last newsroom I worked in was so decrepit the photographer had to place plastic over his desk each time it would rain because the roof leaked so badly.

That would happen once at the Southeast Missourian before it was addressed. Because I was in Florida at the time, it happened once a day.

If the building isn’t a clear enough indication that the people at Rust Communications and Rust Media are unique, all you have to do is attend either the Shipyard Festival in September or the Semoball Awards in July to know this place is bizarre – but in a good way.

And Jon sets a tone of creativity and innovation, but also excellence, for everyone else.

Assistant publisher Lucas Presson is a devout Christian, who is being tested by the Good Lord by having to supervise me. He hasn’t failed. Yet.

New Southeast Missourian editor Rick Fahr and I share a love of horrible football teams (Arkansas for him and the Tampa Bay Buccaneers for me), as well as an adoration of canines (they are simply better than people). For whatever reason, we just “click” personally and professionally.

And my sports staff, Jeff Long and Jeff Breer, along with me, are the journalistic version of the “Space Cowboys” (Google the movie), which is different, but we each have our strengths and based on our ever-growing numbers, it’s working.

I am so blessed to have landed here, not just for the people INSIDE the company, but OUTSIDE of it, as well.

To say that I have experience in intercollegiate athletics is an Everest-like understatement.

I was a swimmer at Butler University, I spent six years coaching NCAA Division III and Division II basketball (yes, it’s an odd combination of sports, but I’m an odd dude), I spent time working within the athletic administration for Notre Dame (the Fighting Irish, not the Bulldogs), and I’ve spent decades as a journalist covering every level of athletics from junior college to the pinnacle of Division I.

What that experience allows me to say unequivocally is Cape Girardeau is damn lucky to have the people it has at Southeast Missouri State. You’ll have to trust me that the level of character exhibited by the Redhawk coaches, administrators, and athletes isn’t rare, but it definitely isn’t found everywhere.

Almost all of the people I have encountered throughout my six months in town are very similar in that regard.

From the owners to the interns and everyone in between, the Cape Catfish organization could not be better to deal with.

The high school administrators, coaches, and athletes have been just as tremendous.

How great is it that I get to pick the brains of area coaches like Matukewicz, Mark Hogan, Brent Eckley, Kent Gibbs, or Dayna Powell?

How cool is it that I get to shoot the … “stuff” with phenomenal athletes like Zach Hall, Kristian Wilkerson, Cael Welker, Daniel Seabaugh, Jacob Bening, Riley Burger, and I could go on and on?

Matukewicz is going to sit down with his family and football team today and count his blessings for where life has brought him, and with good reason. But I have news for you, he better count pretty freaking high if he is going to top me because I am as lucky as anyone around.

Happy Thanksgiving and all my best to the people of Southeast Missouri!

Tom Davis is the regional sports editor for Rust Communications. He oversees the daily content for Semoball.com and the Southeast Missourian.