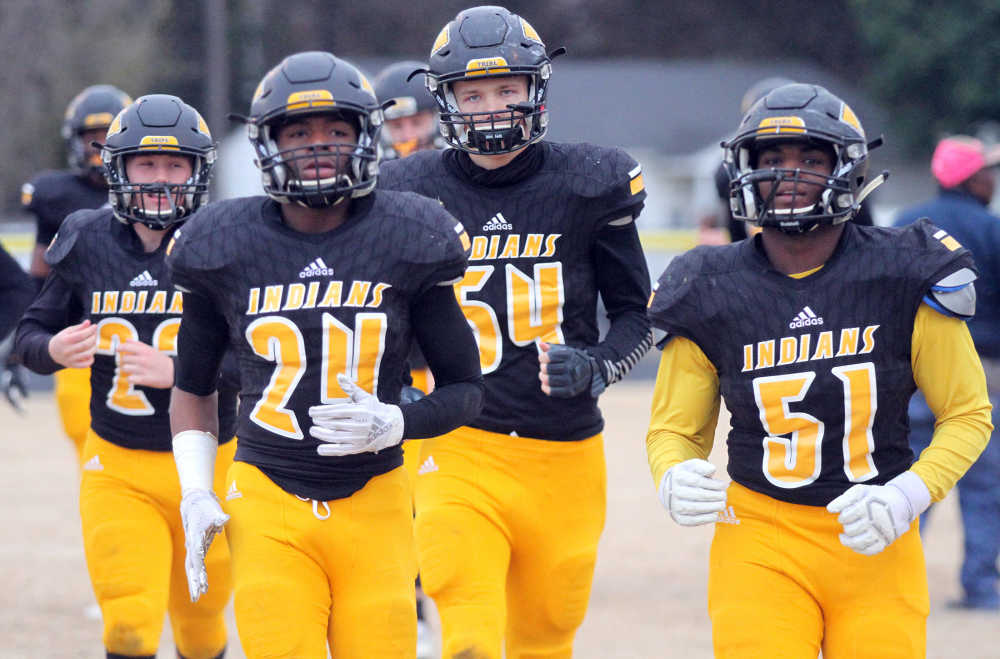 The undefeated Kennett Indians and Odessa Bulldogs enter Saturday’s Class 3 football state semifinal with the commonality of dominating most of their opponents in 2019.

Both squads have won all of their games by double digits. Kennett’s closest affair came in Week 11 when it beat Potosi 30-12. Odessa’s toughest test was its most recent playoff game it won against No. 8 ranked Savannah 53-31.

“They really haven’t been in a close contest,” Kennett football coach Joel Wyatt said of Odessa, which has outscored its opponents 740-130 this season. “Savannah did hang with them the first half Saturday. I just watched that game on film and Savannah has a great football team, also. They were only down 21-19 at halftime before Odessa outscored them 18-0 in the third quarter.”

Odessa, which averages 57 points a game, has put up more than 40 points in all 13 of its games this season.

Its lowest offensive output of the season came in Week 5 when it beat Oak Grove 42-10.

“They are a very well-coached, disciplined football team,” Wyatt said. “They always line up right and play fundamentally-sound football. Their quarterback is easily the best quarterback we’ve faced this season. They have a bunch of first-team, all-conference selections, including three offensive linemen in the Missouri River Valley Conference, which is a great conference. They are just loaded up on offense and defense. It’s hard to find a weakness with their team from watching them on film.”

Odessa, which is ranked No. 2 in the latest Class 3 state poll, has displayed the ability to move the ball on the ground and air it out against its opponents. Odessa has passed the ball for 2,254 yards and moved the ball 488 times for 3,678 yards on the ground.

“He is a player,” Wyatt said. “The ball comes out of his hand right on time. You can tell him and his receivers have good chemistry. He’s going to be a handful to contain.”

Meierarand’s favorite targets are senior tight end Kade Kehl and junior receiver Saylor D’Obron. Kehl, which is listed at six-foot-four, has 33 catches for 558 yards and 10 touchdowns. D’Obron has 35 catches for 735 yards and eight touchdowns.

Senior running back Ethan Uhrlaub has also raced the ball into the end zone frequently. Uhrlaub, which has at least one rushing touchdown in every game this season, has 47 carries for 192 yards and 18 rushing touchdowns.

“They are physical,” Wyatt said. “They run it at you hard. They’ve also got some speed to go with it. But it seems like their line is where it all starts. They get good protection when they throw it and have open lanes when they put it on the ground.”

Kennett, which is ranked No. 5 in the latest state poll, has enjoyed its own success moving the ball on the ground as a run-first squad. The Indians have 422 carries for 3,863 yards.

Senior running back Marsayv’aun Harrell has paced the Indians’ rushing attack with 180 carries for 1,974 yards and 30 rushing touchdowns.

Sophomore Jordan Jarrett is also a threat to put together a big rushing performance for the Indians. Jarrett has 70 carries for 810 yards and 14 rushing touchdowns.

Despite the Indians’ success on the ground, Wyatt said his squad must be prepared to move the ball in the air more frequently against a good run defense.

“I think Odessa will be really stout against the run,” Wyatt said. “So we are probably going to have to throw the ball a little bit more than normal on Saturday.”

“They fly to the football on defense,” Wyatt said of Odessa. “They have good speed and do things right so we will have our hands full.”

“He had a little bit of a shoulder issue but I think he will be fine,” Wyatt said. “We will know more later in the week but he should be ready to go. But other than that, everyone else walked away healthy after the Roosevelt game.”

Another plus the Indians have entering the state semifinals is they can have more daytime practices since school is dismissed for Thanksgiving.

“Thanksgiving throws a curveball at our routine but Odessa is in the same boat,” Wyatt said. “We will try to keep things as normal as possible. We are not in school all week so we will be able to get out in the warmer part of the day instead of being under the lights. We will practice on Thanksgiving as well. There is just no way around it. We’ve got to prep and get ready so, hopefully, that will not become an issue.”

Kickoff is set for Saturday at 1 p.m. at Metz Cherry Stadium in Kennett. Admission gates will open Saturday at 11:30 a.m.

It is the fifth straight week the Indians have hosted a playoff game.

“It’s great to be at home again because when you get this far the road trips are really long,” Wyatt said.