Good sports: Wyky Jean is grateful for opportunity to give back after overcoming obstacles 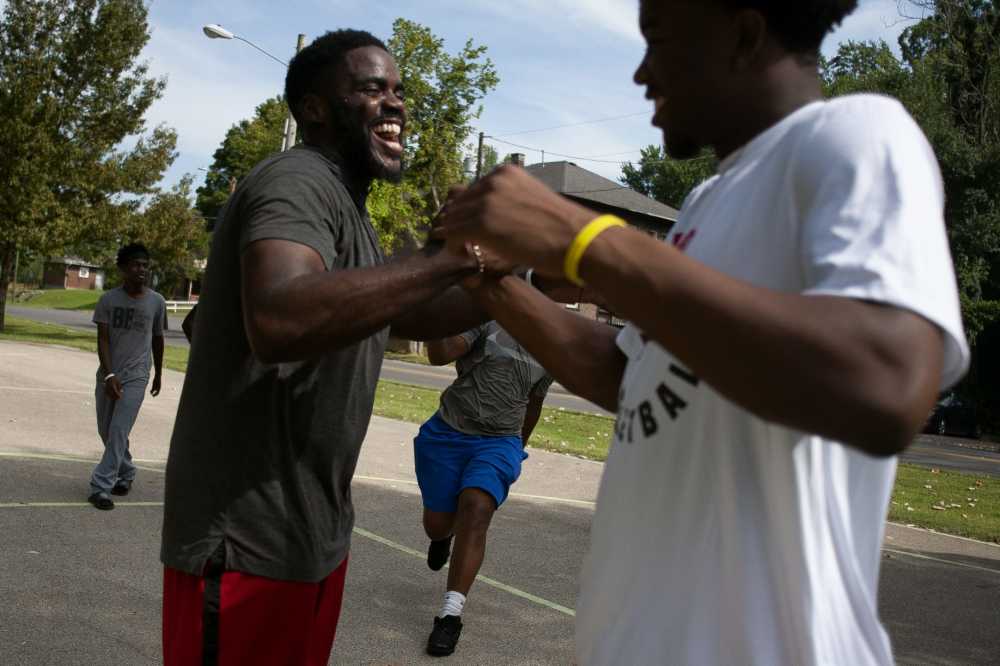 Good Sports is a weekly feature that appears in the Southeast Missourian, as well as online on Semoball.com. It profiles the life of a person connected to sports and allows our readers the opportunity to know the people who are impacting athletics throughout Southeast Missouri in a deeper way. Responses have been edited for brevity and clarity.

Today: Wyky Jean. Jean, 29, is a co-founder of Cape Girardeau's Honorable Young Men's Club (HYMC). He is a former member of the Southeast Missouri State Redhawks football team (2009-2013). His personal story of overcoming adversity, his engagement with sports and his gratitude for it all make Jean's story an appropriate one for Thanksgiving week.

We have to start with your unusual name.

There's not a lot to say, really. My family is originally from Haiti and my name, Wyky, has to do with what I call my mother's Caribbean creativity.

You were once on the Redhawks, who are now headed to a second straight postseason. You're from Florida -- how did you end up at Southeast?

I played both ways on a great high school team in Fort Lauderdale, Calvary Christian Academy. My junior year we went 10-0. In my senior year, I was a tight end and my receptions total put me among the leaders in Broward County. On defense, I was solid at stopping the run and I had an interception at defensive end. It was said that I had phenomenal hands and athleticism. I had offers and there was lots of interest in me at the next level. I really wanted to go to Arizona State.

No, ASU backed off when they learned of my scoliosis.

It did. I was working in our new house and couldn't catch my breath and that's what it was. When I was 11, I had a 12-hour surgery to correct it. Scoliosis is a curvature of the spine that most often occurs during the growth spurt just before puberty. Doctors were flown in from South Carolina and Georgia. I had to learn to walk again.

You built your body up afterward.

Yes, I hit the gym. I lifted weights. I ran. It's Florida, so we run. I loved learning but hadn't figured out yet how I learn best so I was a mediocre student in the classroom. I came to realize that football was my path to higher education. Sports would get me there.

Due to your physical condition, you started late.

That's true. I never played sports before the 10th grade. Sports, like scoliosis, changed my life.

Sports taught me camaraderie, hard work, the value of consistency and about being held accountable. Friends and coaches would unapologetically keep me accountable about everything. Being on a team taught me that it's not about what I want but whatever the team needs. On the Calvary Christian team, yes, I had receptions but did a lot of blocking too. What the team needed. We all wanted to see each other succeed, so ego was out of the question. That is where I learned the benefits of team chemistry.

Having successfully come through a major operation on your spine, how were you able to play?

I got cleared as a sophomore and I did a lot of work on myself physically and mentally to get to that point. By all logic, I shouldn't have been playing football. My mom was terrified.

How good were you?

That's for others to judge but if I hadn't had scoliosis, I think the NFL would have been in my future. In the state of Florida, football is played at a high level. As it was, I knew college was the end of it for me.

Back to the original question. Why Southeast?

Chris Norris was a Redhawks assistant whose area of responsibility was Florida under Tony Samuel, head coach at the time. Norris was the one to come to the house to recruit me. I knew my hard work had paid off. SEMO was the most persistent school. They visited me at Calvary Christian too. This is a big reason I came to Cape.

I came to Cape in the fall of 2009, as one of 33 redshirt freshmen. That first year, I put on weight and became stronger. I started off at defensive end to leverage my speed off the edge. The following year I was asked if I preferred offense, which I always did. During down time, I would run routes and catch the ball in practice even although I was on the defensive depth chart. I would do whatever was asked of me. After that year, there was some coaching changes. I would go on to rupture three ligaments in my right knee. I rehabbed and stayed consistent. Never gave up although that was a turning point in my career. I always tried to remember that the degree was the goal. I had big things to accomplish after football.

Where did they use you?

Special teams, defensive end for one year, and at tight end to finish out. I battled injuries throughout. My back wasn't able to do what my mind wanted. Hips and knees were compromised. I was a reserve player my whole time with SEMO. I remember when my some of my teammates finally saw my large scar -- it covers my back -- and the remark was made, "How are you out here?"

You graduated SEMO in 2014. You stayed in Cape.

Yes, my family lost our home to foreclosure. If I'd moved back, I'd be a burden. By the way, I have three siblings -- there's an older brother, another brother and sister who are twins, then me. As a young man I aspired to get a degree and make money and thought there was an opportunity in Cape that lined up with my vision. I believe in the power of solid relationships. At one of the lowest periods of my life I also realized that I had a strong support system in Cape.

You co-founded the Honorable Young Men Club (HYMC) in 2016. What were the steps between SEMO graduation and HYMC?

I was an administrative assistant at the Show Me Center for awhile. I worked part time at the juvenile center in Cape as a first responder. I started working with underprivileged and at-risk kids. In 2015 and 2016, my friends and I got involved every Tuesday at the Christian Boxing Academy with mentoring. I believe in community outreach. In 2016, we started visiting boys at Central Middle School on Tuesdays. Volunteered there for seven months. The Cape Public Schools hired us after our work with about 39 students -- as demonstrated in the data -- showed they had made progress.

How was the progress measured?

We went in there for those seven months, two hours every Tuesday, and the district told us in-school suspensions (ISS) and out of-school suspensions (OSS) went down. Attendance went up, grades rose, and the number of kids involved with us went up to 185 the following year.

There are four co-founders of HYMC.

Yes, in addition to me, Kweku Arkorful, Cantrell Andrews and Aaron Adeoye. Aaron is on leave because he signed with the Baltimore Ravens after being invited for a workout.

I don't disagree, it is most certainly on the rise. HYMC is focused on something else. The focus is life fundamentals. You'll be surprised how those fundamentals are lost these days. We work on "soft skills," being respectful, showing self-control, giving firm handshakes and making eye contact. Positive communication is key. We like to say that none of us has weaknesses, only undeveloped strengths. One-to-one relationships are the key to transformation.

I heard your philosophy at the Fields of Faith event back in October at Houck Stadium. Remind us what that is, please.

Your legacy is built on your decisions. The decisions you make today declare your direction. Your direction decides your destiny. We make millions of decisions over a lifetime.

If I heard you correctly, there is a very important decision to be made.

Yes, whether or not to accept Christ.

It is the eve of Thanksgiving. How is Wyky Jean thankful?

When I think of the little things for which I'm grateful, what I call "small wins," I'm filled with joy and there is no better feeling. You can find small wins everyday in life. One is my family, the support I continue to receive even when we're 1,100 miles apart. A second is my inner circle of friends who sharpen me each day. They push me and are a great source of positive energy. Most importantly, I thank God for preparing, providing and protecting me. I am blessed beyond measure.