As a teen, the Raiders' 7-foot-1 center slept on the streets of Lagos, Nigeria 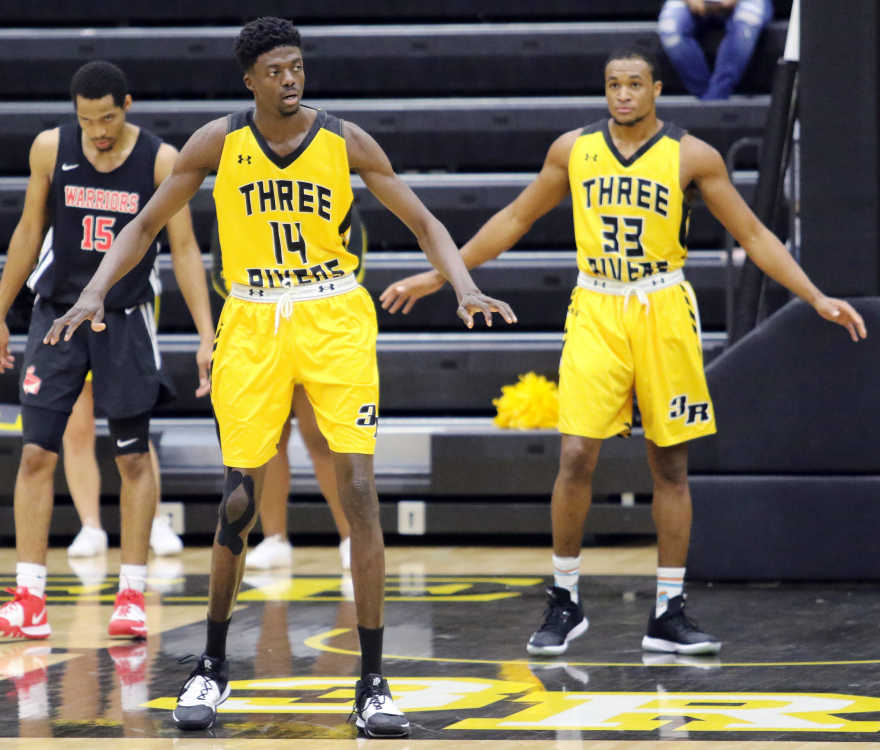 Eleven times, Mathias Ochai was offered a scholarship to play basketball in America and 11 times his student visa was rejected. He doesn’t know why. Nobody ever told him why.

The 11th rejection was to play at Three Rivers College. The consulate didn’t even let him through the gates to be interviewed for the visa. Security rejected him at the gate and refused to let him through. When Ochai asked to know why. He was told something was wrong with his application.

“At that moment, I almost give up hope,” Ochai said.

He went home and cried, then picked himself up and went to church. He prayed, started working and texted Three Rivers assistant coach Bryan Sherrer that it didn’t work out.

Sherrer offered to try one more time. So Ochai went back to the consulate and was able to get them to renew his student visa application form.

“Which is very rare. It doesn’t happen often,” Ochai said.

In the interview, he was asked one and only one question.

Now too old to play in high school, and worried he was too skinny and too unskilled to play in college, Ochai said he was going to a US university to play basketball, which he had told them many times before and always been rejected.

Maybe they thought he become an illegal immigrant. Ochai had no money, no property, no car. His family was poor. Why would he leave America?

Ochai doesn’t know why they approved his application.

“I believe it is just God. I believe God kept me back home until the perfect time,” he said.

Ochai left his home in Lagos, Nigeria, when he was 12. His dad died when he was 3 or 4, he recalls, and for years it was him, his mother and four siblings in a tiny one-room apartment in one of the worst neighborhoods in a city of 21 million people.

The now 7-foot-1 center became taller than the ceiling in the apartment.

“I used to bend all the time, my back hurts, the room is so small. The bed doesn’t fit me, the couch doesn’t fit me. It was tough for me to sleep. It was getting out of hand,” Ochai said.

He was tired of seeing his mom sad. She would cry when there was nothing to cook. He told her he wanted to leave and get out of the neighborhood, and if she doesn’t let him, he’s going to run away.

She asked and found somewhere for him to go, but Ochai didn’t wait for the arrangements to be made and left.

He looked for jobs, but there was nowhere to sleep. Now 13, he slept in an under-construction stadium for about a week. The workers asked him why he was there. They weren’t sure how old the boy was because he was tall.

Then Ochai went to stay with his father’s uncle.

“I stayed with him for 7-8 months, but throughout the whole time, he had been treating me rough. I said I had to leave his place,” said Ochai, who went back to sleeping outside.

Before he left, his uncle introduced him to volleyball. After about a year, he was told that if he played basketball he’d get a scholarship in America because he is so tall. So Ochai switched sports.

Ochai thought he was on his path to lift his family out of poverty. But the embassy denied his visa.

“When your opportunity showcases itself, you believe, ‘OK, I’m about to get out of this stress and start living a better life.’ But then it failed, so I was down. I was very down,” Ochai said.

He kept trying because the clock was ticking. He knew that once you hit a certain age, coaches in American don’t want you anymore. Ochai left to go to Abuja, the capital of Nigeria. He thought things would be better there, but they were worse.

There was a bar where he would wait until they were about to close, sneak in, sit down and try to sleep until the next morning. If security chased him out, he’d sleep on stairs outside. Eventually, he asked a security guard if he could stay with him, which he did for a few months before the guard traveled away.

When he was 16, he had four scholarship offers that year. Each of the 11 rejections brought on a deep depression. He attempted suicide once. Other times he’d lock himself in his bedroom all day and wouldn’t eat.

“I kept my faith up. I kept doing it. I would pray, go to church, I would try,” Ochai said.

A friend told him to believe in God and keep working. Others told him his height was a blessing, despite the fact that strangers mocked him for it.

Eventually, Ochai went back to practice and started training again. He was offered another two scholarships and got another two denials.

He was too old for high school basketball. Too skinny and too unskilled for college basketball. He thought about moving back home with his mom, but she had done enough for him.

Going to school in Nigeria wasn’t really an option, either.

So Ochai started looking for jobs.

A coach called and asked if he still wanted to go to America. Ochai said yes, but reminded the coach that he was 19 and couldn’t go to high school. The coach said he would talk to an NJCAA school, which is where coach Sherrer got involved.

“After a while, I didn’t hear anything from (Sherrer), and then one day he texted me and said your scholarship for me is ready,” Ochai said. “This is a miracle. Me? Go to a college in America? How?”

He kept the news to himself, though. Ochai was tired of making his mother cry after telling her his visa was denied, which it soon was for the 11th time.

After his visa was finally approved, Ochai went home after being away for seven years, but still kept the good news to himself. It was still a dream that hadn’t quite come true. He wanted to be sure first. Then his plane ticket came in the mail, he was leaving tomorrow. It was time to tell his mom.

“She wept. She was crying, she was dancing, she was rejoicing,” Ochai said. “She was all happy, very excited.”

He finally opened up about everything he had been through.”

Why didn’t he come home, she asked? They would have put money together. At least he would have had a roof.

“Where I was in Lagos, it is one of the most ghetto areas in Nigeria. It is too rough. If I stay back home and see my mother go through what she is going through, I may want to go and do something,” Ochai said. “I don’t know what I would have become. Most of my friends I grew up with, some of them are dead, some of them are criminals. I just don’t want to be part of that. So I thought it would be better to leave.”

His plane landed in Philadelphia. Ochai was wowed. This was a different world. He had a host mom in Pennsylvania and stayed with them until it was time to go to Three Rivers. It wasn’t long until he ate his first Philly cheesesteak.

For the first time in his life, he was eating three meals a day, sleeping on a good bed. Ochai was worried about leaving for Three Rivers because he didn’t know what he was going to face. He had a friend leave for American and ended up homeless. But he had to go in order to realize his dream eventually lift his family out of poverty.

Assistant coach Brian Bess picked Ochai up at the St. Louis airport and took him to his apartment at Three Rivers.

“The next day I went to take the (placement) tests. Did awful at math. But English I was OK,” Ochai said. “When I came into (the Libla Family Sports Complex), I was shocked. It was out of this world.”

He lived on campus during the summer, made friends, got ready for basketball season.

“Everybody here, they were friendly to me. Everyone wants to be my friend for some reason, I don’t know,” he said.

Ochai turned 20 in August. He loves how friendly people are, little things like WiFi, electricity, water, and other amenities he doesn’t take for granted.

“And the educational system is great because they make you understand whether you want to learn or not,” Ochai said. “You have to understand. So even if you don’t understand, you can meet with your lecturer, talk to them, they’ll try to put you through, step by step, and make you understand. Nigeria is not like that.”

“I believe God will keep her because she has been through a lot. She needs to be here to eat the fruits of her labor. I’m just praying, praying, praying about it,” he said.

When he finishes his time at Three Rivers, he is supposed to return to Nigeria in order to renew his visa for, hopefully, a four-year school.