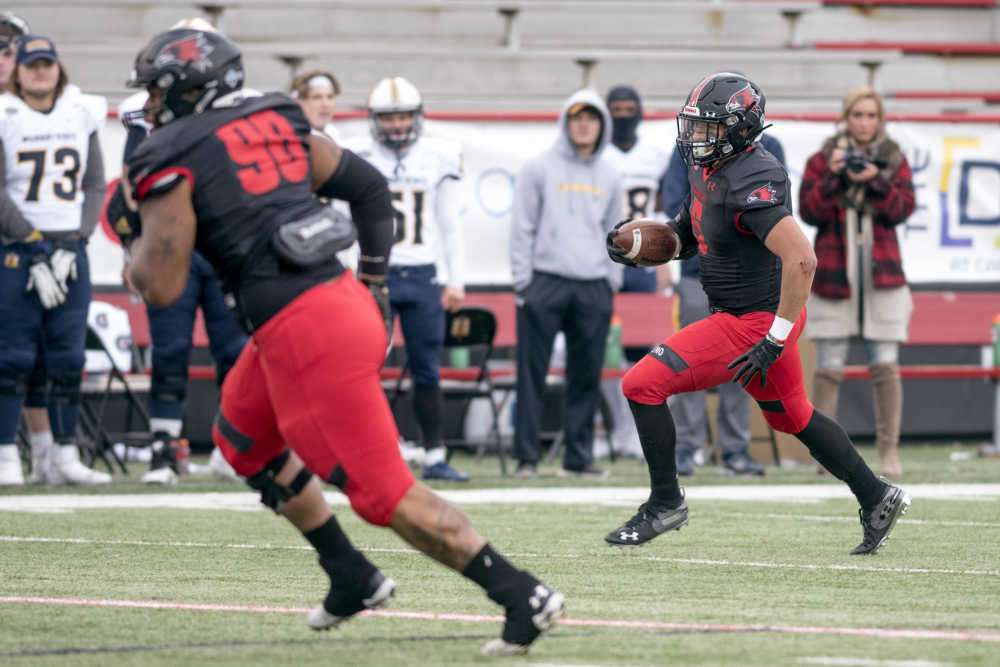 Winning a share of the Ohio Valley Conference football championship Saturday with its 31-24 win over Murray State at Houck Stadium was a first in nine years for the Southeast Missouri State program. However, winning its ninth game, as well as receiving a berth into the FCS Playoffs, isn’t new at all.

For the second straight season, the Redhawks will be hosting a postseason game.

The No. 12-ranked Redhawks (9-3) will host Missouri Valley Conference foe and 13th-ranked Illinois State (8-4) Saturday at 1 p.m. at Houck Stadium.

The Redbirds finished third in the Missouri Valley Conference with a 5-3 league record.

It’s happening for the Redhawks, which have won more games (18) in the past two seasons than any other OVC program.

The postseason berth is the third for Southeast as an NCAA Division I program.

The 24-team field will be whittled to 16 following Saturday’s games.

A Redhawk victory over the Redbirds would advance Southeast to a road game at No. 8-ranked Central Arkansas Dec. 7.

In order to host a playoff-opening game, the schools have to bid on the opportunity. The Southeast athletic department is banking on a big enough crowd to attend Saturday in order to off-set the cost of hosting the game.

The Redhawk ticket office will be open from 8 a.m. to 5 p.m. today and Tuesday, until 4 p.m. on Wednesday and from noon to 5 p.m. on Friday.

Fans can also purchase tickets on Saturday beginning at 10 a.m. at Houck Stadium.

Another game, another honor

For the second consecutive week and fifth time in his career, Redhawk senior linebacker Zach Hall was named as the Ohio Valley Conference Defensive Player of the Week.

Hall had 10 tackles against the Racers, as well as a quarterback hurry, a pass break-up, and returned an interception 61 yards for a score.

“What makes him so good is his range of skill,” Matukewicz said. “He can rush the passer. He can stop the run. He can cover (and) then pick-six.

Hall ranks third this season in the OVC with 112 total tackles, nine going for a loss, and 3 ˝ sacks.

“His skill range is crazy,” Matukewicz continued. “Most guys can only do two of those five things. That is what makes him good. Obviously he’s got a great processor and (football) instinct. But his range of skill is just awesome.”

Matukewicz had said prior to Saturday’s game that the tight end position needed to perform better than it had this season and it would be counted on against Murray State.

Both statements proved prophetic as fifth-year senior Eric Williams had a pair of great receptions in the win.

“They did a really nice job,” Matukewicz said of the position group.

Williams caught a screen pass early and was initially grabbed at the line of scrimmage. However, he used his 262 pounds and strength to break through the tackle and run for 16 more yards.

Later, he found a hole in the Murray State zone and reached high to grab a pass for a 21-yard game.

The Redhawk tight ends have battled injuries (Austin Crump and Bud Hilburn both missed considerable time this season) and have been relied upon to block more than receive to boost an inexperienced offensive line.

“Eric did a great job in the blocking, too,” Matukewicz said. “Crump is still banged up a little bit. But we need those weapons.”