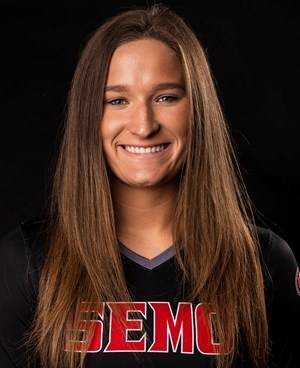 Don’t let the numbers fool you.

“Every match was definitely a battle,” veteran Redhawk coach Julie Yankus said. “That is what you expect in a conference tournament. Everyone is there with a chance to win it all because we all go in at 0-0.”

All eight teams entered the three-day event at Jacksonville State in Gadsden, Ala. unbeaten but only the Redhawks came out unscathed, as they beat the Eagles 26-24, 25-19, 28-26 to clinch the program’s first league tournament championship since 2000.

It was a smart philosophy because Southeast (23-10) didn’t have enough breathing room throughout the tournament to look ahead at any moment.

The Redhawks played 12 sets in three days and five were decided by three points or less, with four being two-point matches.

All five of those went the way of Southeast.

“This team, this year,” Yankus explained, “we’ve been very resilient. We have really handled adversity well.”

In Saturday’s win, that toughness was needed.

In the final set, No. 4-seed Morehead State (23-9) battled the No. 2-seed Redhawks to 15 ties, including to 26-26, before committing consecutive errors to fall.

“That is the big focus,” Yankus said, “how are we going to score this next point? Great, we got that. Now, how do we get the next point?”

The emotional and physical strength of Southeast was evident at the outset.

After playing those five-sets against Murray State, including the final one that went to 21-19, the Redhawk athletes had to bounce back to face the Eagles, which had swept Jacksonville State 3-0 the day earlier. However, Southeast showed no signs of fatigue.

Morehead tore off on a 9-2 run to take a 19-18 lead before Southeast regained its composure with a kill from junior hitter Laney Malloy off an assist from sophomore setter Claire Ochs.

“Our passers putting us in system,” Yankus explained, “allows us to have a balanced attack, a balanced offense. That really has been key for us.”

Redhawk hitter Maggie Adams notched a block to put her team ahead 24-22 in that opening set, but Morehead fought back to tie the set at 24.

Kills by senior Annie Wehrheim and Malloy closed the set.

In the second set, neither team led by more than two points and the Eagles held an 18-17 advantage before consecutive kills from senior hitter Mikayla Kuhlmann kick-started a 7-0 Southeast tear and a 24-18 lead.

Leading 24-19, Kuhlmann finished Morehead off with another kill.

Malloy paced the Redhawks with 16 kills, while also adding 10 digs.

Kuhlmann and Malloy each were named to the seven-member All-OVC Tournament Team along with Ochs.

The 23 victories match the most for Southeast since the last time it won the OVC Tournament in 2000.

The Redhawks now await the NCAA Tournament Selection Show (Dec. 1, 7:30 p.m., ESPNU) to find out where and how they will face.