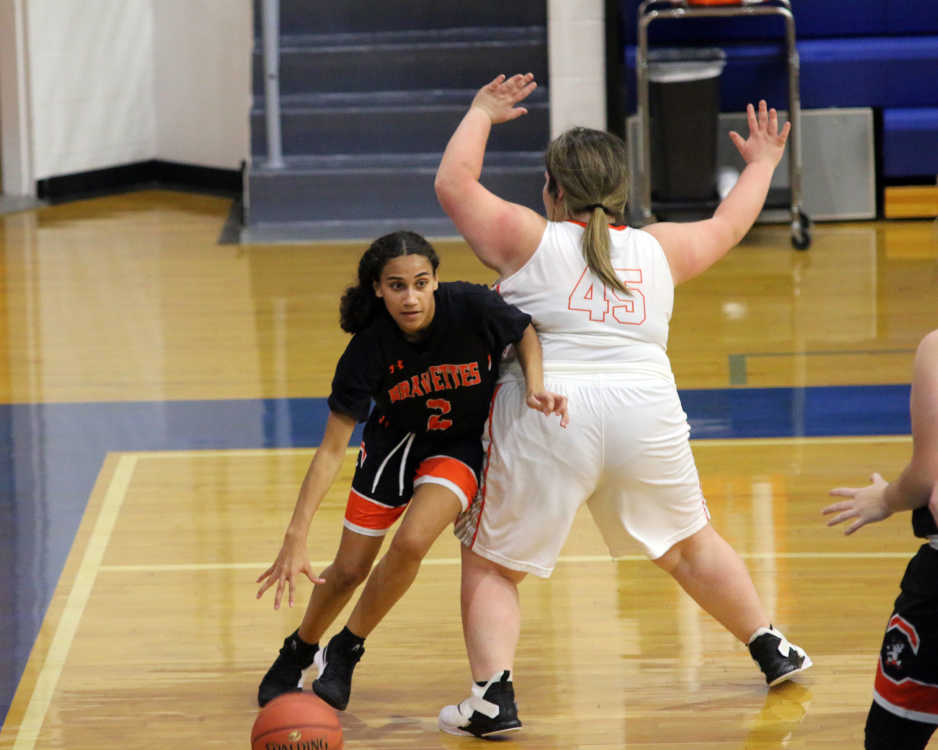 Samantha Coffee and Bre’Asia Jones came out of the gates hot to start the season. Both combined for 49 points and 18 rebounds in the Bravettes 63-21 win over Advance (0-1).

There was nothing the Lady Hornets could do to stop either dynamic scorer, as they both were able to find consistent holes in their defense and make plays.

That, though, is expected considering how long the two seniors have played together.

“They’ve played together so long that they know where each other is going to be,” Scott County Central head coach Andrew Pullen said. “And I think they are going to be even better.”

Coffee shot 9 of 15 from the floor and added five steals. Jones went 10 of 18 and 3 of 6 from three and added six rebounds to the cause. Both were the only Bravettes to reach double-figures in scoring.

Fellow senior Rita Meeker neared the mark but was two points shy. She finished with eight points on 4 of 10 shooting while hauling six rebounds and creating five steals.

Altogether, it was a rough night for Advance, as Scott County Central (1-0) forced 27 turnovers.

“We were in the passing lanes somewhat,” Pullen said. “I think we can do a lot better job. We got a few that we’re still trying to bring along. They’re not used to what we’re doing, but for the first game, excellent work.”

Junior Danielle Markham led Advance in scoring with 10 points on 4 of 10 shooting, and 2 of 7 from behind the arc. Sophomore Alandry Below finished with nine points, on 4 of 19 shooting, while also corralling eight rebounds. 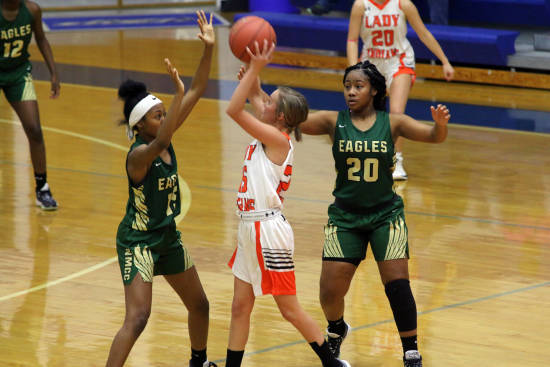 Intense defense turning into easy points was Puxico’s dismay in the second game of the Charleston Shootout against NMCC.

Coming into the season with high expectations, the Lady Eagles showed the Lady Indian’s all they had in a 69-3 drubbing.

Junior Shakyra Wright scored all of her game-high 16 points in the first quarter for NMCC (1-0), on 7 of 12 shooting, while also adding six rebounds.

Junior Ayannah Ruff finished with 12 points on 5 of 14 shooting, while freshman Natavia Betts was the final Lady Eagle to reach double-figures in scoring, with 10. Betts shot 5 of 8 from the floor and also worked on the glass, as she neared a double-double, with nine rebounds.

“I thought they played the top of the press well,” said NMCC head coach Toby Heeb of Wright and Huff. “They got after them defensively, forced some turnovers that led to easy buckets for them — and other people too — and kind of set the tone. That’s what it’s going to have to be for us.”

NMCC forced Puxico (0-1) into 33 turnovers, with quite a few miscues coming off Puxico struggling to find a way to beat the press.

“I thought we were moving well,” Heeb said. “We did a better job of back-tipping and getting back to the ball, which we talked a lot about; played a jamboree last night, and I didn’t think we chased the ball well. Today, our main goal was to chase the ball a lot better, especially when we get beat.” 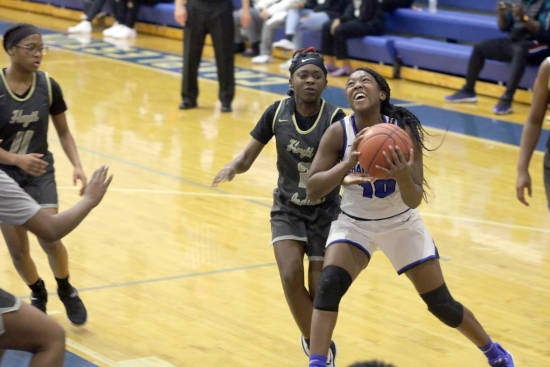 Heading into the season, Charleston head coach Dollette Hall had nothing but praise for junior Mistavia Murray.

On Friday, against Hayti, she answered those praises by nearing a double-double, with a team-high 24 points and nine rebounds, in the Lady Bluejays 67-53 win over the Lady Indians (0-1).

A force with her back-to-the-basket, Murray was able to get in position on-the-block and use her footwork to get into position to score. Even when she missed, she seemed to be right where the miss was and would capitalize.

“She came in every single day, and she worked hard,” Hall said. “She showed us every single day in practice that this [a district championship] is what I want. That’s the way she played tonight. This is the toughest I’ve ever seen her play, and I’m just happy that she’s finally getting it. I told her that as long as you keep coming in and working hard every day and focusing on what you have to do, then you can help your teammates out.”

Murray was one of three Charleston (1-0) players to reach double-figures in scoring. Senior Ashanti Jones had 21, on 6 of 16 shooting, to go along with seven rebounds.

Junior Zycaisha Williams rounded out the Lady Bluejay double-digit scorers, with 12 points, on 6 of 15 shooting. She pulled down six rebounds, as well.

Hayti sophomore Amiya Johnson led all scorers with 29 points, on 11 of 33 shooting. She corraled seven rebounds as well.