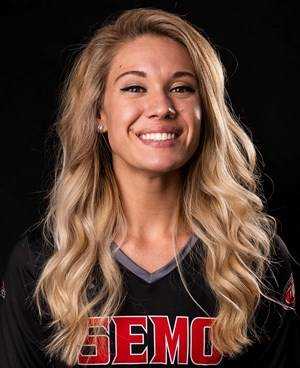 The Southeast Missouri State volleyball team won a dramatic five-set match over the third-seeded Racers on Friday to advance to Saturday’s championship match of the Ohio Valley Conference Tournament in Jacksonville, Alabama.

In the fifth set, Southeast faced match point when Murray State went ahead 17-16 on a kill by Rachel Giustino, but the Redhawks pulled even on an attack error by the Racers. It was the only match point the Redhawks faced. With the score tied 19-19, Claire Ochs put down a kill for the Redhawks’ seventh match point of the set. Emily Bogetto finally sent Southeast into the championship match with her only kill of the day off a set by Ochs, who finished with 43 assists. Ochs also had 13 digs and six kills.

“I give so much credit to our passers for this win tonight,” Yankus said in a press release. “Tara Beilsmith, Ally Dion, Laney Malloy, and Emily Boggetto did a great job of getting us in system so we could run our offense. They did an excellent job of passing against a team who has very aggressive servers.”

For the match, Southeast out-blocked the Racers 17-6.

“We also did an excellent job blocking,” Yankus said. “Our middles worked so hard to close as many blocks as they could and we had a lot of positive touches in addition to 17-kill blocks.”