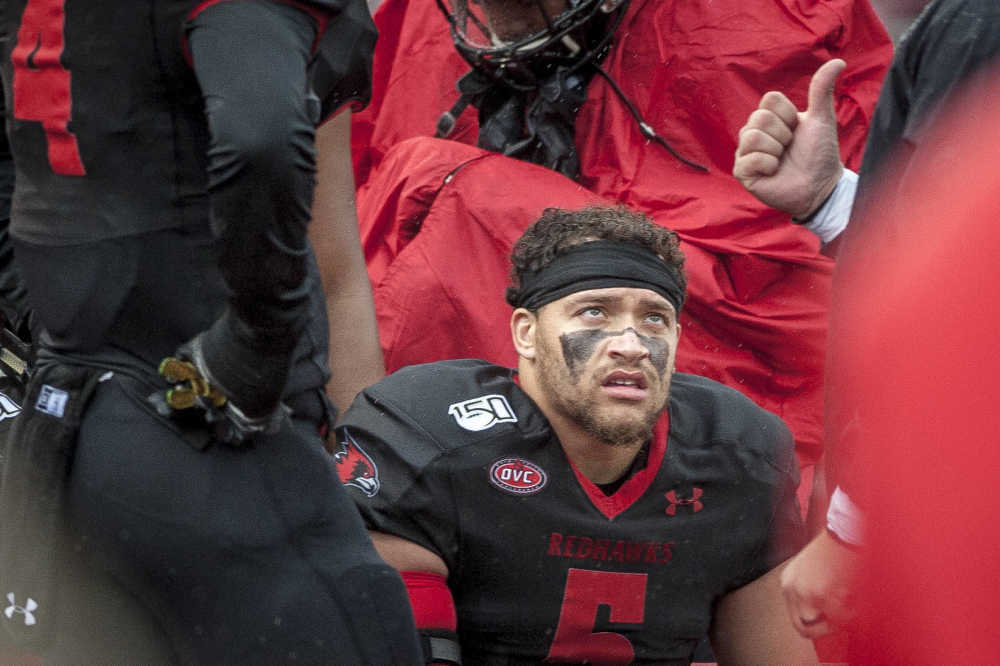 Southeast Missouri State linebacker Zach Hall (5) listens to a coach on the sideline during the Redhawks' game against UT Martin earlier this season at Houck Stadium.
Tyler Graef ~ Southeast Missourian
Order this photo

That is what Matukewicz and his coaches were selling to the current group of Redhawk seniors four and five years ago.

When Southeast linebacker Zach Hall was graduating from Male High School in Louisville in 2016, Matukewicz had been in his position three years and hadn’t had a winning season yet. Having “faith” is all he could sell to Hall and wide receiver Kristian Wilkerson and linebacker Justin Swift and the others, because he certainly hadn’t proven the program could win at that point.

“All of these guys came to SEMO based on faith,” Matukewicz said. “We told them what we were going to do and they believed it.”

That “faith” is easy to have now.

A victory will not only give Southeast its second consecutive nine-win season, but also a share of the OVC championship (if Austin Peay also wins).

There will be 17 seniors recognized for playing in possibly their final home game and looking at the talent in the class, it is understandable why this group constitutes the winningest class in Redhawk football history.

“They had faith in us, our coaches and our players,” Matukewicz said of the seniors. “Now we have the opportunity to finish their legacy off with a co-championship. That would mean a lot to our program.”

The group has not only meant a lot to the program, but to Matukewicz, as well.

He has spent years with these student-athletes, enduring bad times and fantastic times. The kids believed in the Southeast coaches – and vice-versa- when few believed in any of them.

“A lot of these guys didn’t have a lot of other offers,” Matukewicz said. “They just kind of had a chip on their shoulder. They have poured their heart and soul into the program.

“That is legacy, right?”

The Redhawk record book is in shambles now that this group has gone through the program.

Not only in the obvious marks, such as consecutive winning seasons (first at the NCAA Division I level) and total wins, but individually, as well.

Hall is the most renowned defender in program history, while Wilkerson is the most productive pass-catcher ever in Cape Girardeau.

Santacaterina is three touchdown passes shy of being the school’s all-time leader and Swift is climbing the all-time tackles list with each stop.

“We all are leaving a legacy,” Matukewicz said, “and their legacy is that this place is better because of them. We’ll talk about this class for a really long time.”