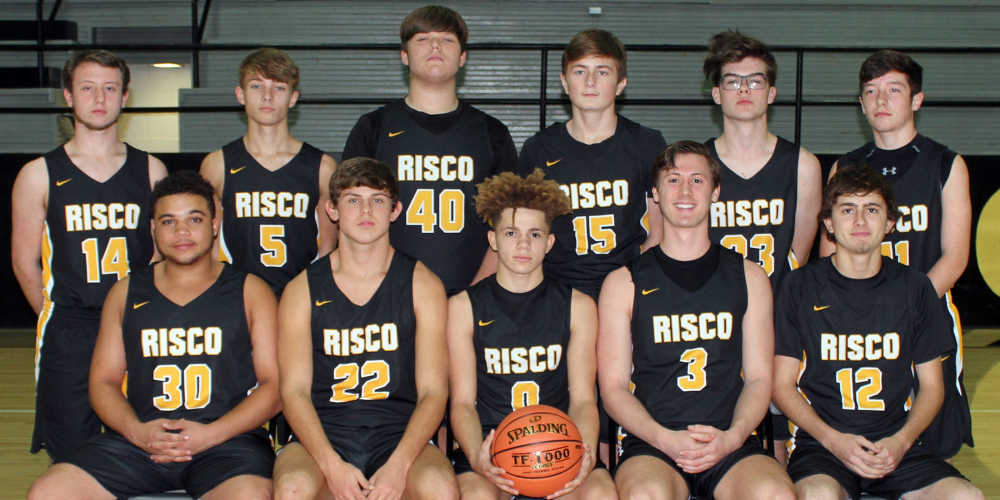 Photo by Dustin Ward, staff
Pictured is the Risco high school boys basketball team. Pictured front row left to right are: No. 30 Tyler Edmond, No. 22 Hayden Ludwig, No. 0 Kamron Meese, No. 3 Andrew Rodgers, and No. 12 Evan Pipkin; pictured back row left to right are: No. 14 Michael Hull, No. 5 Connor Bobo, No. 40 Cadyn Akridge, No. 15 Duncan Hicks, No. 23 Braison Jackson, and No. 11 Ayden Denson.
Order this photo

The Risco Tigers high school boys basketball team enters the 2019-20 season hoping for repeat success with a new group after graduating all of its starters off of last season’s squad that finished 24-6 and advanced to the Class 1 state quarterfinals.

“We graduated six seniors off last year’s team,” Risco longtime coach Brandon Blankinship said. “They averaged 67 points per game. But we have some guys we feel like are playmakers that can step up and score some points for us.”

“We don’t have a lot of upperclassmen and our younger guys are going to have to get better in a hurry but overall we like our group this year,” Blankinship said.

“We didn’t get Andrew until the second semester last year and by the time he got his practices in he only got to play in a few games,” Blankinship added.“But he’s a big, strong kid that we feel like could be a double-double guy.”

Six-foot-two junior guard Evan Pipkin is one of the top offensive talents on the squad.

“He was our sixth or seventh-man last season,” Blankinship said. “He came in and hit some big shots for us last year. He’s grown a couple of inches since last year and every level he’s played at he has been a scorer.”

Five-foot-nine junior Kamron Meese is a strong candidate to be the other starting guard and assume the majority of the ball-handling responsibilities.

“He will be the starting point guard,” Blankinship said. “He’ll also be one of our leading scorers and leading playmakers.”

Six-foot-three sophomore Hayden Ludwig is a developing talent that could eat up minutes in the paint at the center position.

“Ludwig is only a sophomore,” Blankinship said. “He’s been one of our hardest workers throughout conditioning. He should be a solid rebounder for us and an inside presence.”

Risco won every regular-season tournament it was in last season and finished first Class 1, District 1.

The Tigers are in search of its fourth straight Tri-County Conference Tournament title at the varsity level.

“I think Gideon is probably returning the most,” Blankinship said of the conference.“Cooter will also be right there in the mix. Clarkton is also close to the top of it as well. We still feel like we are in that conversation and it is ours until someone proves otherwise.”

Risco’s path back to the Class 1 state quarterfinals is much different this season.

“I would say from top to bottom our district is one of the toughest in the state,” Blankinship said. “Delta brings everyone back and Oak Ridge has the leading scorer in the state. Scott County Central, us, Gideon, and Richland are also in the mix. We think by the end of the year our guys will come together and be ready but it’s a pretty loaded district.”

“It should benefit us to be able to play a couple of games before we start the Bernie Tournament,” Blankinship said.

“There is great competition in it,” Blankinship said. “I think we are the only Class 1 school in it and we were able to win it last season. A lot of the other schools probably have more coming back than we do so it will be a good test for us early.”