Success of SEMO football will spread to sidelines Saturday 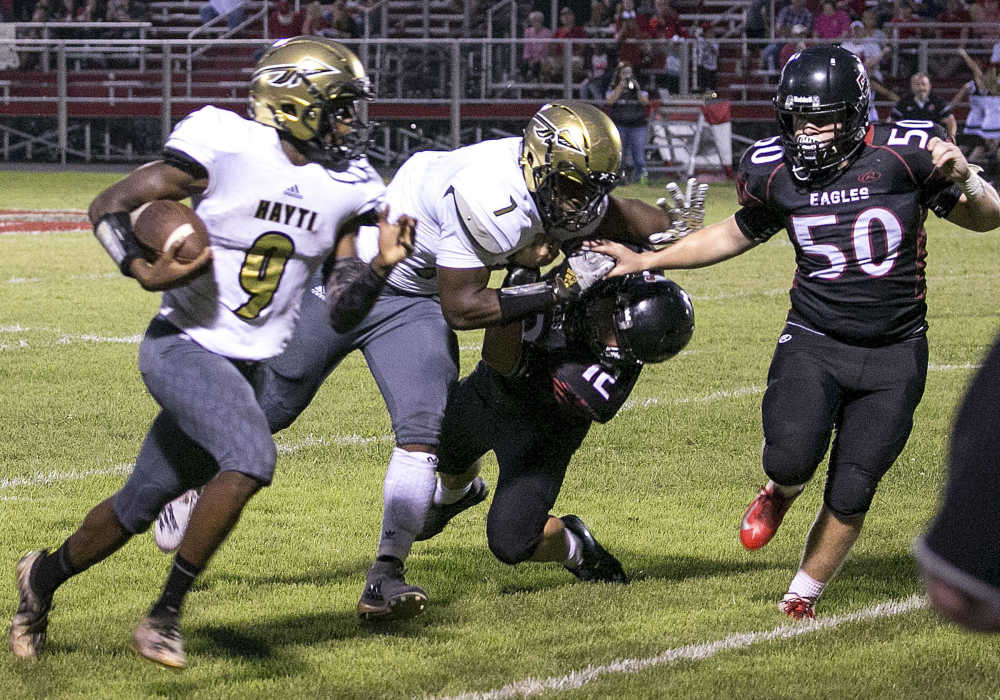 Hayti High School runner TreCharles McCoy (9) follows the block of Indian back Adreian Stevenson (7) on a run earlier this season against East Prairie. Stevenson has been offered a scholarship by Southeast Missouri State and is visiting for the Redhawks' game Saturday.
Photo courtesy of Jerry and Kim Taylor

The scoreboard during the Southeast Missouri State vs. Murray State football game Saturday at Houck Stadium (1 p.m.) will indicate which team is winning ON the field. However, regardless of the score, the Redhawk program will be a success along the sideline.

Southeast will be hosting five talented high school athletes on recruiting visits, which is a direct result of the success of the program over the past two seasons.

Southeast will be playing for its ninth victory and a share of the Ohio Valley Conference championship, which, according to Southeast wide receivers coach and recruiting coordinator Justin Drudik, plays a significant role in securing talent such as these visiting athletes.

“When they know the logo that makes a huge difference,” Drudik said of the program’s brand. “Winning helped last year. Winning makes a big difference.”

No OVC program has done that to the degree of the Redhawks of late.

In the past 16 months, Southeast has won 17 games, while Jacksonville State (15), Austin Peay and Eastern Kentucky (13 each) and the rest of the league (single digits for every other team) trail in comparison.

That success is playing a role in the Southeast coaches building relationships in newer recruiting areas, one of which is northern Illinois.

Benson hails from that region but so do three other Redhawk verbal commits.

Another targeted area that has proven beneficial for Southeast is Nashville.

“Nashville has picked up for us,” Drudik said. “The whole conference is (recruiting) in there, so you have to figure out what fits your system.”

Drudik just recently began visiting schools in that area but his diligence has proven worthwhile.

The Redhawks currently have 13 players from Tennessee, including six who signed last year.

“I’ve only been in Nashville a year-and-a-half,” Drudik said. “So we are trying to make connections. It’s weird. In year one, you are still kind of learning who are the good teams and maybe even the demographics that you are recruiting.

“You have to figure out what works.”

What works is a current Redhawk athlete achieving success, which resonates with the next generation in their hometowns.

Wilkerson is the most productive wide receiver in Southeast history, while Alston is an emerging star. Both are from the Memphis area, as is Brooks, who was offered by programs such as Western Kentucky, Southern Mississippi, Illinois State, Liberty, and UAB before committing to the Redhawks.

“Memphis has actually been really good for us,” Drudik said.