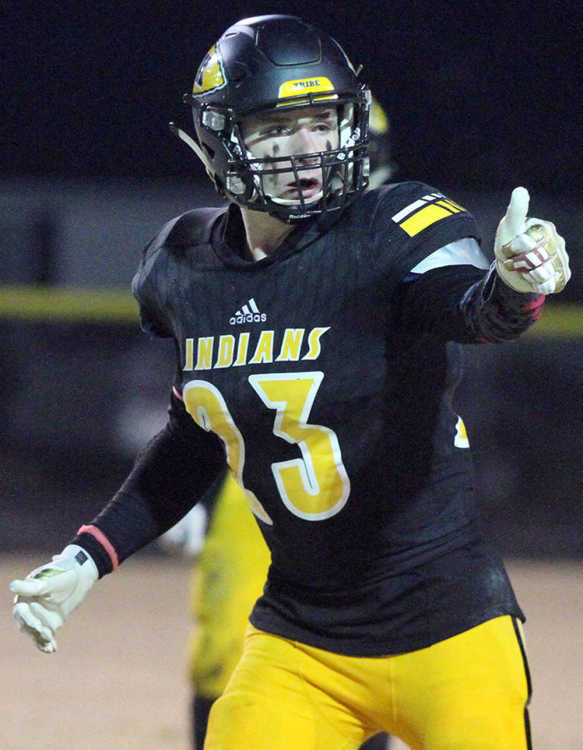 Preventing the big play from happening is a primary focus for the Kennett Indians football squad entering Saturday’s Class 3 state quarterfinal against the Roosevelt Roughriders.

“They are a big-play team,” Kennett football coach Joel Wyatt said of Roosevelt, which averages 43 points a game. “On most of their scoring drives, they score on a long touchdown or have a big play to get them into the red zone. They don’t have a lot of eight to 10-play drives. They like to strike quickly on a big play. We’ve emphasized to our defense that we cannot give up the big play. We need to keep them in front of us.”

Roosevelt’s offense is anchored by quarterback Alonzo Smith who has completed 94 of 168 passes for 1,819 yards and carried the ball 74 times for 562 yards. Smith has thrown 19 touchdown passes and ran for 11 touchdowns.

Smith’s favorite targets are Darrius Jackson and Deablo McGee. Jackson has 33 catches for 785 yards and eight touchdowns while McGee has 39 catches for 911 yards and 10 touchdowns.

“They’ve got two good receivers and a quarterback that is a dual-threat so we will have our hands full with their athleticism,” Wyatt said. “We faced a similar threat with Hamilton and Alexander when we played Caruthersville. Jackson and McGee make Roosevelt’s offense go. You cannot just focus on one guy because they’ve got two threats to catch a deep pass.”

“They are both good corners,” Wyatt said. “Jackson was an all-state corner who had 16 interceptions last year as a junior. McGee, who is the taller of the two, is dangerous on both sides of the ball as well.”

The Kennett defense, which has forced 32 turnovers this season, has found a way to keep its opponents out of the end zone most of the season. Kennett has allowed just six points per game this season. Caruthersville is the only team to score more than 20 points against the Indians defense.

“Our goal, like always, is to be the most physical football team on the field and win the turnover battle,” Wyatt said.

Kennett, which has rushed the ball 419 times for 3,835 yards and passed the ball for 828 yards, is going against a Roosevelt defense that allows 13 points per game.

Quarterback Bodey Ellis, who has missed two games with an injury, has anchored the Indians’ passing attack most of the season. Ellis has completed 40 of 77 passes for 673 yards.

Ellis has thrown most frequently to Carter Maddox and Tanner Duncan. Maddox has 14 catches for 175 yards and Duncan has eight catches for 125 yards.

Sophomore running back Jordan Jarrett and senior running back Marsayv’aun Harrell are the top candidates to race past Roosevelt’s defense.

Harrell has rushed the ball 162 times for 1,818 yards this season. He has a team-high 27 rushing touchdowns and a team-high four touchdown receptions.

Jarrett has moved the ball 60 times for 688 yards. He has 11 rushing touchdowns.

“Roosevelt plays a four-man front on defense from what we’ve seen on film recently,” Wyatt said. “They’ve got a couple of huge tackles. One is six-foot-six, 375 pounds and the other one is 290 pounds. They are a fast defense. But we are going to remain multiple and get in a bunch of different formations. It all starts with the run game with us.”

Kennett and Roosevelt both enter the quarterfinal with double-digit winning streaks.

“Roosevelt just big-played Borgia,” Wyatt said. “They got in some single-wing stuff and caught Borgia off guard. They had three long plays out of this single-wing formation. They just got to the edge and outran Borgia.”

Wyatt believes Roosevelt is likely the toughest team his squad has seen so far.

“Gosnell, New Madrid County Central, and Caruthersville had some similarities with some of their guys and their skills,” Wyatt said. “But I think Roosevelt is likely the best team we’ve faced.”

Kickoff is set for Saturday at 2 p.m. at Metz Cherry Stadium in Kennett. Fans may purchase tickets at the Kennett High School office before Saturday. Admission is $7 with children five-and-under being admitted free.

“It’s supposed to be nice weather and the game is in the middle of the afternoon on a Saturday so hopefully everyone comes out,” Wyatt said. “It’s the first time there has ever been a state quarterfinal at Kennett so it’s kind of a historical moment. We want this community to get behind these kids and get to the game because they really feed off the support. They get excited when it’s packed like it has been a couple of times this season.”