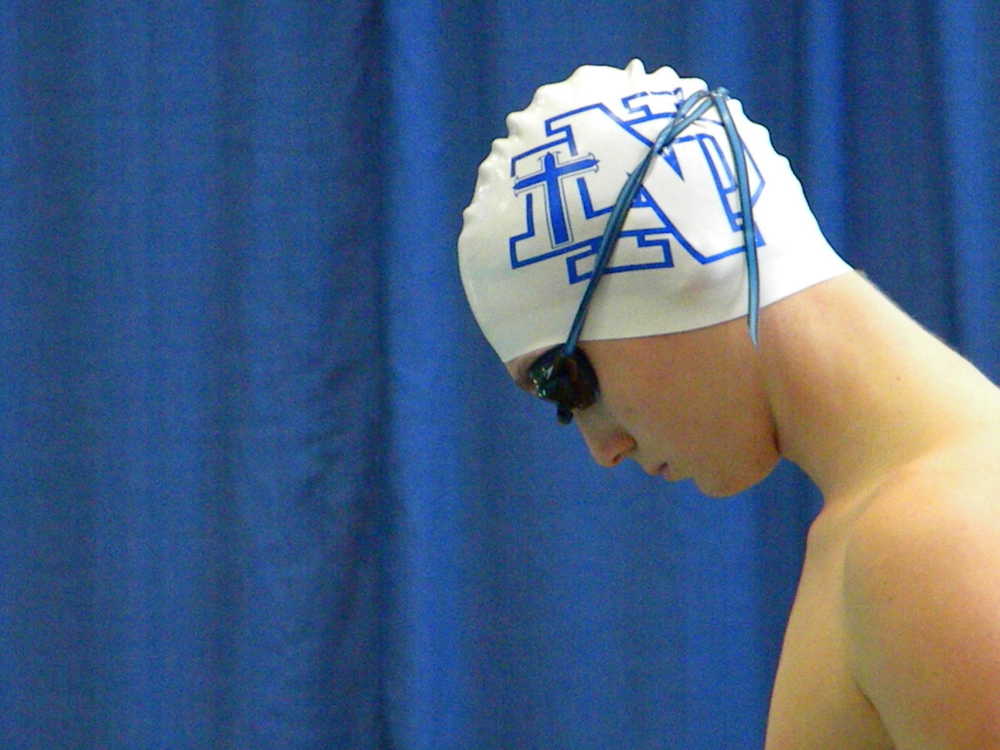 ST. PETERS, Mo. – The Cape Girardeau Central boys swim team had its streak of consecutive MSHSAA Class 1 state championships snapped at three Friday, as the Tigers finished runner-up to champion Glendale 247 to 222, but the Tiger swimmers found solace in the fact they turned in several strong performances at the Rec-Plex in St. Peters, Mo.

“We saw this group (of seniors) coming years ago,” veteran Cape Central coach Dayna Powell said. “We had a couple of guys ahead of them, but it’s been quite a ride. They have done things that we never dreamed of a team from Cape Central could do.”

Tiger seniors Jacob Bening and Daniel Seabaugh closed out their careers with a combined 19 MSHSAA state titles, while fellow senior Truman Vines was a member of five state championship-winning relays.

Not only was Powell astonished with her group and its achievements, but Notre Dame coach Joe Graves was equally proud of his team.

The Bulldogs brought their largest group of swimmers in the history of the program to this year’s meet and Notre Dame burst onto the statewide scene with a ninth-place finish, as it scored 99 points.

“It means a lot,” Graves said of the placement. “It’s my alma mater, so there is the connection to the school, but honestly, that has nothing to do with it. This group of young men is special. I’ll never have another group like that.”

The Bulldogs placed all three relay teams, led by a fourth-place finish in the 200 free relay.

Junior Drew Barber led off that squad, followed by junior Liam Arnzen, junior Caleb LeGrand, and senior Nicholas Hux. The group swam a time of 1:29.68 despite a crazy lack of experience.

“Our free relay which scored fourth,” Graves chuckled, “actually didn’t have a person on it that had swum before high school.”

He said LeGrand (“a really good basketball player”) and Arnzen (baseball) “only swam to humor me.”

Barber, LeGrand, and Hux teamed with junior Nick Landewe in the 400 free relay and smoked every other team in the consolation heat for a ninth-place finish in a time of 3:17.78.

“The way these guys have trained and interacted with each other all year long,” Graves said, “it’s why I coach.”

Landewe, senior Joey LeGrand, sophomore Connor Hux, and Arnzen took 12th in the 200 medley relay, while Nicholas Hux placed sixth in the 200 free and fifth in the 500 free.

Barber swam to a seventh-place finish in the 50 free and Connor Hux took 15th in the 100 fly.

Jackson’s lone participant Friday was sophomore Trent Pallus, who finished 16th in the 100 breast, but first-year Indian coach Riley Talbut felt just competing Friday was a victory for his program.

“I look at this as the best place we can start,” Talbut said, “having a kid get to finals after not having a lot of success the last few years.”

The Cape Central 200 medley relay team of Bening, Seabaugh, Josh Glenn, and Atticus Vines won the 200 medley relay, as did the Tiger quartet of Seabaugh, Truman Vines, Jack Maxton, and Bening in the 400 free relay.

Individually, Seabaugh won both the 200 free and 500 free races, the latter being in Class 1 record fashion.

“I’m so proud of them,” Powell said. “Today, we fought the battle. We were out-manned a little bit, it is a great team in Glendale, but we hung in there. We had injuries and some things to get over, but they fought the fight.”