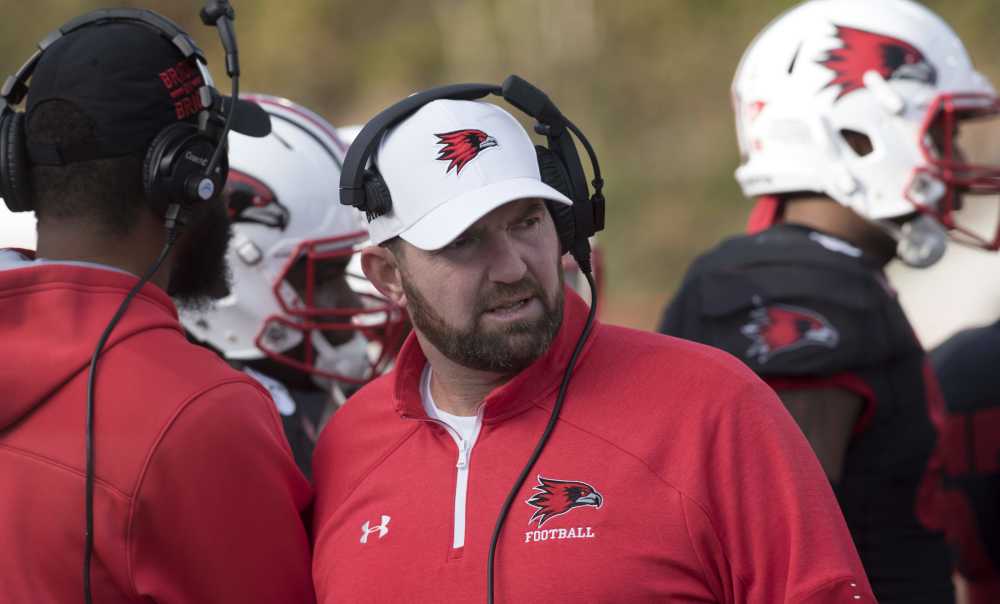 Southeast Missouri State coach Tom Matukewicz looks toward the field during last week's game against Eastern Kentucky at Houck Stadium. The Indians rallied from a 17-point deficit to record a 38-31 victory to improve to 5-1 in the Ohio Valley Conference and 7-3 overall. The Redhawks, who are tied for first with Austin Peay, face Eastern Illinois, tied with Tennessee State in the OVC cellar at 1-5, Saturday in Charleston, Illinois.
TYLER GRAEF
Order this photo

The numbers associated with the Eastern Illinois football program -- meaning the Panthers' 1-9 record -- don't frighten many people. However, the fact that Eastern Illinois won at Tennessee State 49-38 last week is just one indication that it can be dangerous at times.

"I know they will use that enthusiasm from that win to drive their training," sixth-year Southeast Missouri State football coach Tom Matukewicz said earlier this week. "They'll be ready for the Redhawks."

Not only are the Panthers coming off a victory, but they have been competitive despite their record.

The Panthers played UT Martin on the road to a 27-18 score before falling. They fought Jacksonville State to a 28-20 contest and lost at Murray State 24-17.

"Defense is their strength," Matukewicz said. "It doesn't matter... people haven't scored a lot of points against them."

Matukewicz preaches toughness and effort from his own defensive players, so it isn't surprising that those traits he sees from the Panthers and he admires them.

"I love how hard they play," Matukewicz said. "They are very physical. On defense, that matters."

Matukewicz had to cancel a day of practice this week due to inclement weather but for the remainder of the week he only made slight adjustments.

"You better suck it up, buttercup," Matukewicz laughed.

The colder temperatures do negatively impact the athletes' concentration levels, so the Southeast coaches shortened some practices a touch but Matukewicz said it is good preparation for today.

"It's going to be cold on Saturday," Matukewicz said, "so you have to get used to it."

The temperature is expected to be in the upper 30s in Charleston, Illinois, on Saturday.

Senior linebacker Zach Hall has been so spectacular for so long, he sometimes can be taken for granted. However, he is playing his best football -- on and off the field -- of late.

After totaling 29 tackles in the first two games of this season, the 2018 Buck Buchanan Award Winner (National Defensive Player of the Year) five consecutive games in which he didn't total double-digit tackles. However, in two of the last three outings, Hall has been over 10 tackles.

"You see the same as last year as far as production," Matukewicz said of his star defender. "He makes a lot of plays whether he is stripping the quarterback at (Tennessee State) or the running back (at Tennessee State). He just makes those kinds of plays."

Hall leads Southeast with 91 tackles, including 7 1/2 for a loss. He also has 2 1/2 sacks, seven quarterback hurries and three forced fumbles.

"The thing that I've really noticed," Matukewicz said, "is him on the sidelines. Man, he is constantly leading, constantly talking to his teammates about the game, what is going on, and how we need to go about our business.

"He is doing a great job in leaving his DNA all over this program."