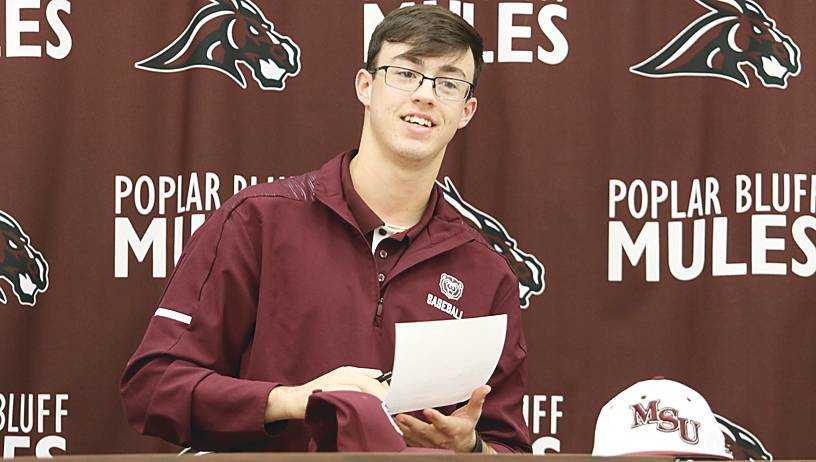 Noah Burkey planned on pitching at Three Rivers College where his father has been head coach for the past 26 years.

Instead, the Poplar Bluff senior signed his National Letter of Intent on Friday to play at Missouri State University.

“That was my plan at first,” Burkey said of playing for his father, Stacey, “but when I got the opportunity to go to my dream school he understood and they supported me through it all.

“I couldn’t thank him enough.”

For the second day in a row, the child of a Three Rivers College coach was signing to play at a four-year college. Kiley Bess signed to play basketball at Saint Louis University on Thursday.

Burkey grew up around the Three Rivers Raiders baseball program and said seeing those players, and how hard they worked, helped shaped the kind of player he became.

“Their work ethic rubbed off on me a lot, and their leadership skills,” Burkey said. “It just helped me out a lot.”

Burkey’s father pitched for the Bears after playing at Three Rivers, and he said his grandfather played football there.

“All I’ve ever known is Missouri State athletics,” Burkey said. “I’ve been around that program since I was a little kid going to camps there and the coaches saw me improve every single year.

“I think that was important aspect of my recruiting process with them.”

In his first three years pitching for the Poplar Bluff baseball team, Burkey has a 3.46 ERA with a 10-5 record over 73 innings pitched, striking out 107.

He said he would rather be striking out opponents than hitting home runs.

“I just love pitching,” Burkey said. “Just feel like there’s no more satisfying thing in the world than striking somebody out on a hard fastball up.”

Burkey said he’s always been a pitcher, just like his father, and always remembers playing baseball.

“My mom always said I was sliding around the house at 32 months old,” Burkey said. “It’s always been in my blood really. Came natural to me and I feel in love with it.”

The Bears, who reached the College World Series in 2003, are coming off a 20-36 season a year after winning 40 games and playing in the NCAA Regionals.

“It was a dream come true to be honest,” Burkey said. “I’ve always wanted to go there.”

Over the last two seasons, the Mules have gone 39-10 and Burkey expects another strong spring for the team.

Edwards said the sky’s the limit for Burkey.

“He still has from to grow and become stronger,” Edwards added. “It’s hard to believe that, he’s a big strong kid, and having the command that he has. You can’t teach that, just comes from hard work.”