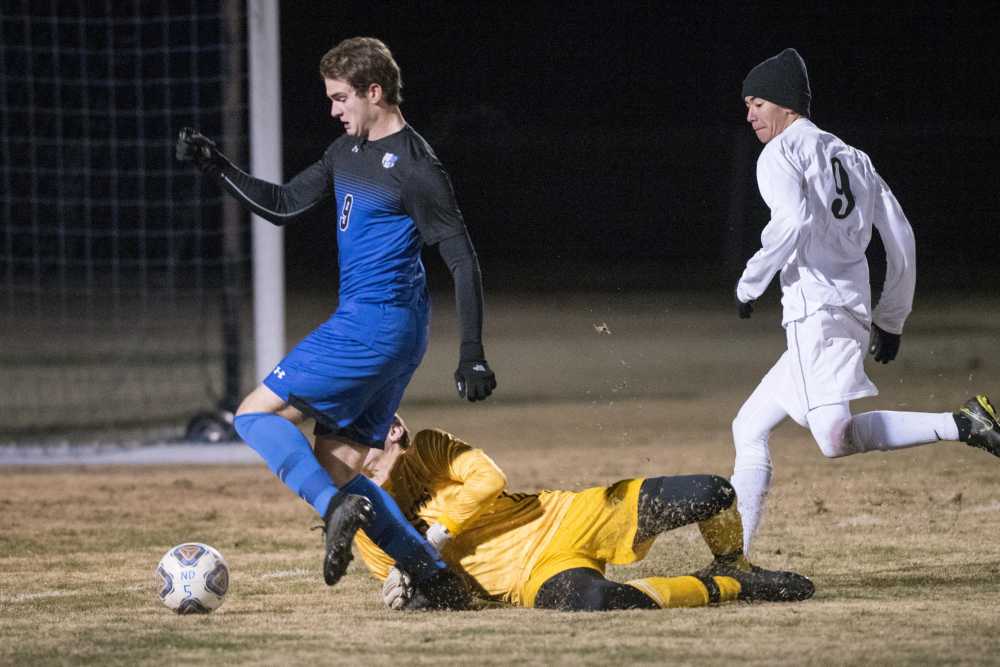 Notre Dame's Griffin Stewart eludes the Lutheran South goalkeeper and a defender on his way to scoring a goal during the Class 2 sectional Wednesday at Notre Dame Regional High School.
TYLER GRAEF
Order this photo

On a frigid night, with players from both teams huddled around portable heaters, host Notre Dame defeated Lutheran South, 6-1 in sectional play Wednesday.

At press time, the venue for Saturday's Notre Dame-Burroughs tilt is undetermined.

Will Dodson got the Bulldogs scoring started just 2 minutes, 30 seconds into the game, as his kick sailed past Lancers goalie Austin Reis.

Dodson would add another goal in the second half.

Afterward, the freshman marveled about the cold at Harry L. Crisp Field.

"It was bad," said Dodson, "and (when) everything starts to freeze, you get stiff, and (the conditions) can lead to (guys) getting hurt."

Two Notre Dame players -- Caleb Garner and Colton Neumeyer, both sophomores -- were knocked to the turf after collisions.

Both left the game but their injuries were determined not to be serious.

Lutheran South coach Kirk Halveland blamed the weather for his team's first half play that saw Notre Dame jump out to a 3-0 lead in the opening 40 minutes.

"The cold was our problem at the beginning," Halveland said. "We were so concerned about the conditions that we came out flat without a lot of intensity."

The Lancers were dressed in long pants and jerseys, while Notre Dame was outfitted in its usual shorts.

One Lutheran South player wore a ski mask against the chill.

Bulldogs coach Matt Vollink agreed that temperatures in the mid-20s acted as an opponent for both squads.

"You have to be mentally tough and I think we were tonight."

Senior Griffin Stewart matched Dodson with a pair of goals of his own for the victors.

Goals by Tyler Landewee and Nick Williams rounded out the Bulldogs' scoring.

The shutout was ruined by the final goal of the night, a 25-yard bullet by the tallest player on the field -- 6-foot-5 inch Lancers senior Joseph Huster.

"Now that was a phenomenal shot," admitted Vollink.

"(Huster) led us in scoring this season," Halveland said. "He's all heart and there's no quit in him."

"There was a lot of slipping and sliding on this field," Huster said.

"But (Notre Dame) had to play on it too and they overpowered us."

"(Crisp) is a much bigger field that we're (normally) used to playing on," Halveland said.

Notre Dame outshot District 2 champ Lutheran South, 17-8, in a contest that was mainly played in the Lancers end of the field.

Vollink is aware how tough a foe the Bombers will be this weekend.

"There's a reason Burroughs is No. 1 in the state," said Vollink. "They defend well and create good chances."

"It will be an exciting game for us."