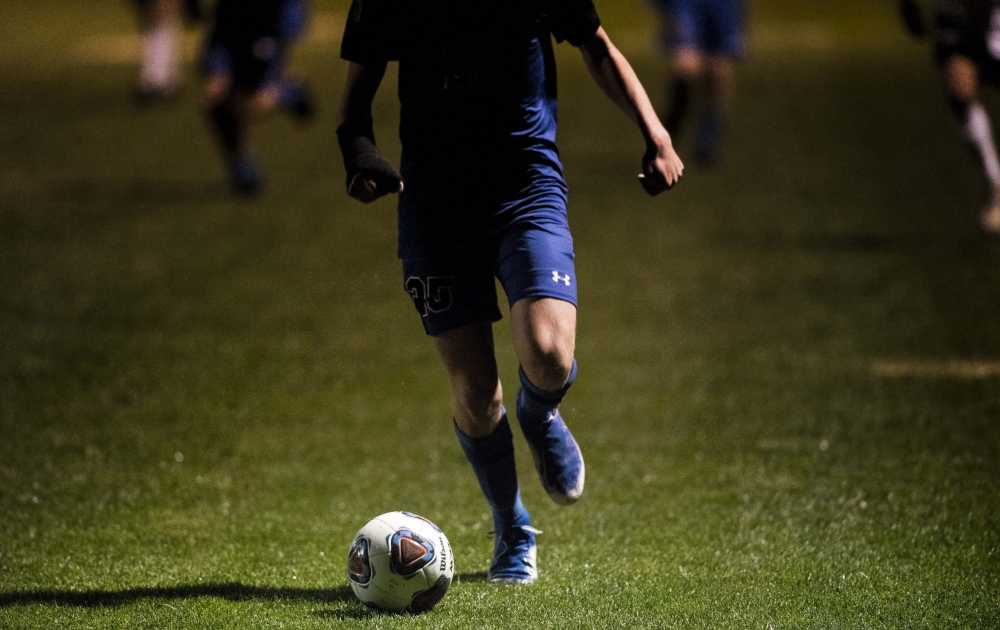 A Notre Dame player is briefly illuminated by a flickering floodlight during the Class 2 District 1 final last week at Perryville Soccer Complex in Perryville, Missouri.
TYLER GRAEF
Order this photo

It's postseason football time in Southeast Missouri. Scott City, Cape Girardeau Central and Jackson are all playing in their respective district finals Friday.

Notre Dame Regional High School is not involved in those playoffs -- because the Bulldogs don't compete on the gridiron.

"All the time I'm asked who we're playing on Friday," Graviett said. "When I answer 'nobody,' they're surprised."

"Soccer is our football."

As far as Graviett and Notre Dame is concerned, their "football" -- as soccer is known outside of the United States -- is reaching its best part of the season, with the school hosting Lutheran South in a Class 2 boys soccer sectional game at 6 p.m. today.

But it's not the type of football Graviett grew up watching in his hometown of Chaffee, Missouri, where the Red Devils wore helmets and pads under lights in the fall.

"(You worry) about sustainability, (about) student and community interest," Moyers said. "Equipment, maintaining a field, finding coaches, transporting a large number of players, support personnel and the band to away games are just some of the things that go into a budget."

Kelly High School added varsity football in 2014, while Doniphan began fielding a high school squad again in 2018 after discontinuing the program in 1979.

Doniphan's school board, according to Southeast Missourian reporting, was told in 2016 that $400,000 would be needed to establish a varsity squad.

Kelly and Doniphan are bucking a growing national trend that shows falling football participation in every sector of the nation.

The New York Times, citing statistics supplied by the National Federation of State High School Associations, reports participation in 11-man football across the nation has fallen more than 10 percent since 2009.

"This is the first year that we've seen a decline in (football) participation overall," Maurer said. "Whether (the drop) is due to fears of head injuries or concussions, I don't know."

Graviett said the fear of traumatic brain injuries is not a reason why Notre Dame doesn't have a football program.

"Back in the early 2000s," Graviett said, "I was on a 15-member Notre Dame committee that studied adding football."

Graviett said the panel did a cost-analysis and used McAuley Catholic in Joplin, Missouri, as a template.

McAuley had football at the time, but with declining enrollment -- the school had an enrollment of 83 students for the 2018-19 school year, according to the Missouri State High School Activities Association (MSHSAA) -- and interest among students, the program has since been discontinued,

"Start-up costs were a concern (for us)," Graviett said, but he claimed money was not a major reason for declining to add the sport.

"We're approved for 600 students and we've already got over 500," Graviett said. "If we brought in a hundred more students, there would be no place to put them."

"Besides," Graviett said, "it's not easy to get from zero to success (in football)."

Graviett said football would require adding another gym and a locker room in addition to adding coaches and making accommodations for a band.

The Bulldogs' athletics director is eager to put one particular rumor to rest.

"We hear all the time that some donor has threatened to withhold funds if we start football," Graviett said. "Not true."

Notre Dame has lost some students to other schools due to the absence of a football program.

Sean Harold, a senior wide receiver for St. Vincent High in Perryville, Missouri, left because he wanted to play.

"It was a very tough decision," Harold said, "but the right one for me."

Graviett said there are no plans to reconsider football.

The school offers athletic programs for both genders.