Column: SEMO football gets contributions from all - and it needed them - in come-from-behind victory 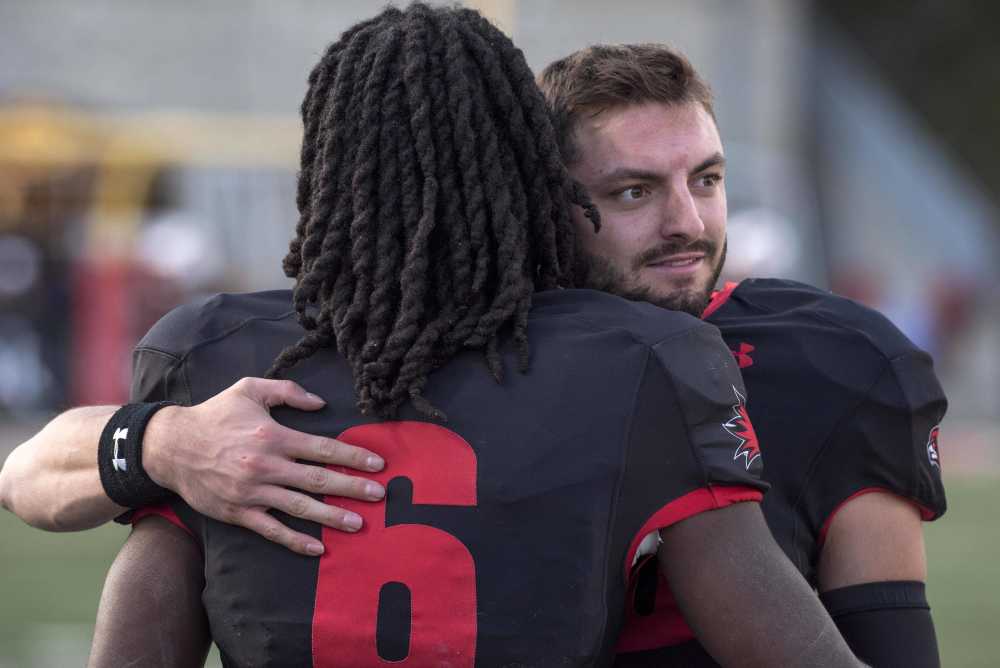 When a football team is trailing 31-14 with 25 minutes left in the game AND it is facing an opponent that has based its entire offensive scheme on running the ball and eating clock, the team that needs 17 points is in serious trouble.

“I haven’t been around a lot of teams that overcome that,” sixth-year Southeast Missouri State coach Tom Matukewicz said.

The Redhawks got tremendous play from all components of its arsenal – eventually - Saturday at Houck Stadium to rally for a 38-31 win over Eastern Kentucky in front of 3,750 fans.

The 60-minute journey that the Southeast program took on Saturday wasn’t a smooth ride.

There were the five turnovers (three fumbles, two interceptions) committed by the Redhawks.

There were the four scores (three touchdowns and a field goal) that the Colonels (5-5, 3-3) achieved in their initial seven drives.

But with its back against a figurative wall, the Redhawks – all of them – began to play to their ability.

“I’ve been coaching my whole life, “ Matukewicz said, “you’d think it was over in this game and deservedly so.”

Trailing 31-14 following Southeast quarterback Daniel Santacaterina fumbling in the end zone and it being recovered for a Colonel touchdown, the Redhawks embarked on an 11-play drive, which was capped by a seven-yard scoring pass into the flat to Zack Smith to trim the deficit to 31-21.

Chalk one up for the offense, which had shot itself in the foot repeatedly up to that point.

“I felt like we had (an offensive) rhythm the whole first half,” Santacaterina said. “Even when we were turning the ball over. We (just) needed to protect the ball.”

The Colonels were limited to three-play drives on each of their next three series, one of which ended with Redhawk free safety Bydarrius Knighten picking off Eastern Kentucky quarterback Parker McKinney.

Chalk one up for the defense, which had allowed Eastern Kentucky to rack up 24 points and 224 yards of offense by halftime.

Southeast put together a nine-play drive, which ended with a four-yard run by Zion Custis to pull within 31-28 early in the final period before a 10-play drive ended with kicker Kendrick Tiller booting a 40-yard kick to tie the game at 31.

Chalk one up for the special teams.

“That wasn’t a chip shot,” Matukewicz said of the field goal. “It was windy. That was a huge play.”

Though Southeast had seized the momentum, Eastern Kentucky was still in charge.

The Colonels held possession of the ball and this was the exact situation they tend to thrive in.

“I really only look at how much we are able to possess the football down the stretch,” Eastern Kentucky coach Mark Elder said earlier this week. “That is what matters to me.”

With 5:55 left in the game, Eastern Kentucky ran eight plays for 36 yards, while running the clock down to 1:38.

Facing a fourth-and-one, and inching perilously close to makeable field goal range, Eastern Kentucky handed the ball off to the most productive runner in the league (Daryl McCleskey).

He couldn’t gain a yard.

“Just stop them,” Southeast defensive lineman Clarence Thornton said of his mindset. “Get as much penetration as possible, get behind the line of scrimmage and make a play.”

McClesky bounced and spun off of several Redhawk defenders before freshman linebacker Mike Matthews and sophomore strong safety Lawrence Johnson corralled him at the line of scrimmage.

“Huge,” Matukewicz said. “Going on the road, you ought to pick up a yard if you are going to win a game. But man, it definitely was the play that took us off.”

The Redhawks responded with a six-play, 69-yard scoring drive that took less than a minute to culminate, and when Custis carried the ball into the end zone untouched from 12 yards out for the final score, the total team collaboration was complete.

“One thing about this team is they are not phased,” Matukewicz said of the group facing adversity. “We’ve been down. We’ve played bad and won. We’re just a veteran group, so we still believe to the end.”