COLUMBIA, Mo. — The Van Buren girls cross country team placed in the top four for the first time in program history at the MSHSAA Cross Country championships on Saturday at the new 5,000-meter Gans Creek course.

Poplar Bluff junior Jaden Deaton earned all-state honors with a late comeback for 22nd place to become the fifth Mules runner to place in the top 25 at state and first since 2005. 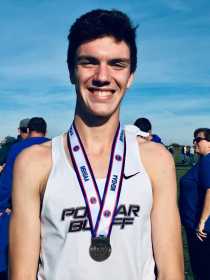 Van Buren’s Katie Griffin earned all-state honors by finishing 21st, senior Hailee Bressler led a pack of Bulldogs that finished within 16 seconds of each other as Addison Lewis and Audrey Bressler followed while Hailey Burke completed Van Buren’s score. Lani Black and Jessica Mays were non-scoring runners for the Bulldogs, who qualified as the District 1 champion.

Thies placed 20th at 20 minutes, 15.7 seconds, her fastest time in four years at state. She finished ninth last year at the Oak Hills course in Jefferson City at 21:14, was 22nd as a sophomore and 20th as a freshman.

Nea claimed the last all-state medal in Class 3 by placing 25th in 19:51.5. The senior finished 0.7 of a second ahead of Moberly junior Isabella Ross, moving up three spots over the final 1,000 meters.

Deaton, who finished 64th at state last year, was 21st after the opening 1,000 meters but dropped to 33rd over the next 1,000. The junior ran his third-fastest split over the final 1,000 meters to move up four spots and earn an all-state medal.

His time of 15:57 was a personal best as he joins Arthur Waddle, John Myers (three times), Ross MacDonald (twice) and John-Mark Lewis as all-state runners for the Mules.

When Griffin crossed the finish line, seven other teams had already scored their first points. The Bulldogs were sitting sixth after two runners and fifth, 14 points behind St. Joseph Christian, after three runners.

Van Buren’s Nos. 3-5 runners all finished ahead of their counterparts from the third place place team, Lutheran of Kansas City. But the Knights had two runners in the top 20 overall to beat the Bulldogs by 7 points.

Van Buren’s non-scoring sixth runners, Black and Mays, both finished ahead of Christian’s No. 6 runner had a tie needed to be broken.

Since 2001, the girls have qualified for state as a team 11 times and finished in the top 10 seven times.