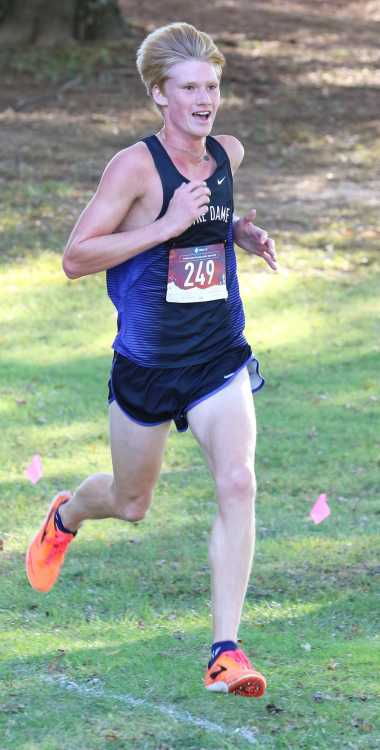 That could change Saturday.

That's when Blake Morris, the Class 3 District 1 champion, will be in Columbia, Missouri, chasing history at the Missouri Boys and Girls Cross Country State Championships.

"This is the sport I love," Morris said. "First place is my goal."

Morris hopes to improve on his district-winning time of 15 minutes, 47:01 seconds.

Notre Dame's athletic director Jeff Graviett believes it'll all come down to a last sprint for victory at Gans Creek Recreation Center, the new 3.1-mile course used by the University of Missouri.

"I can see (a sprint) happening," Morris said, "(but) my hope is to have no one near me at the finish line."

Morris is looking at two other runners, one from Excelsior Springs, the other from Lamar, as his stiffest competition.

"I can't recall their names," Morris said, "but I know how good they are."

Morris has had laser focus on cross country at Notre Dame since his sophomore year.

"I played basketball as a freshman," Morris said, "but the game kept me from training in the winter."

"I want to run in college," said the senior, "and my top two options at this point are Mizzou or Kansas."

Competing at a high level in this sport involves sacrifices from other family members, too.

"My parents, Shane and Jill, drove me to practice before I was (legally) able to drive," Morris said.

"They got me to meets, bought gear -- including tons of shoes and clothes, which are not cheap."

Graviett couldn't be more effusive in his praise of Notre Dame's most elite runner.

"(Blake) is talented enough to play other sports," Graviett said, "but he wants (to be champion). He's got natural athleticism and he's got heart."

Don Maurer is assistant executive director for the Missouri State High School Activities Association, and part of his duties include overseeing all statewide cross country events.

"We're seeing an uptick in kids coming out for cross country in Missouri," Maurer said.

"It's an individual sport, but you also have the camaraderie of a team around you."

Graviett believes that unlike most other sports, you can "feel" success every time you don your sneakers.

"You can see daily improvement when you knock seconds off your last outing," Graviett said. "Cross country running is hard work and has benefits that can carry over into your life and family."

Morris said he is prepared for any environment this weekend, but if he had his druthers, he knows the weather he'd prefer.

"My favorite temperatures are in the 40s or the 50s," Morris said, "with not much wind."

What happens if he doesn't win?

Win or lose, Blake and his parents will be in Terre Haute, Indiana, next weekend for the NIKE Regionals.