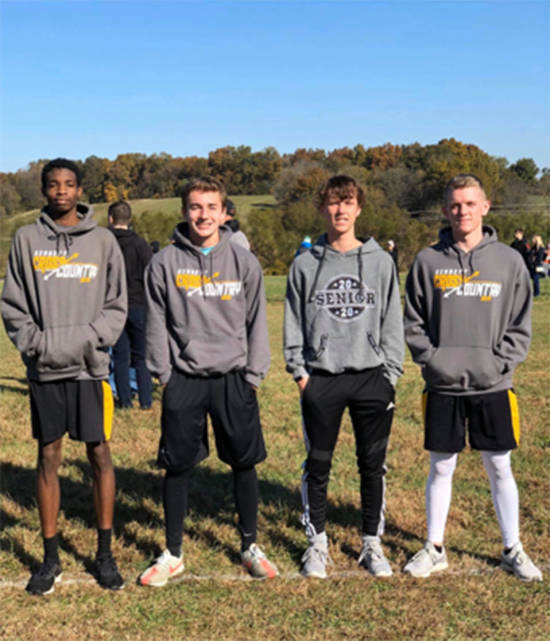 Kobe Patterson was the fastest Kennett runner at the district. Patterson finished 23rd with a time of 18:18.28.

All four Kennett runners completed their season Saturday because only the Top 15 finishers in the district advance to state competition.

It was the final cross country race for seniors Payne, Patterson, and Blansett.

Kennett cross country coach Fred Garmon, who has coached the program since it was relaunched four years ago, issued the following statement Monday:

“Four years ago I was approached to coach cross country. I spent some time learning about it and decided I’d give the best effort I could give coaching the sport. I believe I upheld that. Kobe Patterson, Jack Dalton, Carson Blansett, Ronaldo Guerrero, and Johnathon Jain, better known as the Fab Five, started the program four years ago. I thank these guys for their willingness to try something new and different. Although we lost a few and gained a few others along the way, those guys were the staple of the program. Larry Payne, Brett Bradley, and Alex Yates joined the program and immediately gave their all to the sport. I appreciate them for that. Over the years we’ve had ups and downs as any program does but they stayed committed for the most part and tried to be better each day.

"Competing in the Class 3, District 1 meet was brutal. We didn’t finish where we wanted but the guys ran hard and came out healthy. Teams such as Festus, Herculaneum, and Notre Dame, who have a great tradition with their cross country programs, are hard to beat. In his final race, Kobe Patterson finished 23rd with a time of 18:18. He did not advance to state but I’m super proud of Kobe. He’s taught me quite a bit and I’m glad I’ve gotten the chance to be around him and the other guys the last several years.

"Being in a van with these guys for hours and eating at restaurants you get the opportunity to really get to know these young men and I have a real love for them all. Special thanks to our support system this year - Neal and Kristi Bradley, Jodi Blansett, and David Patterson. Also a huge thank you to Johnny Dalton and Kennett Trust Bank for providing meals to the team this season."