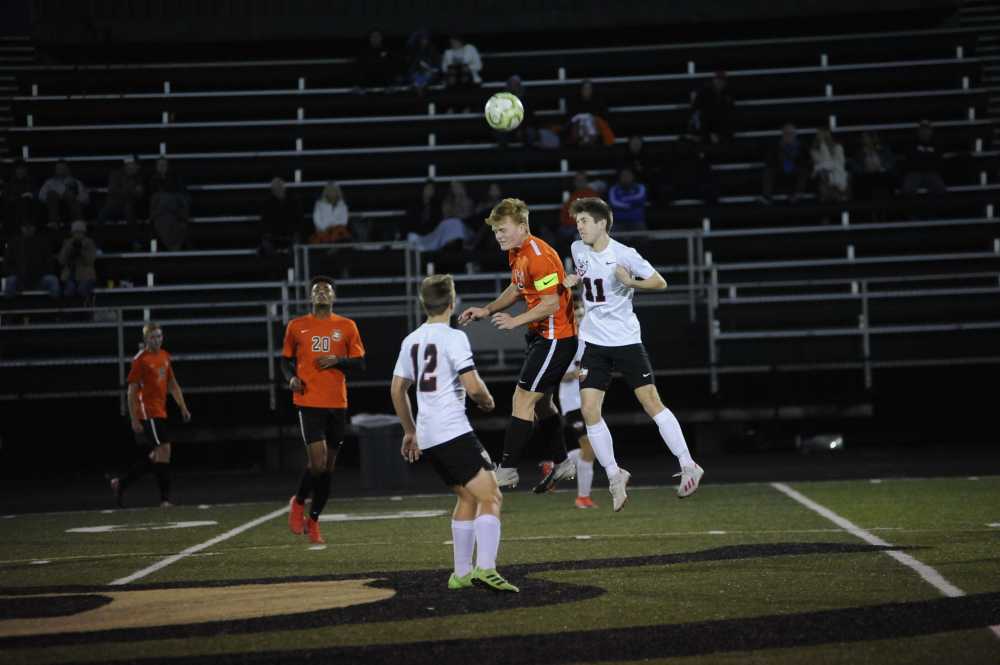 FARMINGTON, Mo. – The good news for the Sikeston boy’s soccer program is that Cape Girardeau Central midfielder Kaya Newkirk is a senior so the Bulldog defenders won’t have to deal with him ever again.

Newkirk is the Tigers’ all-time leader in goals and stretched that record number to 39 in Monday’s 8-0 beating of Sikeston in the opening game of the Class 3 District 1 tournament at Farmington High School.

It didn’t take Newkirk long to boot a shot past Bulldog freshman goalkeeper John Boner. Just two minutes into the match, Cape Central had all of the offense it would need, as a Newkirk goal made it 1-0.

“Kaya is a dynamic player,” fourth-year Tiger coach Jared Dobbs said. “He has speed and agility. His fitness level is extremely great.

Newkirk continually got behind the Sikeston defense to attack. But even when defenders confronted him he had the ball skills to navigate through traffic to get shots at Boner.

Dobbs took over the program when Newkirk was a freshman and even then he possessed the ability to be a varsity player and start, according to the coach.

“He had the qualities of a great player,” Dobbs said of a younger Newkirk. “The past four years, he has matured and grown into the quality player that he is.”

Sikeston (0-23) has endured a trying season, as athletes have been injured or left the program, according to coach Gabe Dement. Of the 25 players in the Bulldog program, 17 are freshman or sophomores.

Dement was forced to play the 5-foot-6 Boner in goal when he had a 6-foot-4 keeper, “who was all-state caliber,” according to Dement, suffer a knee injury.

Boner plays midfield on his club team but was fairly effective against some shots in the second half Monday.

“I’m not sure, honestly, where we are going to use him in the future,” Dement said. “He has potential somewhere for us.”

“It’s just a mindset,” Dobbs said of maintaining focus when the match becomes out of reach. “We have to be prepared every second of the game, every minute of the game, regardless of who we are playing.

“That has to be our mentality.”

The Tigers were working on “utilizing every inch of the field” and “trying to keep the ball wide,” according to Dobbs, which will be needed when Cape goes for its first District title in over a decade (MSHSAA records only go back to 2008).

“We want to switch the point of attack,” Dobbs continued. “Utilizing each player on the field, not just one or two players.”

Newkirk tallied five goals Monday, while senior forward Trece Ayers ended the match at the 67:35 mark when he put Cape Central up 8-0.

The victory was the fifth in the past six games between the two teams over the past four seasons, including the fifth consecutive for Cape Central.

The Tigers and North County were scheduled to play last week, but the match was canceled, so this will be the initial meeting of the two teams this season.

“It’s just been one of those years,” Dement said. “We have some guys that have potential if we can get them to stick with it and hopefully develop.

“But Cape is quality. They are one of those quality teams around.”