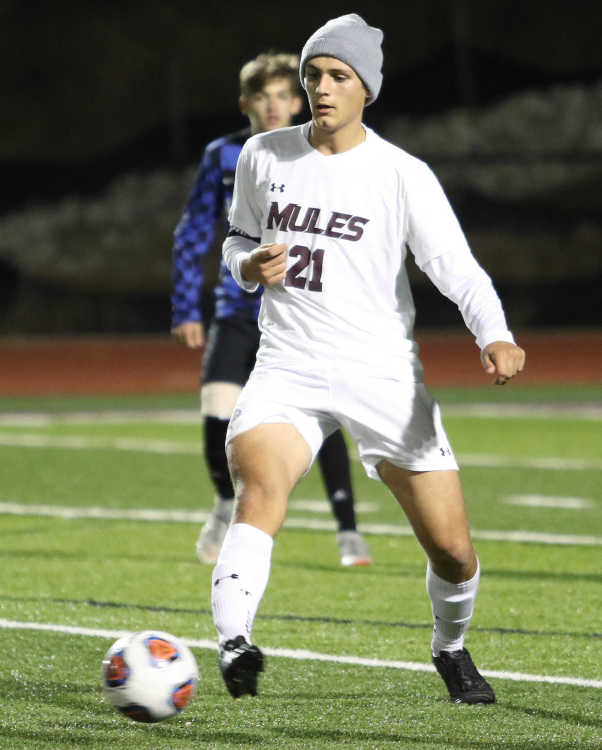 With a hat trick in 34 minutes and another goal early in the second half, O'Dell helped put the Lions back into the district final for a second straight year with a 6-0 win over the Mules.

Northwest (18-7) will face Jackson (14-6-2) for the title at 6 p.m. Wednesday at Mules Stadium in a rematch of the final last year that was decided in penalty kicks.

Jackson, the defending champions, overcame a two-goal deficit in the final nine minutes in the earlier semifinal to win 3-2 in overtime over second-seeded Seckman.

The top-seeded Lions scored 2 minutes, 18 seconds after kickoff when O'Dell was put in on a break. He made it 2-0 in the 17th minute by beating two defenders and redirected a free kick in the 34th minute for the natural hat trick.

O'Dell's shot in the final minutes of the half was stopped by the Poplar Bluff keeper but Joe Noah scored on the rebound for a 4-0 halftime lead.

"I just think we came out flat," Crafton said. "I think we played better in the second half, but again, in district you've got to be ready to go."

Having scored at least one goal in their last six games, the Mules entered the postseason on an offensive roll and were 4-4-1 with multiple goals in six of their last nine games.

Instead, the Mules were shutout for the ninth time this season and the second time by the Lions who won 2-0 on Sept. 13. In that game, there was a scoreless tie at halftime and O'Dell played in the middle, Crafton said. On Monday, he was out on the left side.

"We had no answer for him, no answer," Crafton said. "We did in the first game, we kind of shut them down. They switched it up a little bit."

The Mules had one shot on goal in the first half from 20 yards out that was stopped with a chest-high save.

Quinn Johnson hit the crossbar in the 57th minute as the junior took a shot from 40 yards.

O'Dell scored with 34 minutes left and senior Tanner Boehle added a goal in the final minute for the Lions.

Deona Blair pounced on a rebound to give the Indians a golden goal in the opening minute of overtime Monday night in the MSHSAA Class 4 District 1 semifinal in Poplar Bluff.

Jackson overcame a late two-goal deficit to earn a shot at defending its title.

The Indians scored twice in the final 10 minutes of regulation with goals by Blair and Wil Essner.

"We played hard all the way to the end and gave ourselves a chance," Jackson coach Zack Walton said.

Jackson (14-6-2), the third seed, will face top-seeded Northwest (18-7) in the championship game at 6 p.m. Wednesday. The Lions won the regular-season meeting 3-2 in overtime.

Seckman (14-10) edged Jackson in overtime during the regular-season meeting.

The Indians had the majority of chances in the first half but they were down 1-0 at the break after Seckman scored with 52 seconds left.

"We had a lot of good chances in there," Walton said. "We just needed not to panic and just to continue to play hard and give ourselves opportunities in front of the goal."

Jonah Ritchey deflected in a shot off a free kick from the far left side and Seckman added another goal 1:51 into the second half. Isaac Hoog scored on a break through the right side for a 2-0 lead.

Jackson keeper Luke Mirly made a diving save in the 53rd minute and the Jaguars were later caught offsides.

Essner set up Blair for Jackson's first goal with 9:43 left with a pass through the middle and Blair beat Seckman's keeper inside the near post.

Essner tied it with 6:19 to play when he got a pass from junior Devin Reiminger and scored inside the far post.

Seckman opened the overtime with the kickoff but the Indians gained possession when Essner got a steal at the 35 yards in front of Seckman's goal. His shot deflected off the keeper and Blair came in from the far side to clean it up.

"I think because of the possessions, as much as we had the ball in the first half, and that started wearing on them because anytime you play more defense than offense it wears on you a little bit," Walton said. "It's a good team. I thought they played well."