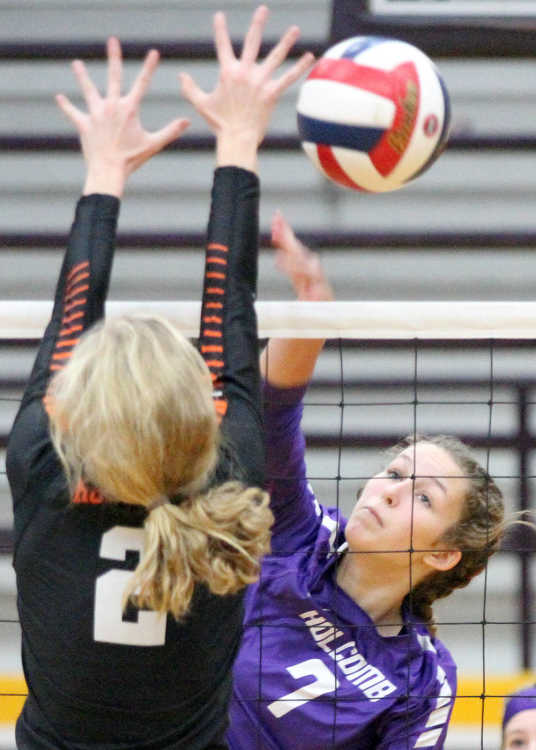 Photo by Dustin Ward, staff
Holcomb's No. 7 Abby Hellebusch attempts to hit the ball around Advance's Nyah Wilson No. 2 in a Class 1 state volleyball quarterfinal Saturday at Bloomfield High School.
Order this photo

BLOOMFIELD, Mo. - The Holcomb volleyball program’s most successful playoff run in school history ended a victory shy of a birth in the Class 1 state semifinals Saturday at Bloomfield High School.

“It’s the first time in school history we’ve won a sectional in volleyball and I am so blessed to have the opportunity to experience that with them,” Holcomb coach Matt Casper said. "Advance is the defending state champion and we knew going into today if we got to them it was going to be tough. Hats off to them because they are a great team and great program that is well-coached. They are going to be tough for any team to beat and they have a great shot of repeating as state champions again. But our girls never quit today and I couldn’t be more proud of what they accomplished to get to the state quarterfinals.”

Holcomb had to rally from behind to secure a win in its first match of the day against Crystal City. Holcomb trailed by as much as 12-8 in the first set before it scored six straight points to move ahead 14-12. The 6-0 spurt that included two ace serves, two kills, and a block by Holcomb junior middle hitter Abby Hellebusch.

“Abby hit the ball well and served the ball well,” Casper said. “She really brought us back in that first set."

Holcomb padded its lead as large as 20-15 in the opening set before Crystal City stormed back to tie things up at 21-all.

The first set was tied at 22 and 23-all before Crystal City moved ahead 24-23 on a kill by Annie Waites. Holcomb took the next two points on a kill by Bailey Cupples and ace serve by Hannah Burk to move back ahead 25-24.

Crystal City (13-14-1) tied things up once more at 25-all on Holcomb’s fifth missed serve of the first set.

Holcomb took the next point on a kill by Macy Houart to move ahead 26-25 and obtained the final point of the first set on a Crystal City attack error.

“I felt like we came out really excited and wanted it really bad,” Houart said of the start to the day. “We worked really hard to get ready for this game.”

Neither team led by more than two points in a closely contested second set until Holcomb scored four straight points to build a 22-17 lead and force Crystal City to burn its last timeout.

Crystal City got as close as three twice after the timeout when it cut the deficit to 22-19 and 24-21. Houart followed by securing the final point of the second set with a kill.

“Beating Crystal City and winning a sectional meant everything,” Holcomb senior setter Addy McClendon said. “It was amazing. It made me so happy.”

Advance (34-2), which is blessed with four players five-foot-ten or taller on its varsity roster, pounded out 26 kills against Holcomb in the state quarterfinal.

Holcomb trailed by only four points at 12-8 midway into the first set before Advance took 13 of the final 15 points.

Advance jumped out to a 15-2 lead in the second set and led by double digits the rest of the way on its way to a straight-set victory.

Advance’s Alyssa Miles and Rozlynn Schrader had 10 kills each against Holcomb.

Bailey Cupples, Hellebusch, and McClendon each recorded a kill for Holcomb. All of Holcomb's kills were in the first set.

“I thought we competed really well early in the first set,” Casper said of facing Advance. “The second set they kind of pounded it on us. But I felt like our girls kept competing until the end and I’m proud of them for that."

Holcomb beat North Pemiscot to secure its second straight district championship earlier this week before moving one step deeper into the playoffs with a win against Crystal City Saturday.

“I thought our season went really well and it shows because we are the first volleyball team in Holcomb history to get to the state quarterfinals,” McClendon said. “I couldn’t be happier for my team and me on how we performed.”

Holcomb put together a four-game winning streak before falling to Advance in its season finale.

“I want to thank the girls for their hard work this season,” Casper added. “I am so blessed to have been a part of their success.”

McClendon served as the primary setter for the Hornets.

“Addy McClendon was our setter and floor captain,” Casper said. “It will be a tough task to fill that role and we are really going to miss her.”

Williams began the season as a hitter before assuming the role of a defensive specialist.

“Sarah started all year for us,” Casper said. “She started the year as an outside hitter. She turned into our libero at the end of the season. She did a great job for us at that position and was one of our most consistent passers.”

"Jessica played her role all year,” Casper said. “She helped us out a great deal in practices and when she wasn’t playing she was always cheering her teammates on from the bench."

Cupples hopes a talented sophomore class, which helped Holcomb placed first at the Tri-County Conference junior varsity volleyball tournament in October, will contribute in a big way next fall.

“I think if we work really hard we can get back here again,” Cupples said. “We have some underclassmen coming up that work their butts off that are ready to move up and contribute.”

Holcomb also has the luxury of returning four starting hitters - Cupples, Houart, Hellebusch, and Burke. All four will be seniors next season.

“I feel like we are going to have the talent to compete at a high level again next year,” Casper said. “We have a lot coming back and a junior varsity group that I think will fit in well with this group. But we know in our area, including in our conference, we have some tough teams. We know it won’t be an easy task to get back to this point again.”