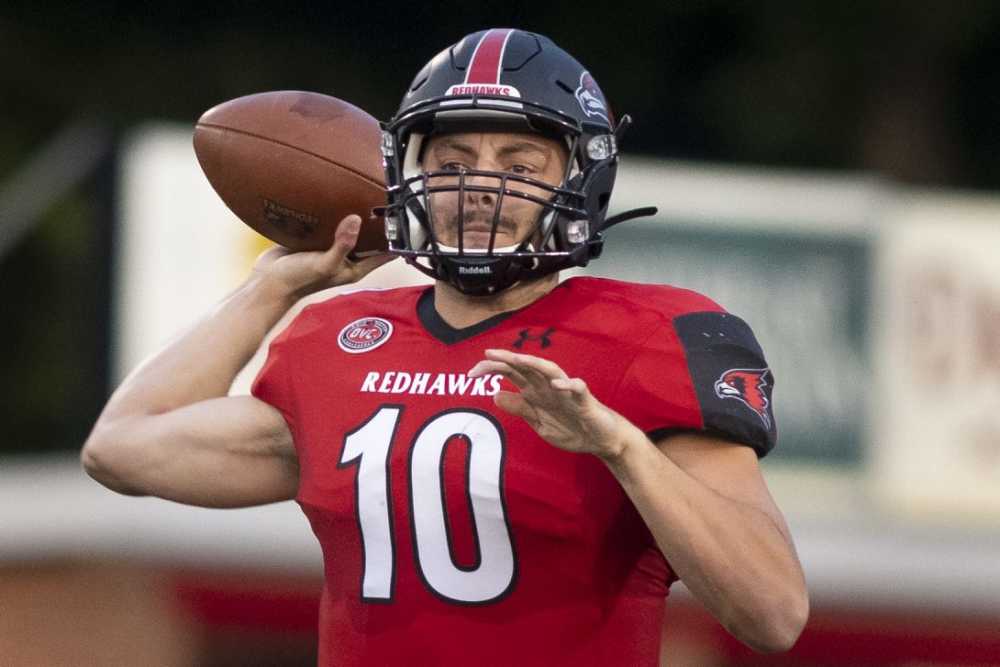 "I think some people were confused," Matukewicz said. "We don't have a quarterback problem. (Santacaterina) is still our quarterback. We have an (offensive) line problem."

To remedy that issue, Matukewicz is altering his lineup up front.

Back-up left tackle Terry Cook will shift to the right side of the line and start at right tackle in place of redshirt freshman Nate Korte.

"We weren't protecting," Matukewicz said of his line play against UT Martin. "And we weren't traditionally running the ball well. That is why we brought (back-up quarterback Joe Pyle) in."

The Redhawk offensive line has been a work in progress since the opening day of training camp.

Following the win against the Skyhawks, Matukewicz referred to his team's passing game in general as being "terrible," but he also was adamant he wasn't singularly putting the blame for that on the quarterback position.

"We've got to snap, protect, and sit in the pocket," Matukewicz said. "We've got to make decisions. The wideouts have to do their thing. It's not one single thing, and it's not going to be an easy fix."

Cook is in his first season with Southeast after playing last season at Cisco College in Texas. He has participated in six games this season with no starts.

The positive for the Redhawks' offensive line is the Tigers aren't great up front defensively -- at least statistically.

Tennessee State is the worst team in the league at stopping the run (219 yards per game allowed), ranks eighth out of nine teams in total defense, and has generated just four sacks in four league games, which is last in the league.

The former statistic will be an intriguing matchup, as the Redhawks have mostly been very effective running the ball this season.

Encompassing the entire season, Southeast has three of the OVC's top nine runners in Zion Custis (53 yards per game), Geno Hess (46.8), and Mark Robinson (46). However, Custis will not be available today due to a shoulder injury.

The Southeast coaches have rotated the backs on a series-by-series basis and in a random way.

In five of the games this season, Robinson has totaled double-digit carries, but in the 24-21 win at Jacksonville State, he didn't have a carry. But Matukewicz said there was no story behind his absence.

"It was just kind of how the game was going," Matukewicz said. "All three were good (against UT Martin)."

Overshadowed a bit by All-American wide receiver Kristian Wilkerson has been the play of sophomore wideout Aaron Alston.

Alston has been really good this season in grabbing 29 receptions for nearly 500 yards and four scores. He had another score on a jet-sweep called back against UT Martin on a Southeast penalty.

Late in last week's win, Alston took a hard spill to the turf after rising for a catch and was immediately taken to the locker room by the Redhawk medical staff. He didn't return to that game, but he is expected to play today.