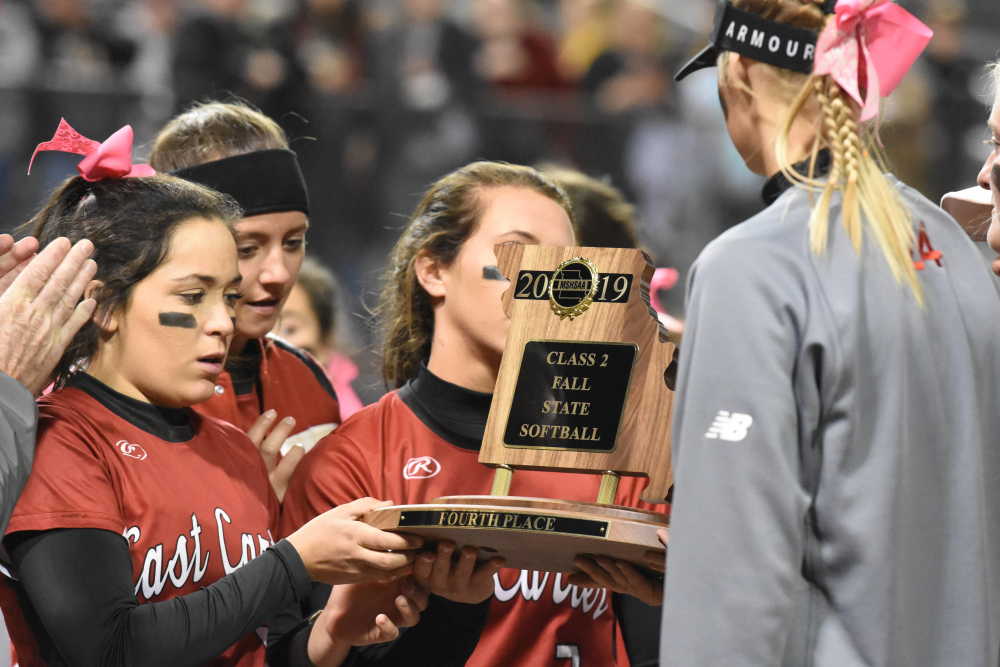 SPRINGFIELD, Mo. - "I wanted this so much for them. They worked so hard," East Carter coach Teresa Kearbey-LeGrand said. "I don't know if it was nerves, if it was the waiting game, the anticipation, the air out of their sails because of the first game. I just don't know, but we just did not look like ourselves."

East Carter lost 6-0 to Marceline in the MSHSAA Class 2 third-place game Friday at the Killian Softball Complex in Springfield, Mo., to finish fourth for the second year in a row and the third time in school history.

Including a 5-0 loss to Sherwood in the semifinals, it's also the second year in a row East Carter didn't score during the final four.

"Everyone had so many expectations for us. Losing, it sucks, it really does," said East Carter senior pitcher Makenna Moore, who finishes with a 20-8 record on the season. "Our entire crowd just expected us to do so much better and we didn't do that for them."

Added senior Naomi Crowley, "We made it twice, back to back, and our community came and supported us. There was a bunch of Ellsinore people here. A bunch."

The Redbirds struck out 15 times and had three hits against a dominant pitcher in the semifinals, but in the third-place game, they faced freshman pitcher Cassandra Rodgers, who had 33 2/3 innings of experience leading into state, and was starting because Marceline's No. 1 pitcher was injured during the other semifinal.

"I'm baffled by this. I'm just really baffled. We hit, we hit the ball hard, but they had good defense. They were coming up with it, and it just wasn't meant to be. I just don't know," Kearbey-LeGrand said.

East Carter had two hits with two strikeouts and no walks in the third-place game.

"Her pitching was the kind of pitching that we had basically been seeing during the whole district run." Kearbey LeGrand said. "Kudos for that pitcher. She didn't lose her cool. She kept her composure for being a freshman."

Rodgers was working on a perfect game when an error in center allowed a runner to reach second.

The Redbirds, who made six errors, fell down 1-0 in the first inning after Ciarrah Bell hit an RBI grounder past a diving Kennedy Thies at shortstop.

In the second, Maisie Billups, who was 3 for 4 with two runs in the game, led off with a double and scored when Sarah Kussman singled up the middle.

In the fifth, Baylee Jobson hit her fifth home run of the season, and following a throwing error by the East Carter outfield, Addyson Schmitt singled to score pinch-runner Gracey Jordan from third.

Marceline added two runs in the seventh on an RBI double by Billups and a sacrifice fly.

Moore allowed eight hits and two walks with three strikeouts in the loss.

"We've had an awesome season," Kearbey-LeGrand said. "That first game, that pitcher was good. (The second game), we just didn't play like we normally play. "