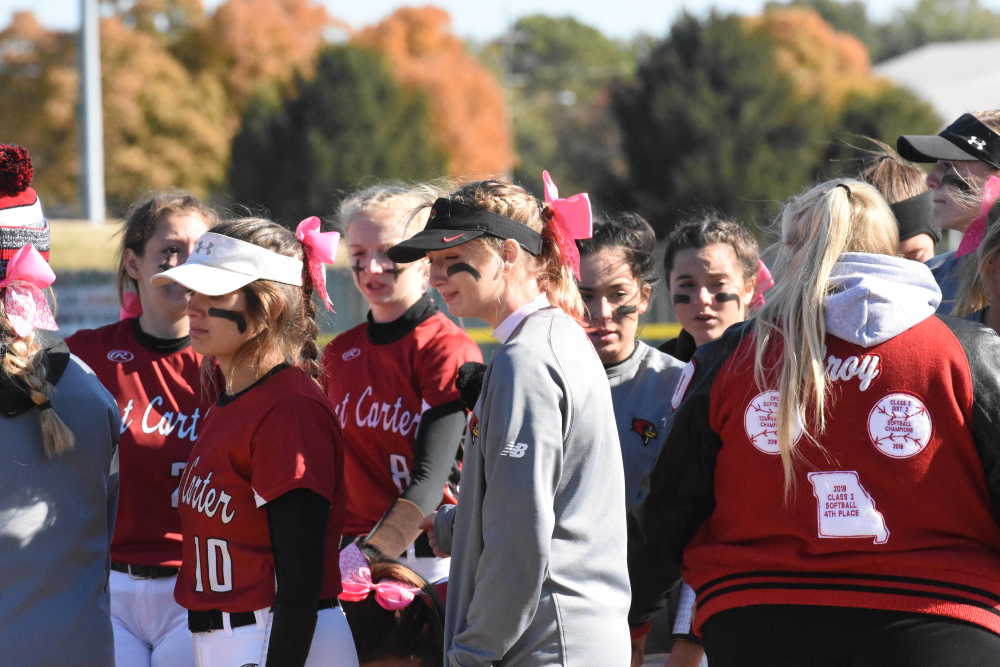 East Carter reacts after losing to Sherwood in the MSHSAA Class 2 semifinals on Friday at the Killian Softball Complex in Springfield, Mo.
DAILY AMERICAN REPUBLIC/Scott Borkgren
Order this photo

The East Carter Redbirds had three hits and put five other balls in play against Sherwood and lost 5-0 in the MSHSAA Class 2 semifinals on Friday at the Killian Sports Complex in Springfield, Mo.

"You build up and build up your emotions, especially with the way we played lately, and you're thinking everything is going to be better than it was," East Carter coach Teresa Kearbey-LeGrand said.

It's the second year in a row that East Carter (22-7) was shutout in the semifinals. The Redbirds lost 2-0 to Trenton last year before finishing fourth overall following an 8-0 loss to Blair Oaks. Heading into the semifinals, the Redbirds had suffered two shutouts this season, both to bigger schools in Jefferson City and Notre Dame.

But while the Redbirds had just one senior last year, this year they had seven.

Rylee O'Dell had two hits in her first two at-bats and Kennedy Thies singled to center in the second for East Carter's three hits.

With two outs, O'Dell was thrown out stealing second in the first inning. Thies' two-out single in the second was followed by a groundout to second.

O'Dell connected for a line drive past the shortstop in the bottom of the fourth and would be the last Redbird to reach base.

"That's been her all year. She's lights out, a great pitcher," Sherwood coach Lonny Price said. "Everything we call for she does. And on top of all the pitching stuff, she comes up to the bat and hits a home run. She's amazing and did an amazing job for us today."

Sherwood pitcher Mackenzie Morgan struck out 15 and also hit a solo home run on a 3-1 pitch in the third that put Sherwood ahead 2-0 at the time.

To prepare for Morgan's fast pitching, East Carter cranked up its pitching machine to 58 MPH in the days between beating Ellsberry in the quarterfinals and playing Sherwood (25-3).

"It's hard to prepare for something like that when you don't see it. Even if we could crank a pitching machine all day long, you're not going to be able to go with that because she moves the ball around. I thought we did good, we put the ball in play, we got some baserunners," Kearbey-LeGrand said. "To know that somebody could pitch 63-64, It's kind of hard to fathom. But that's what they said she was pitching, if not more. All you can do is crank it up, but we didn't crank it up high enough. You can't just learn to do this in one or two practices. And if you do it through your whole season, you're ahead of all the pitchers you face all through the season. So it's between a rock and a hard place."

Sherwood scored in the first inning on a sacrifice bunt, ending East Carter's 35-inning scoreless streak, and the score was still 2-0 in the fifth inning when Sherwood loaded the bases with nobody out.

Moore threw home for the first out, and then the Redbirds tried for home on another grounder, but the throw was high and over the catcher's head for an error and two runs scored.

Alexx Roofener then singled to left to put Sherwood ahead 5-0.

"Just a one or two-run lead, you're a little nervous," Price said. "Even a walk, it could cost you something down the road and that team is really good. They're fast. We've watched them, nobody's scored on them since districts. So you're always nervous with that. So once you get that 4-5 run lead, you feel a little better."

The only other production Sherwood got outside its first three hitters was a pair of walks to Shyanne Janssen and sacrifice bunt from Kelsi Mainard.

Those top three hitters, Grace Parrott, Morgan and Samantha Hook, went into the semifinals hitting .643, .592, and .429 respectively, and each had two hits against East Carter for six of the team's seven total hits and scored four runs.