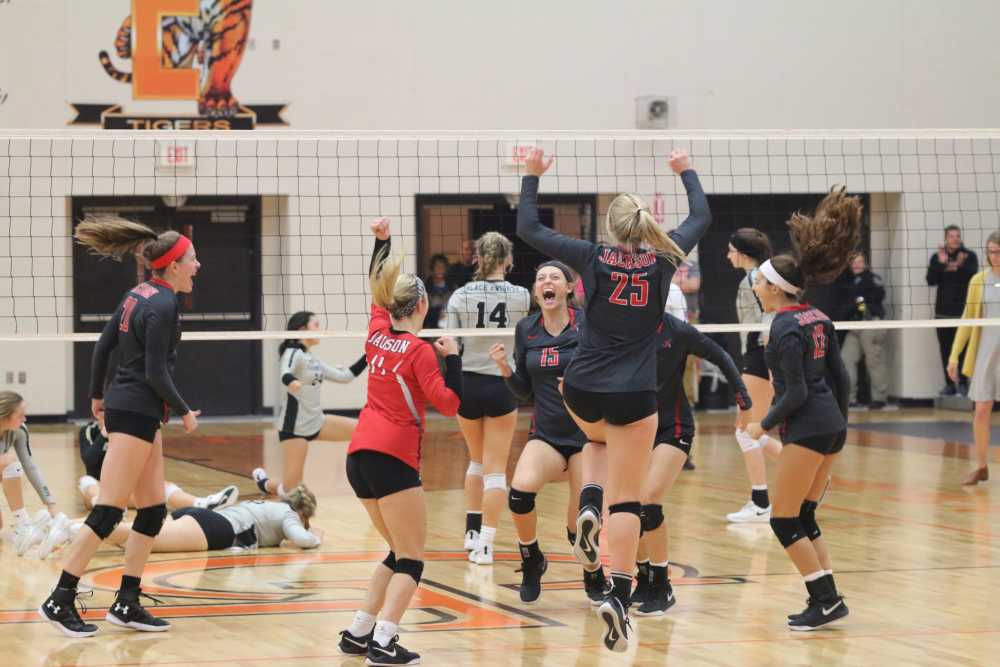 Mackenzie Stoner and Piper Guilliams have seen this story unfold before.

The two lone seniors on the Jackson volleyball team were a part of the program in each of the last two years -- years the Indians' seasons ended in the district championship match to Farmington.

However, this season was different.

A jubilant group of Jackson players swarmed the court after Farmington couldn't keep the third set alive in the championship match of the Class 4 District 1 Tournament at Cape Girardeau Central High School.

Losing was not an option for this team, and was the one thing Jackson coach Dave Mirly engraved into their minds when the first day of practice started.

"We've come so close the last three years," Mirly said. "We've lost in the third set 30-28 my first year, and last year it was a nip-and-tuck game back-and-forth. So, to finally get over that hump against Farmington, it's just so big for these girls. We came in on day one with a goal to win a district championship. The girls believed in it and worked as hard as they could, and I'm just so proud of them."

Each of the first two sets was close, hard-fought matches.

In the first set, the Knightettes got out to a 22-19 lead. Storming back, though, the Indians inched closer and closer before delivering the final exclamation point to win the set.

The second set was much of the same, but went in favor of Farmington, forcing the all-decisive third set with a district crown looming in the balance.

The Indians stormed out of the gates, and wound-up defeating Farmington to claim the program's first district championship since 2015.

The wait was finally over for a group that was clawing for gold.

Having the experience of playing in a big-time moment served Jackson well. It was also something Mirly sensed once the team broke the huddle and headed to the court for the final set.

"Farmington's so good," Mirly said. "They're so athletic. You know, they're young, and they don't realize how big the moment is, so they go out there and play and you can see that the first two sets. I think the third set, our experience kind of got the best of them, plus we passed the ball a little bit better in the third set, which helped open up things a lot more."

Junior setter Madelyn Bourner was key to the excellent passing.

Bourner had 23 assists in the match and placed the ball right in the hitters' sweet spot.

Benefitting off Bourner's strong night were Storner and junior middle hitter Hannah Shinn. Both finished with eight kills each.

Junior libero Katelyn Miller finished with 10 digs as well, to aide the defense.