FROM ONE TO WON: Royals claim district volleyball title a year after 1-win season 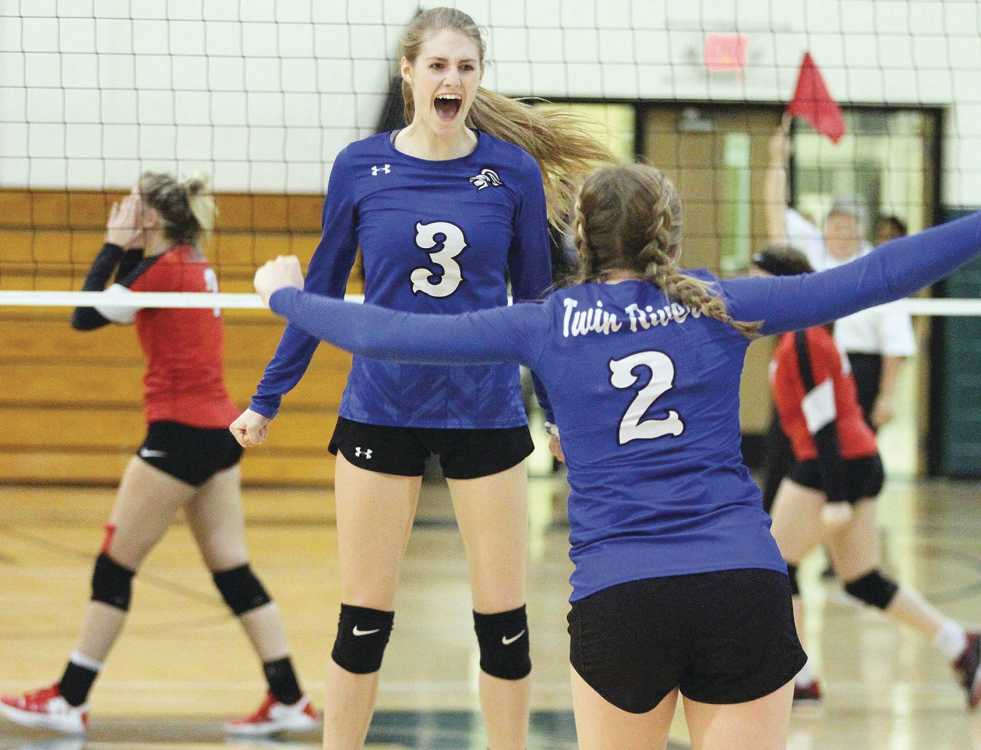 MALDEN — A year after winning just one match, the Twin Rivers volleyball team is headed to the state playoffs.

The second-seeded Royals outlasted the fifth-seeded Senath-Hornersville 25-19, 25-22 in the MSHSAA Class 2 District 1 championship at Malden High School on Wednesday.

“This makes me so happy,” Twin Rivers senior Kristen Withrow said. “We’ve worked so hard this year and the hard work has finally paid off.”

Twin Rivers coach Whitney Edington knew the pieces were in place for her squad to rebound in a big way from a 1-23-2 season.

“Last year they only won one game but they only graduated one senior,” Edington said. “So going into this season I knew it was pretty much the exact same team. I knew the girls and had a bond with them from when I had coached them when they were on junior varsity in the past. I wanted to do what I could to help them bring out the best in each other because I knew that it was there.”

In an effort to get the best out her squad, Edington encouraged her players to fine-tune their skills over the summer.

“We started having open gyms as soon as we could two or three times a week over the summer,” she said. “We also went to camps. We did everything possible because we knew we had a lot to overcome.”

The extra work paid off in a big way Wednesday night with the program’s first district title since 2016.

“It has been an amazing run since last year,” Twin Rivers senior Bri-Anna Harty said. “I’ll never forget this ever.”

Twin Rivers had to finish things out strong to avoid a third set against the Lions (12-15-3). Senath-Hornersville s scored consecutive points on a setting error and attack error to tie things up at 21-all late in the second set and force a Twin Rivers timeout.

The Royals came out and retook control by scoring the next three points to move back ahead 24-21.

“We came out determined after the timeout with the mindset we were going to win no matter what it took,” Harty said. “We were going to find a way to get the final four points and win.”

A kill by Kylie Kulin got Senath-Hornersville within 24-22, but the Royals refused to let the Lions get any closer.

Twin Rivers’ Brianna South tipped a ball at the net that the Lions scrambled to and prevented from hitting the floor. The return hit over the net landed out of bounds, allowing Twin Rivers to celebrate.

“We knew coming in Senath-Hornersville was going to be tough to beat because they are so scrappy,” Edington said. “Their defense is so good and their hitters find holes so well. We’ve struggled at times with our hitters hitting the ball out so we’ve been putting an emphasis on hitting smart instead of just going for it every time. In the end, we got our final point by playing smart and placing the ball where we needed it with a tip at the net.”

The second set was tied 5-all before Senath-Hornersville scored seven straight points to move ahead 12-5. The Lions’ middle blockers helped fuel the surge as Twin Rivers hit five balls over the block and out of bounds.

“Both of my middle blockers — Aubry Jones and Kylie Cook — have done a great job blocking this year,” Senath-Hornersville coach Alex Glover said. “I’m super proud of the way they’ve played at the net.”

The Lions maintained a single-digit lead until Twin Rivers scored four straight points on a missed serve, attack error, kill by South, and ace serve by Jaylynn Williams to move back ahead 21-19.

“It’s was tough going against their block,” Withrow said. “But we knew we had to find a way to get around it and make sure we got it over the net.”

The teams were tied at 6-all in the opening set. Twin Rivers scored 15 of the next 20 points to build a 21-11 lead. The Royals recorded seven kills and a pair of aces during the run.

“They are definitely taller than we are,” Glover said. “We knew we would have to worry about that but tried to do the best we could to get around their size at the net.”

Senath-Hornersville enjoyed a 6-0 run late in the first set to cut the deficit as close as 21-17, but the Royals followed with four of the next six points to win the first set.

“We were very pumped and determined to win this,” Withrow said. “We just gave it our all and went for it.”

“We’ve had ups and downs this season but in the games we’ve lost they’ve fought so hard,” Edington said. “They stayed positive even when close games fell through their fingers. We kept telling them, ‘All these close losses are going to get us ready for the district.’ We’ve had girls out with illnesses and out with injuries, so to say this was an easy journey would be anything but correct. They put in the work every single day and achieved their goal tonight. It’s just so awesome to see their dream come true.”

“We are excited,” Edington said. “We know moving forward will not be easy. The competition increases 150% when you go up north and we know that. But winning the district was our goal. Moving forward we want to continue to work hard and try to get as far as we can, but also be proud of what we have accomplished.”