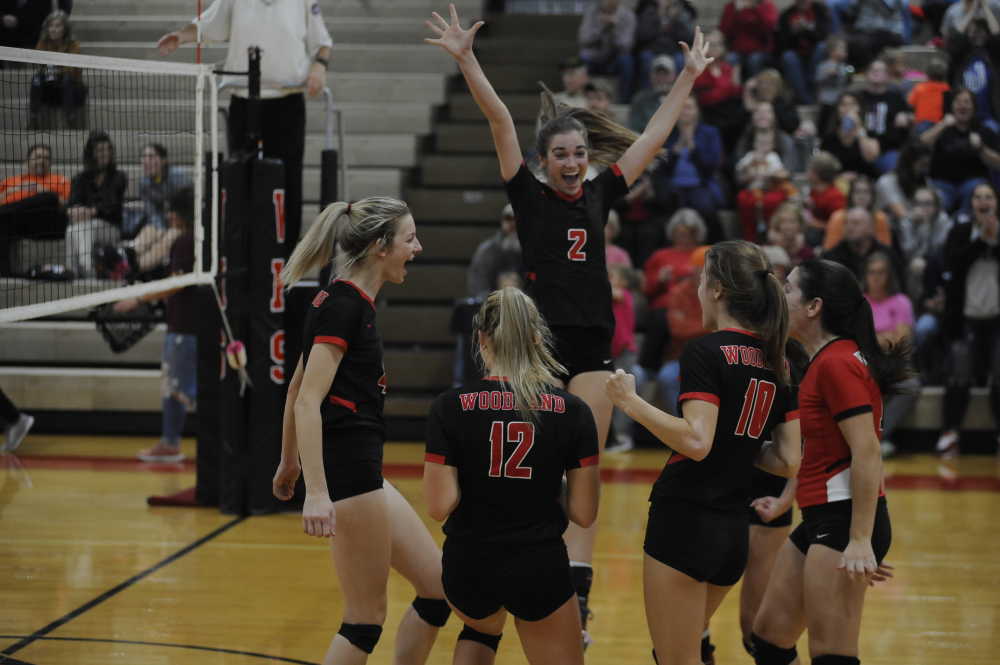 MARBLE HILL, Mo. – Woodland volleyball coach Melissa Rinacke had a message for her Cardinal players Tuesday as the hours passed by leading up to the Class 2 District 2 volleyball tournament.

“It’s just another day at the office,” Rinacke repeated.

“I knew that if they could get that first set,” Rinacke said, “then they could settle in and the second set would be totally different.”

Her plan unfolded, but it wasn’t easy.

The Crusaders (10-21-2) had advanced to the championship game by beating Clearwater in two sets in the semifinal just before the title game. The Saxony Lutheran players were riding a wave of confidence following the earlier victory and it showed.

Saxony Lutheran jumped out to leads of 5-2 and later 10-5, forcing Johnson to call a timeout.

“We went in there knowing exactly what we had to do,” Saxony Lutheran coach Emily Wahlers said. “They had tunnel vision. They went out and hit the holes, they were digging all over the place, and they were blocking where they needed to block.

“And I don’t think Woodland was expecting us to play that well.”

That may have been the case because the Cardinals (24-4-3) were the heavy favorites in the bracket AND were hosting the tournament.

Woodland rattled off four consecutive points following that timeout to pull to within 10-9, but the Crusaders regrouped and got the score to 12-12 before the Cardinals took a lead and they would never trail again.

The Cardinals built a slim 16-14 margin on a communication error by Saxony Lutheran, which allowed a ball to drop in the heart of the Crusader defense and forced Wahlers to call a time-out.

Saxony got the set back to 18-18 on a kill by senior Olivia Spanley, but the back-middle of the Crusaders allowed another Cardinal hit to drop for a 19-18 Woodland lead.

The set was tied at 21 before Woodland got a later block for a 23-22 score, and then a Saxony Lutheran carry made it 24-22 and Wahlers called another time-out.

The break didn’t pay off, as the Cardinals sealed the win on the next possession.

“These girls have never played in a district championship match,” Rinacke said. “They have never felt that kind of pressure.”

In the second set, the Cardinal players didn’t feel any stress at all.

The only senior on the Woodland roster, hitter Maddison Altenthal, opened the set with one of her eight kills on the night and it set the tone for the remainder of the match.

“She is very athletic,” Rinacke said of Altenthal. “When she is on, our other girls just feel it.”

The Cardinals scored the initial eight points of the set before Isabella Deckerd and Spanley teamed for a block to give the Crusaders their first point.

The euphoria was short-lived though, as Woodland scored the next five points and never looked back.

“When we have a couple of kills like that against us,” Wahlers said, “we start to crumble a little bit because we are such a young team.”

This year’s title game may very well repeat in 2020.

Woodland has just one senior, while the Crusaders had just three and played a ton of underclassmen.

“Those younger girls,” Wahlers said, “when they get hammered at like that, it’s a hard time to get them going again. But don’t worry, I’ve got a young team. We’ll be back next year.”

The Cardinals will now host Valle Catholic (25-6-1) Saturday in the Sectional opener.