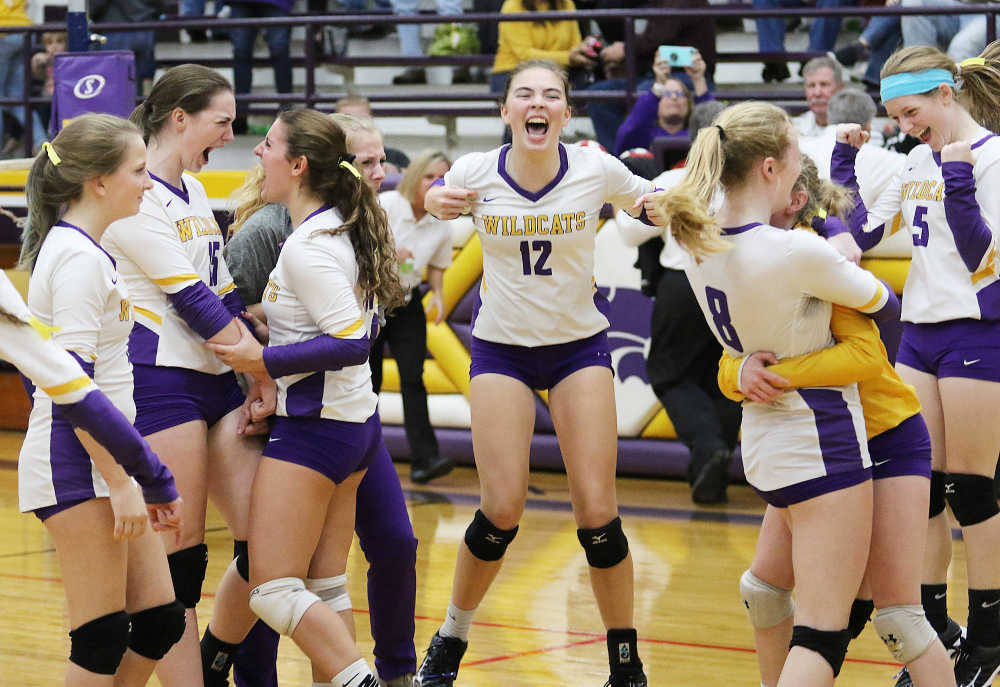 BLOOMFIELD — As the fourth seed, the Bloomfield volleyball team was one of only two in the seven-team district with a losing record.

The Wildcats finished the MSHSAA Class 1 District 2 without dropping a set and claiming the title for a sixth straight year following a 25-23, 25-13 win over Campbell.

"I almost cried when we got that last point," Bloomfield senior Natalie Powell said.

The Wildcats were facing the program's first losing season since 2013, but a tough schedule may have gotten a young team with just two seniors prepared.

"We learned a little bit every game," Bloomfield coach Haley Silman said. "We learned we got to fight. You can't give up any single point."

The Wildcats (14-14-2) will host the sectional, facing defending state champion Advance (32-2) on Saturday.

"That's the one thing me and Eva (Hester) have strived for this year," Powell said of winning the district title. "We're really pushing for it, and here we are."

After beating Clarkton the previous day, Bloomfield upset top-seeded Bernie with a comeback in the opening set to win 26-24, 25-20.

"That was a huge turnaround because it showed that we're not here to lose," Bloomfield senior Eva Hester said.

The top five seeds came in having won 104 games between them.

"It was unreal," Campbell coach Gentry Vancil said of the competition. "It could have been anybody's game tonight and I applaud Bloomfield. Great job and I wish them the best."

There were six ties early to open the match as neither team led by more than two points before Bloomfield put together an 8-1 run.

After an attack by the Camels sailed long, Eva Hester served up an ace. The teams then traded points before a long rally in which the Wildcats made diving plays to keep the ball off the court. Libero Karsynn Phillips crashed into the side of the stage chasing down the ball and the point went to Bloomfield when Melanie Phillips tipped the ball over for a kill.

"She flies all over the floor and the girls know she's going to give 110% so they're going to do the same to help her out," Silman said of her sophomore libero.

Phillips got a block before a kill and a block-kill for consecutive points to end the run and put Bloomfield up 15-9.

Campbell scored the next three points including kills from junior Alexis Pounds and Anna Beth Vancil, who led with seven kills.

The Camels (25-5-2) got with 20-18 on a kill by Caris Foriester but the ensuing serve ended up in the net and Campbell's next serve sailed long.

Karsynn Phillips followed with an ace for a 23-19 Bloomfield lead. Melanie Phillips, who had seven kills, gave the Wildcats set point with a drive in the middle.

Campbell scored the next two points on kills by Vancil and Pounds but a net violation ended the comeback.

Bloomfield opened the second set with an 8-2 run after the teams traded points early. Another 6-2 run put the Wildcats up 16-7 and forced Campbell to take its final timeout.

"We played really well together, we work together, encouraged each other," Hester said.

The Camels got within 17-12 but scored just one point the rest of the way as the Wildcats took control of the match.

"Our big thing was our mental toughness," Silman said. "As the year went on, we just got tougher and tougher mentally every game. You can see tonight, we never let down."

In the opening semifinal, top-seeded Bernie got the first game point in the opener but couldn't close out the Wildcats.

Bloomfield pulled even at 24-all then got a kill from Hester on the left side that deflected off the Bernie block. Melanie Phillps closed out the set with a kill.

Bernie opened the second set with a 6-1 run and led until the Wildcats pulled even at 12-all. Bloomfield broke a 15-all tie, scoring six straight to rally and take an 18-15 lead.

Logan Mayberry's kill got Bernie within 19-17 but Bloomfield scored the next three ending with a kill by Eva Hester. Below's cross-court kill and Bell's drive in the middle closed out the match.

After managing just three points off kills in the opening game of the semifinal, the Camels fought their way back to advance past a 29-win Gideon team.

In the third set, the Camels opened with runs of 6-2 and 7-1 for a 14-5 advantage. Gideon rallied to within 16-11 and avoided match point four times before Campbell closed out the comeback.

There were four early ties in the opening set before the Bulldogs scored 21 of the next 26 points.

Gideon opened the second set with a 5-1 run and led by as much as eight at 15-7. The Camels answered with an 11-4 run as Foriester and Vancil got kills and Blaney Powers added an ace.

Foriester's kill tied it at 19-all but Gideon scored the next three points. Vancil's kill and consecutive aces by Madisyn Townsend tied it at 22-all.

Vancil forced a third set with a pair of blocks for kills then got a free ball for a 25-22 win.

Vancil had 12 kills and Foriester added 11 as the pair combined for eight blocks.

The Bulldogs ended 29-4-2 but will lose just one senior in libero Madison Long. Kinlee Lawrence led Gideon with eight kills.