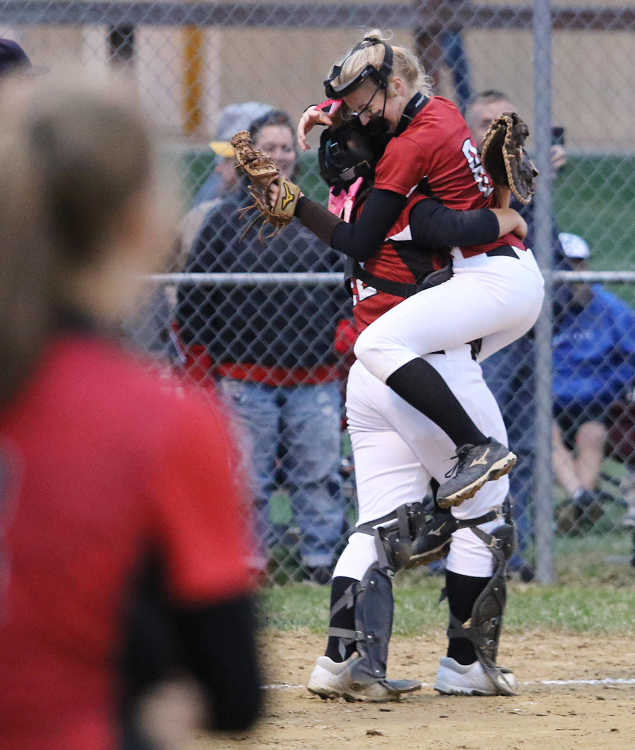 ELSBERRY, Mo. — The Redbirds had another banner day Monday.

With the help of a perfect relay throw, Makenna Moore tossed another shutout and provided the big hit as the East Carter softball team beat Elsberry 3-0 in the MSHSAA Class 2 quarterfinal.

"I was nervous, obviously," Moore said of her sixth inning at-bat with the bases loaded. "My heart was racing."

The senior pounced on the first pitch she saw for a bases-clearing double that broke a scoreless tie and sent the Redbirds to the state final four for a second straight year.

The Redbirds (22-6) will face Sherwood (24-3) in the Class 2 semifinal at 1 p.m. Friday at the Killian Softball Complex in Springfield.

"We're all really close and I feel like we're softball sisters," said senior Hailey Brown who started the sixth inning with a hit and scored.

Moore, who struck out 14, had not allowed a hit through four innings and the Indians had not gotten a baserunner past second base.

Kelsey Pflasterer opened the bottom of the fifth with a blast to left field. She rounded second as Brown, the left fielder, threw to shortstop Kennedy Thies, who threw a strike to third baseman Audrey Carter before Pflasterer got there.

Brown credited a drill the team does in which relay throws determine who must run in practice.

Two pitches later, the Redbirds used a relay to nearly throw out another runner at third base but Mackenzie Gladney slid around Carter's tag.

Gladney's triple to the right-field gap gave the Indians their best scoring chance with one out but Moore struck out the next two hitters on eight pitches.

"They made us earn it," East Carter coach Teresa Kearbey-LeGrand said. "Tough team. You've got to take your hat off to them."

Brown led off the sixth with a single through the left side of the infield and moved to second on a pitch in the dirt that got away from the catcher. Naomi Crowley followed with a grounder up the middle and later stole second without a throw.

After a pitching change and a four-pitch walk of Rylee O'Dell loaded the bases, Moore came to the plate having already singled twice. She lined the first pitch into right field cleaning the bases for a double.

"I usually don't swing at the first pitch," said Moore who is 7 for 12 with eight RBIs in the four postseason games.

"I usually just wait until I get the pitch I want, but that was the pitch I thought was mine."

Moore said she was more nervous in the circle than at the plate with the bases loaded.

"I knew I had somebody behind me that could easily do the job as well as I could," Moore said of Carter.

Moore led off the second inning with a single and stole second but ran into the Elsberry shortstop on Carter's grounder. Carter later reached third with a pair of stolen bases but an infield fly and one hauled in at the fence by the center fielder kept the Redbirds off the board.

Elsberry also had a leadoff walk erased on an interference call in the third inning.

Moore also walked a pair with two outs in the first but a two-strike bunt attempt rolled foul. She hit a batter with one out in the second but struck out the next two hitters.

Heading into the fifth, Moore had struck out four in a row and seven of the first 15 batters she faced.

Moore and the Redbirds extended their scoreless innings streak to 35.

"Makenna is on fire, just on fire," Kearbey-LeGrand said.

Elsberry starter Kylie Kinsler only struck out one but didn't allow a walk over five innings scoreless innings.

"Their energy level was way up there," Kearbey-LeGrand said of Elsberry. "I kept wanting ours to pick up, and then finally we started hitting a little bit better.

"I think nerves kind of played a factor at the beginning."

At the end, the Redbirds got to celebrate twice.

Moore caught a grounder and threw to first for what appeared to be the final out, but an umpire had called timeout due to lights from a truck in the outfield. Instead, the final out was Moore's 14th strikeout.

The next celebration would be a historic one with the Redbirds losing their last two semifinal appearances.

The winner Friday advances to the championship game at 2 p.m. Saturday while the loser plays for third at 5 p.m. Friday. Palmyra (20-8) and Marceline (22-4) will play in the other semifinal Friday.