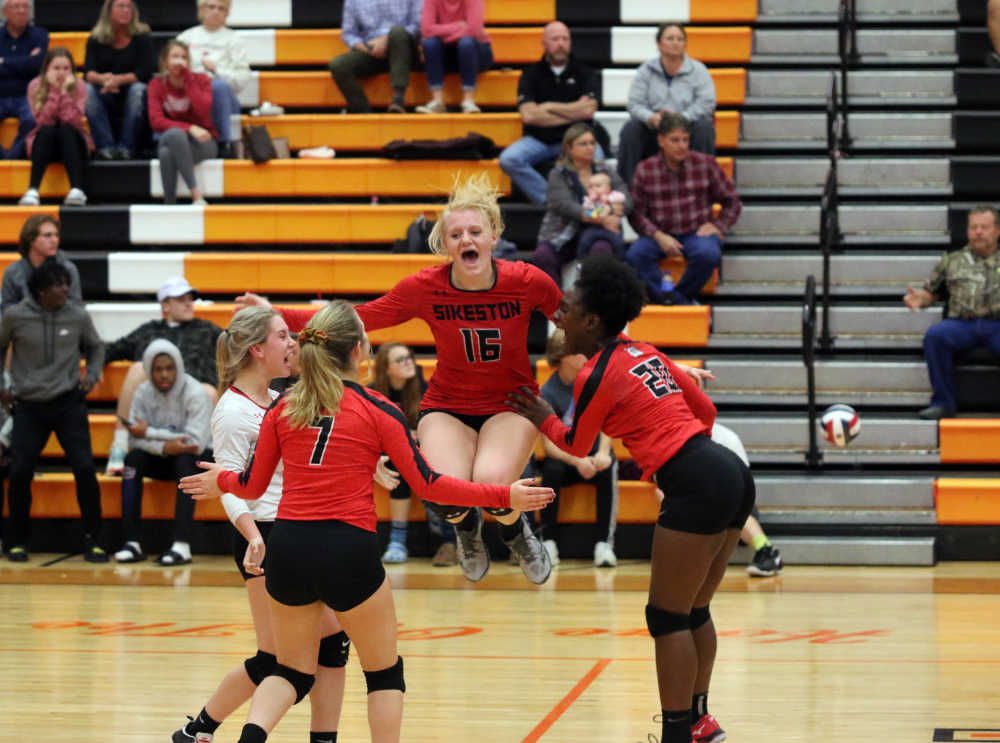 The Sikeston Bulldogs celebrate after winning a set, against Cape Central, in the first round of the Class 4, District 1 Tournament, on Monday, Oct. 28, 2019, at Cape Central High School, in Cape Girardeau, Mo.
Alex Wallner/Standard Democrat

CAPE GIRARDEAU, Mo. -- It was all but fitting that two rivals took the court in the first round of the Class 4 District 1 Tournament on Monday evening.

Both the Sikeston and Cape Girardeau Central volleyball teams know each others' strengths and weaknesses -- and entering the third meeting between the two schools this season -- there was more than just bragging rights on the table.

The Bulldogs fell in three sets to the Tigers. All gutsy, competitive matches, and by watching Sikeston (10-24), it was apparent that they left it all on the floor.

A season that hasn't necessarily gone in the right direction for the Bulldogs, the team showed heart, albeit in a loss, with all three sets decided by four points or less.

"We showed up tonight in full force," Sikeston head coach Emily Pullen said. "I could not be more proud of them. We came up short, but we gave everything we had on that court. A couple little things didn't go our way, of course, but you know, I feel like it was even on both sides. They had their mistakes; we had our mistakes. But, overall, we fought, we didn't give up. We didn't let anything hit the floor. We were covering like we've never covered before. Overall, they just played really well."

In the first, the Bulldogs got out to a 17-15 lead over the Tigers, forcing Central to call a timeout. However, the Tigers responded, scoring five-straight points and take a 20-17 lead.

Sophomore Ella Vogel is one that stands outs.

Vogel led the team with 15 kills, while also providing defense with a team-high five blocks -- having long arms and quickness help in both categories.

"She has a strong night every night when she gets the ball," Central head coach Sara Henry said of Vogel. "She's doing really well with working around her blockers and running different options. She ran a few slides tonight, and I'm really excited to see her running different things."

Having a pair of excellent setters isn't a problem either when you are trying to get in position to score.

Junior Emily Spinner and senior Olivia Hukel each did well in that regard. Hukel had 11 assists, while Spinner had 10.

In the second set, it was much of the same.

Sikeston got out to an 18-14 lead before Central called a timeout. Instead of falling, though, the Bulldogs worked around a late rally by the Tigers to escape with a 25-23 set win and force an all-decisive third.

Whatever exhaustion either team had was not visible in the third.

Despite getting out to another early lead, it turned out to not be sustainable, as the Bulldogs were down 19-16, before a timeout was called.

With the match firmly in the hands of the Tigers toward the end, the Bulldogs still managed to make things interesting. Sikeston managed three-straight aces, while the Tigers still had match point.

The magic wore off at the end, though, as the Tigers ended up winning the set 25-21.

"I've been using the word complacent a lot this season, but I feel like we get that way sometimes," Pullen said. "Even though they came back right to us, we started battling and battling back and forth. I think we just had a couple of errors there, but in the game of volleyball, you're not going to be perfect. If everything were perfect, we'd have a flawless season."

It was difficult for the Tigers to find creases against the Bulldogs.

Sikeston finished with 66 digs on the night, with three individuals reaching double-figures.

Alivia Cobb broke her record with 443 digs in a single-season this season and showed off her talent, once again, on Tuesday. The senior finished with 25 to lead the match.

Fellow senior Emily McHaffie had herself a big night as well. She finished with 14 digs, while junior Khrystionna Swann added 11.

The defense didn't stop there, though.

Sikeston totaled seven blocks for the match as well, led by freshman Shania Hodges' four. Her sister, Armani, had a pair of blocks herself, while McHaffie had the other.

The Bulldogs also had 24 kills and hit positively for the match. McHaffie led the team in attacking with eight kills.

Freshman Emma-Claire Self led the team in assists, with nine, while Barnett finished with six.

"Over the season, we've had a rough start but here in this last game, we showed how united we can be," said McHaffie on her team's hard-fought match. "We ended up not winning, which was disappointing and sad, but we showed how well we can play as a team. In that last game, I think every individual gave their all."

Central will look to keep its season alive on Wednesday when the Tigers go up against second-seeded Farmington at 6 p.m. in the semifinals.