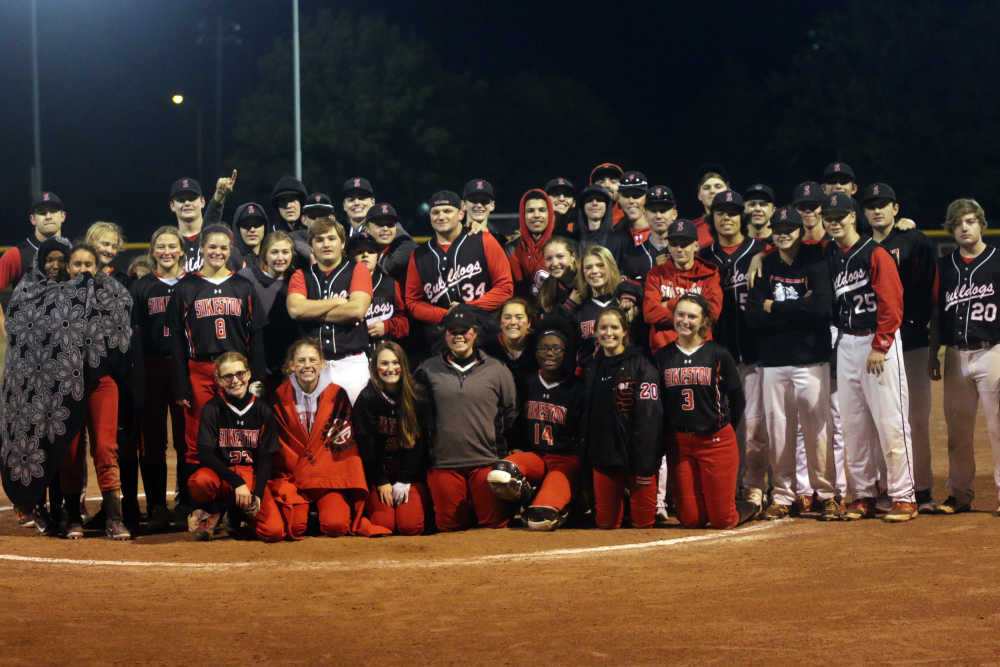 The Sikeston softball and baseball teams after the Battle for the Diamond fundraiser, at the Sikeston Recreation Complex, on Thursday, Oct. 24, 2019.
Alex Wallner/Standard Democrat

SIKESTON — Community support is one thing that every coach tends to instill within their respective programs.

On Thursday night, the Sikeston baseball and softball teams competed in the “Battle for the Diamond” at the Sikeston Recreation Complex. A seven-inning softball game where the baseball players took hacks in an unfamiliar sport.

Despite the result on-the-field, though, the bigger picture was giving back to those in need.

Two tables were set-up at both entrances of the Complex and filled with various items that will get donated to the Bulldog Pantry.

“It’s something that we’ve copied off some colleges that have gone through and done this,” Sikeston head baseball coach Brett Kolons said. “We checked in and made sure everything was good and legal and everything like that, and it’s another for us to give back to the community. So, at the end of the day, that’s the name of the game. We’re trying to build human beings out of our players, and one way we’d really like to do that is by giving back to the community.”

The result of the game wasn’t the prettiest for the baseball team, as they fell 14-6.

Seniors Clark Steward and Emma Drury were the managers of both teams. Both also participated in the game, as well.

“It was really fun,” Steward said. “I think that everybody came out here, yes we wanted to win, but it was more about fun for us. While we’re sad we couldn’t pull it out in the end, everybody had a great time, and everybody got an at-bat, so overall I think it was a very successful event.”

Drury added on and said that giving back was something that was needed.

“This event was important to us to give back to the community that has given back to us so many times and supported us throughout the season,” Drury said. “It was also pretty awesome to beat the boys.”

With a community so indebted with the high school and the athletics programs, it was almost a no-brainer to start this fundraiser.

Sikeston head softball coach Laura Brown had the same feeling after the game.

“The community does so much for us,” Brown said. “We have so many supporters that come from everywhere and help us out, so we feel like it’s something important to do.”