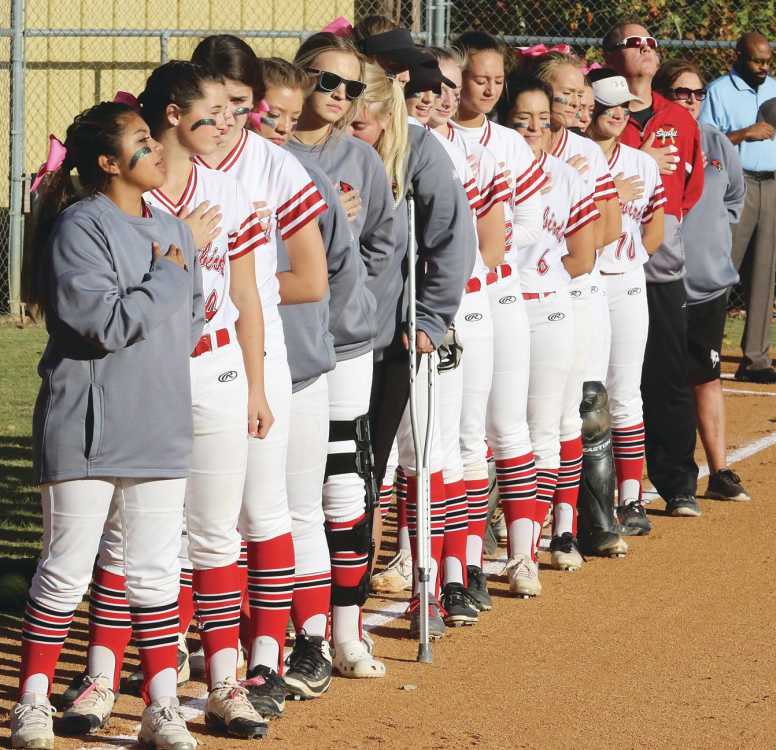 The East Carter softball teams waits for the start of the national anthem prior to the MSHSAA Class 2 sectional playoff on Wednesday, Oct. 23, 2019, at Rains Field at Three Rivers College in Poplar Bluff, Mo.
DAR/Brian Rosener
Order this photo

It will be a busy weekend for five East Carter softball players.

First, the Redbirds will play in the MSHSAA Class 2 quarterfinal in Elsberry at 3 p.m. Saturday.

The Redbirds finished fourth at state in softball last year and are the two-time defending 1A Small team state champions in cheerleading.

“One thing I’m worried about is rain,” East Carter softball coach Teresa Kearbey-LeGrand said of a 70% chance of rain in the forecast.

The logistics of getting everybody to Elsberry, located near the Mississippi River north of St. Louis on Highway 79, might be easier than scouting the Indians.

Most teams at this stage have good pitching and can hit, she said.

“I’m not real worried about us adjusting to the pitching but I’d like to be more prepared,” Kearbey-LeGrand added.

Elsberry (12-7) advanced to the quarterfinal with a 9-8 win in eight innings Wednesday at Bishop DuBourg. The Indians claimed their first district title since 2012 by earning the top seed in District 4 and knocking off second-seeded Valley Park 9-8 in the final.

The Indians were up 3-0 after three innings in Wednesday’s playoff before falling behind 4-3. Both teams scored twice in the fifth before Elsberry tied the game in the seventh and took the lead with a passed ball in the eighth.

Elsberry, which was 7-3 at home this fall, is appearing in the state quarterfinal for the second time in program history but has never reached a final four.

East Carter is looking to make its second straight trip to state and has yet to give up a run in 17 postseason innings. The Redbirds have outscored opponents 29-0 in the last three games while allowing just five hits and 10 total base runners. Moore has struck out 26 and given up two walks and hit two batters while extending a scoreless streak to 28 innings.

“Our defense has been spot on,” Kearbey-LeGrand said. “I think they have a lot of confidence going into this game and that’s going to be a huge asset.”