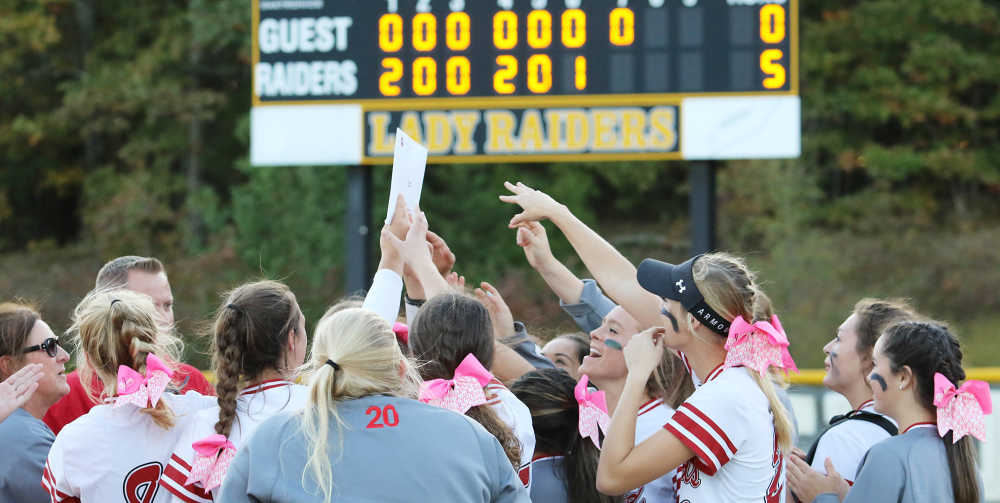 The East Carter softball team gave their large group of fans something to cheer about early in the MSHSAA Class 2 sectional playoff Wednesday.

Makenna Moore laced a two-run triple in the first inning then struck out 10 in tossing a two-hitter as the Redbirds beat St. Pius X of Festus 5-0 at a rowdy Rains Field.

“It means a lot, especially to have all of our fans in the crowd here from our own town,” said senior Kennedy Thies, who doubled and scored.

“We’re definitely excited to be moving on to the quarterfinals.”

The Redbirds (21-6) will face Elsberry (12-7), which beat Bishop DuBurg 7-6 in a sectional playoff. The Indians, who earned their first district title since 2012, will likely host the quarterfinal Saturday afternoon.

Wearing pink ribbons in their hair in honor of their coach’s battle with breast cancer since last fall when the team placed fourth in Class 2, the Redbirds posted their third shutout in as many postseason games.

“They just don’t stop. They keep fighting and I love them.”

Four of East Carter’s first six hitters reached in the bottom of the first.

“Swing until we find a good pitch,” Naomi Crowley said. “Just chop away until we can get it.”

With one out, Moore took an 0-1 pitch down the first-base line and beat the throw to third for a two-run triple.

“It was a big relief,” Thies said of the early lead. “I had all of the confidence in the world in my team.”

East Carter left a pair of runners stranded in scoring position when Anna Willis had a line drive snared by the second baseman reaching to her left.

A.J. Agers kept the Redbirds in check over the next two innings, but the Lancers didn’t have a hit until the fourth and didn’t get a runner into scoring position until the sixth.

Moore hit the first batter she faced in the second inning, clean-up hitter Victoria Arriaga, but struck out the side on 13 pitches. Arriage lined a single up the middle in her next at-bat with two outs in fourth but didn’t move.

Trailing 4-0 in the sixth, the Lancers had their best scoring chance with runners at the corners and one out, but Moore struck out Agers and got Arriage to pop up to the shortstop.

“We struggled against Moore today,” St. Pius X coach Kevin Halley said. “Didn’t do enough at-bat wise and when we had base runners on at times, just didn’t find a way to come up with a big hit.”

Moore has given up five hits in three postseason games and extended a 28-inning scoreless streak over East Carter’s last five wins. She faced a three-ball count just once Wednesday and the second hit she allowed opened the seventh.

“She has been spot-on,” Kearbey-LeGrand said of Moore.

“Depending on where the girls play her, if she swings away, bunts or slaps, she can do all three,” Kearbey-LeGrand said. “She’s an excellent hitter. That’s why she’s our leadoff.

“She hit it perfect.”

Crowley said scoring two runs on the infield hit was a nice surprise, adding, “That’s Audrey, she’s always looking to get an extra base.”

Thies led off the sixth with a double and got an extra base when the throw from right field got away. Willis hit a 3-1 pitch to the right side of the infield to score the run.

“We went into it knowing she was going to be a good pitcher,” Thies said. “We sped our pitching machine up to get us ready and did a lot of batting practice.”