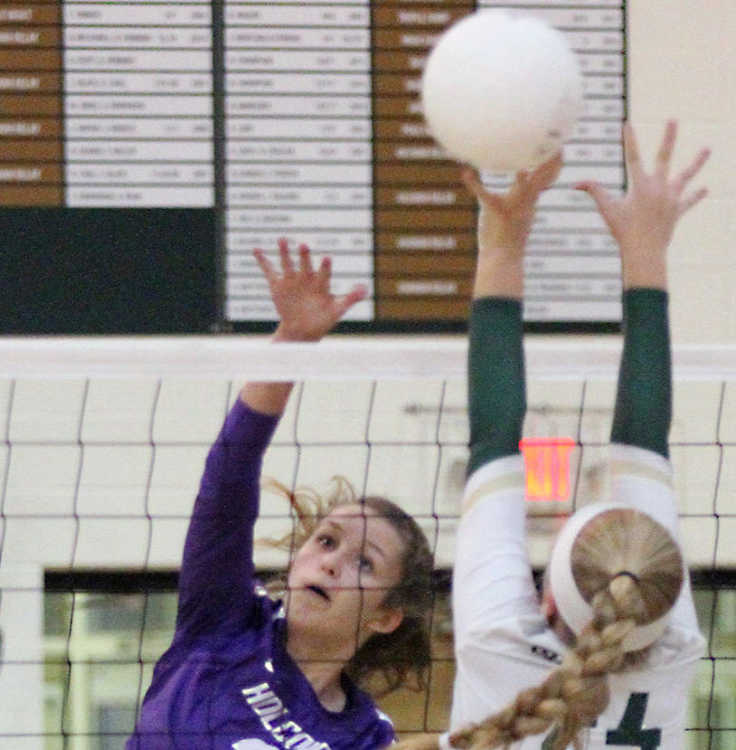 “We talked about how bad our blocking was after last night,” Casper said. “We put an emphasis on getting in a better position to block. Our girls made the adjustments and it paid dividends tonight.”

The defensive adjustment at the net helped Holcomb close out the regular season on a high note. Holcomb collected five blocks as it beat the Malden Green Wave 25-16, 25-20 Tuesday night.

“Very good road win for us tonight against a good program that is well-coached,” Casper said. “I don’t want to take anything away from Portageville but I felt like we played really bad Monday. We just didn’t bring our best effort last night. It looked like we had too many days off. Hopefully, this win will get us on the right track. We’ve got a few days to practice now to get ready for the district.”

Malden jumped out to a 5-1 lead in the first set when it scored four of its first five points on kills from four different players.

“We’ve been practicing hitting on serve receive,” Malden coach Brittany Crane said. “I feel like we started doing that tonight. But then we got into some funks where we couldn’t get the pass, set, or the hit.”

Holcomb followed with the next seven points to move ahead 8-5. Bailey Cupples recorded five ace serves during the run.

The Hornets later increased its lead as large as 19-10 after Abby Hellebusch collected consecutive ace serves and Cupples followed with a block. The Hornets led by at least six the rest of the first set on its way to a nine-point win.

“We served the ball well in the first set,” Casper said. “Moving forward we need all of our girls to give us strong, accurate serves.”

Holcomb led by single digits most of the second set. The Hornets built a lead as large as 17-13 before Malden cut the deficit to 20-19 and forced a Holcomb timeout.

After the timeout, Holcomb scored five of the next six points on four kills and an ace serve to secure a 25-20 victory.

“Holcomb’s middle hitters were ready tonight,” Crane said. “They hit the ball pretty deep on our defense. We cheat up a lot and they burned us a few times by hitting it past us. Once we moved back they started tipping on us and we didn’t move fast enough to get there.”

“Onerica Reed has been a great blocker that has delivered great attacks for us all season,” Crane said. “We just couldn’t get the ball to her enough tonight. Madison Mittag had a really good night tonight on the right side for us.

“Haven Wills and Shamya Dobbins also put their heart into the game tonight,” Crane added. “We just came up a little short.”

“I’m really looking forward to the Bloomfield game because it will allow us to see what we need to keep working on before the district starts next week,” Crane said.

Holcomb finishes the regular season with a record of 15-12.

Holcomb is the No. 1 seeded in Class 1, District 1 at Holcomb next week. Holcomb has received a first-round bye in its district. The Hornets play in a district semifinal Tuesday at 5 p.m. against the winner of a quarterfinal between No. 4 seeded South Pemiscot and No. 5 seeded Southland.

“We put ourselves in the right position getting the one seed,” Casper said. “We know on any given night if we don’t play our best we can get beat by anyone. We know we’ve got a great opportunity in front of us but we are not taking anything for granted. We are just hoping to make the most of our opportunity.” 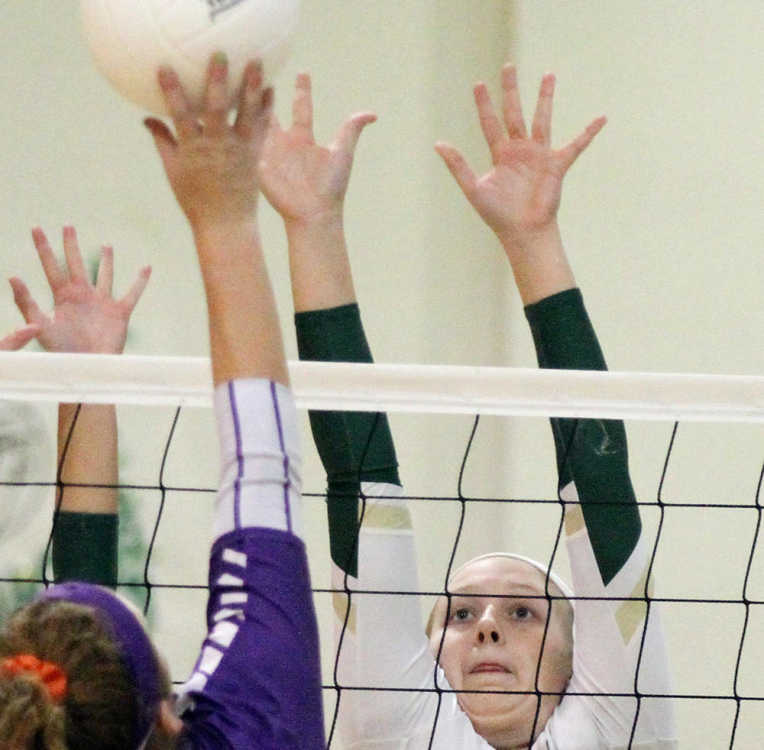 Photo by Dustin Ward, staff
Malden’s Madison Saulsbery blocks a hit by Holcomb’s Hannah Burk in a varsity volleyball game on Tuesday night at Malden.
Order this photo
Respond to this story