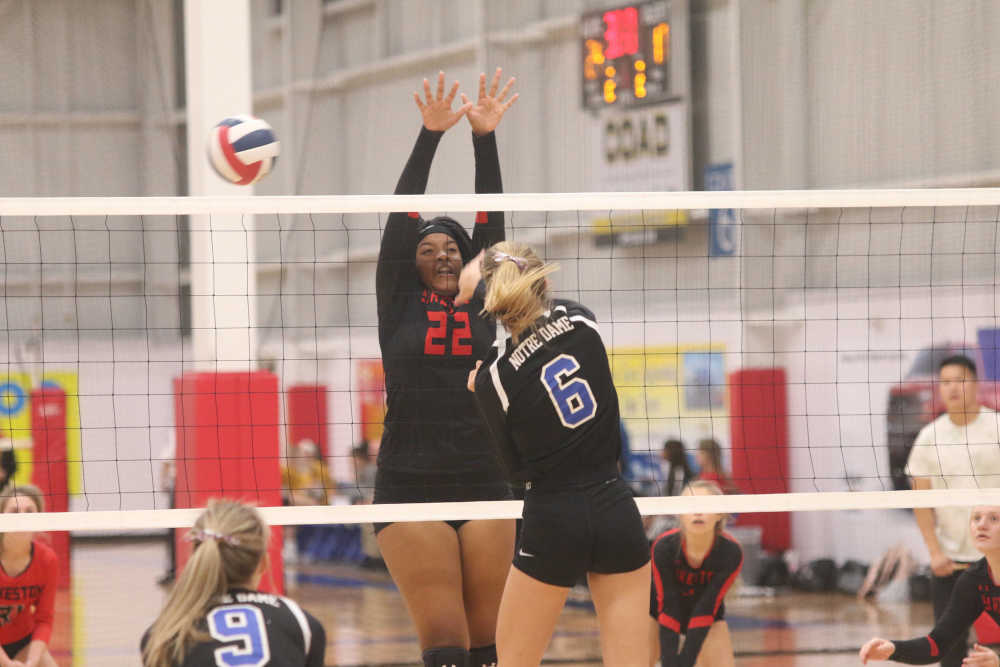 CAPE GIRARDEAU, Mo. — Pool play was not pleasant for the Sikeston volleyball team on Tuesday.

The first day of the SEMO Conference Volleyball Tournament kicked off at the Cape SportsPlex in Cape Girardeau.

10 teams, split into two divisions, made up the tournament. In the North Division was Jackson, Notre Dame, Cape Central, Poplar Bluff, and Sikeston, while the South Division comprised of Scott City, Oran, New Madrid County Central (NMCC), Kennett, and Charleston.

Sikeston finished fifth in its respective division, with zero wins and eight losses — wins and losses are determined by sets won.

The Bulldogs drew Jackson in their first match of the day. Sikeston lost in straight-sets 10-25 and 10-25.

Errors killed the Bulldogs in the match, with 13 hitting errors. Sikeston finished with five kills — Emily McHaffie and Shania Hodges each had two to lead the team.

Alivia Cobb was the only Sikeston player to reach double-figures in a category, with 10 digs.

After a break between matches, Sikeston head coach Emily Pullen made some changes to the lineup.

“Sometimes we deal a lot with complacency,” Pullen said. “I think we needed a little change, and it worked out for us. We had a freshman, who’s normally back row, playing front row, and she did a great job. All of them stepped up, and I think we needed that moment to regroup.”

The result was better for the Bulldogs, with most of the bench getting more time on-the-court, but the match still ended in defeat.

For the second-straight match, Cobb finished with 10 digs, making her the only Bulldog to finish in double-figures.

Once again, Cobb finished with 10 more digs against Notre Dame in Sikeston’s third match, but in a losing effort. Sikeston fell 9-25 and 9-25.

Notre Dame hammered 16 kills against Sikeston in the third match of the day. Mollie Jennings and Grace Landewee each had four, while Rylee McClintock and Natalie Timpe had three. Mary Catherine Young also got in the scorebook, finishing with a pair.

Defensively, Delaney Dohogne had four digs, while Jennings and Maggie Eby had three. Mary Dirnberger and Brugger each finished with two as well.

Taydrianna Barnett finished with six kills, while Cobb, McHaffie, and Khrystionna Swann all had eight digs. Both were team-highs.

Cape Central finished second in the pool, with five wins and three losses.

Poplar Bluff ranked fourth in the pool, with three wins and five losses.

In the South Division, Oran finished third with four wins and four losses.

Kaylee Payne led the charge for the Eagles against the Bluejays. She had a team-high eight kills while adding seven service aces.

Against Kennett, Payne and Traci Hency tied for the team-high in offense, with three kills each. Savannah Below had two kills, and Haley Webb finished with one.

Laney Shy had 15 assists against NMCC. She also added one ace and one kill.

Payne led the team in kills, with five, while Hency had three, and Kennedi McVay finished with two.

Hency led the team with four service aces, while McVay and Webb had three as well.

In their final match of the night, against Scott City, Payne had eight kills.

NMCC finished fourth with four wins and five losses, and Charleston finished in fifth with zero wins and losses.

Kennett finished with the No. 1 ranking, with seven wins and one loss. Scott City was second with six wins and two losses.