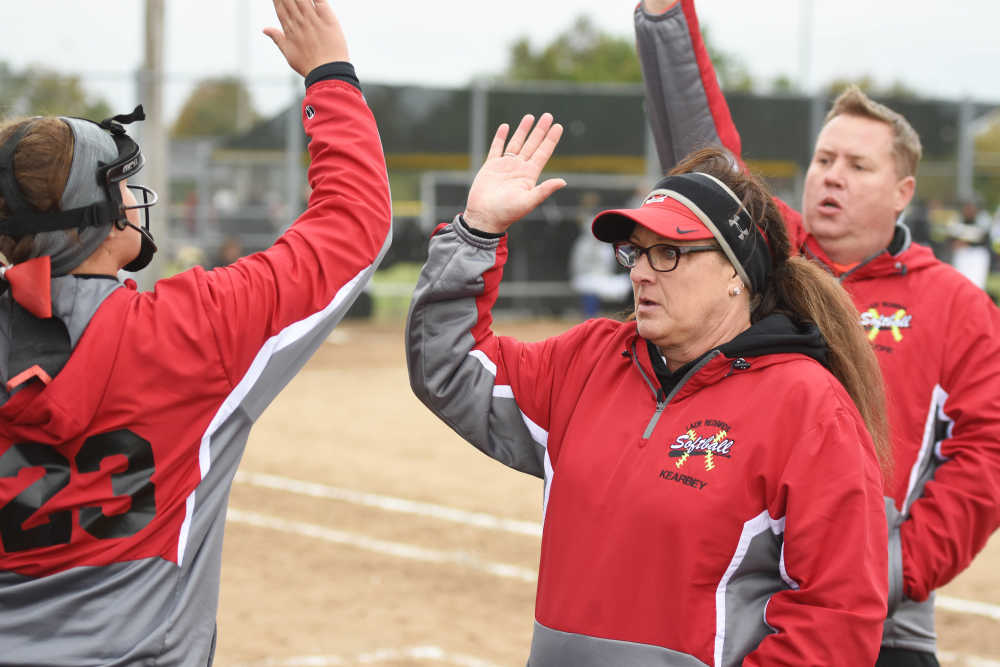 East Carter coach Teresa Kearbey-LeGrand, seen in this Oct. 26, 2018 photo in Springfield, Mo. during the MSHSAA Class 2 state semifinal, was diagnosed with breast cancer last fall before the Redbirds made their postseason run.
DAR FILE
Order this photo

As the East Carter softball team prepared for its upcoming MSHSAA Class 2 playoff matchup with St. Pius X of Festus on Monday, their coach was in St. Louis seeing her doctor.

At this time last year, as the Redbirds were making a run to place fourth in the state tournament, Teresa Kearbey-LeGrand was diagnosed with breast cancer.

Following surgeries last winter and this summer, Kearbey-LeGrand said she is on the road to recovery. Having previously been diagnosed with breast cancer in 2002, she knows the road too well.

“This year and last year, it was a good distraction,” said Kearbey-LeGrand of the softball season.

Not wanting to be a distraction to the team, she chose not to tell anyone at first, other than her parents and husband. She told the team during the spring season.

“It was a huge shock,” said senior Naomi Crowley. “We didn’t know at all until the spring season. We didn’t know she was battling that the whole entire fall season through state at all.”

Senior Makenna Moore said she was “taken aback” when told.

“She’s an amazing coach, I love her,” Moore said. “She loves each and every one of us girls like we’re her own daughters. I think we look at her as a mother as well.

Players have worn pink ribbons for their coach, and the fact that October is breast cancer awareness month is when the team made its playoff run last year and earn the program’s 10th district championship last week, is not lost on them.

“She’s been through such a hard time this past year,” Crowley said. “It does make it so much sweeter to know that we have won this for her, especially in this month.

“And we didn’t even know it (last year), so that’s pretty cool.”

The Redbirds had never beaten Kelly in six previous postseason meetings before a 5-4 win in nine innings last fall. They earned a 3-2 win in eight innings over Montgomery County in the quarterfinal, their third straight one-run win, to earn the program’s second trip to state before losing 2-0 to Trenton and 8-0 to Blair Oaks, finishing fourth.

This season, the Redbirds enter the playoffs 20-6 with losses to bigger schools Festus, Jefferson City, Helias Catholic and Notre Dame.

Their opponent Wednesday, St. Pius X-Festus, is 15-6 having also lost to Festus as the only common opponent. The Lancers beat Kelly 2-1 in the District 2 championship.

The last meeting between the two programs was in the 2011 state playoffs, a 2-1 East Carter win in route to a fourth-place finish at state.

The teams will meet at 4:30 p.m. Wednesday at Rains Field at Three Rivers College. Admission to the playoff game is $7. The winner advances to the quarterfinal Saturday.

“Playing a team we haven’t played makes us not underestimate anybody,” Moore said. “I think it helps us understand that we’re going to have to play (our game).”

A.J. Agers allowed just three hits and one unearned run against Kelly. The hard-throwing junior is 11-3 with a 1.78 ERA in 16 games. She has 131 strikeouts and averages a walk per game.

“We’re just going to practice like we normally do, turn up the pitching machine,” Kearbey-LeGrand said of preparing for the Lancers.

While East Carter’s infield was a muddy mess Monday, the team took to the outfield for hitting practice with assistant coach Jason Moore.

“We’re used to it, I think we’ll be OK,” Crowley said of not being able to practice on the infield. “Our defense is pretty strong and we just hit when we don’t get on the field.”

Agers tops the Lancers order and leads the team with a .537 average, 29 hits and 28 runs scored. Tori Arriaga, who hit second, leads with 33 RBIs and four home runs with a .412 average. Kacey Flanagan (.368 average) and Molly Flanagan (.421) make up the heart of the order while three more players have double-digit RBI totals for the season.

East Carter features eight players with 10 or more RBIs on the season and is hitting .315 as a team.

“We’ll just try to put the ball in play and run because we’re fairly athletic, so if we can do that, I think we’ll be OK,” Crowley said.

Kearbey-LeGrand said the offense has picked up this season to compliment the pitching and defense.

The Redbirds outscored opponents 24-0 in two district games and have shut out opponents 10 times. Moore has struck out 180 batters and has a 2.15 ERA in 26 starts.

“You always want for your team to be successful,” she said. “They have nothing to hang their heads about because they’ve been outstanding this whole year.”