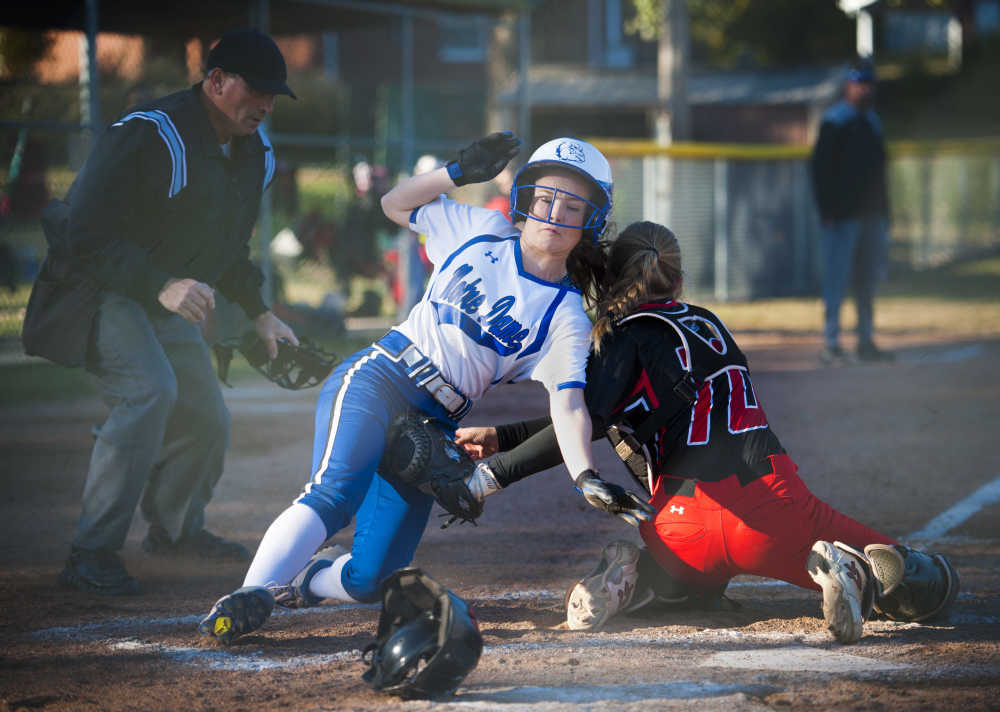 PERRYVILLE, Mo. – History shows that Notre Dame softball wasn’t going to have much difficulty with Sikeston.

The blue and white Bulldogs had won the last 19 meetings between the two programs and they had beaten the red and black Bulldogs 15-2 earlier this season. However, that didn’t appear to be the case early in Thursday’s Class 3 District 1 semifinal at Perryville City Park.

Sikeston got its initial five hitters on base, four with singles, and took a quick 1-0 lead. But the euphoria was short-lived.

“Five miscues in one inning,” Sikeston coach Laura Brown said afterward, “and bam, 10 runs. You just can’t commit five errors against a team like that.”

Sikeston opened the game with junior catcher Jordi James getting hit by a pitch. She ended up getting hit twice by Notre Dame pitcher Hailey Kutz, while also drawing a walk.

“She’s got to be better (in the championship game today),” Notre Dame coach Jeff Graviett said of his pitcher.

Kutz threw 22 pitches in the opening inning and ultimately allowed eight hits and two walks while striking out two.

“I thought Hailey had her change-up going and we kind of rode that,” Graviett said. “That was her best pitch today. She had a little cut on her cutter, but we were definitely having trouble in changing speeds, so we kind of rode (the change-up) to the end.”

After James reached base, she eventually came home, as Naudia Lazcano (two singles for the game), Nayla Josae Bonner (two singles), Emma Drury (one single), and Megan Witt (one single) all had connections to reach base.

“We hit the ball,” Brown said of her team’s success in the opening inning. “That’s all we had to do was hit the ball. We had put so much emphasis on ‘She is hittable. Get that out of your heads. She is just a pitcher.’

“I just hammered that for over a week.”

Notre Dame fought back immediately against Bonner, as it scored three runs in the bottom of the first and never trailed again.

Kutz settled down in the second inning. She allowed a walk to James and a single by Lazcano, but no runs.

Notre Dame then stretched its margin to 5-1 entering the third.

At that point, the game got out of hand.

Notre Dame catcher Kristen Barwick led-off that inning by reaching on a Sikeston error and it never got any better for Brown’s team.

“Top to bottom,” Graviett said, “this is one of the best lineups I’ve had in my close to 20 years of coaching softball here. We’ve got a lot of speed and some pop in the middle.”

“We’ve got some hot hitters out there,” Graviett said. “That is the key for us. We score about 10 runs a game and we have to continue to do that if we are going to make a run.”

The Bulldogs will face Perryville (19-8), which beat North County 11-0 in five innings Thursday.

The Pirates are the last team to knock off Notre Dame after beating the Bulldogs 9-6 last week.

A year ago, the Pirates beat Notre Dame 6-5 in the District semifinals, which snapped a four-year streak for Graviett’s program in winning the District.