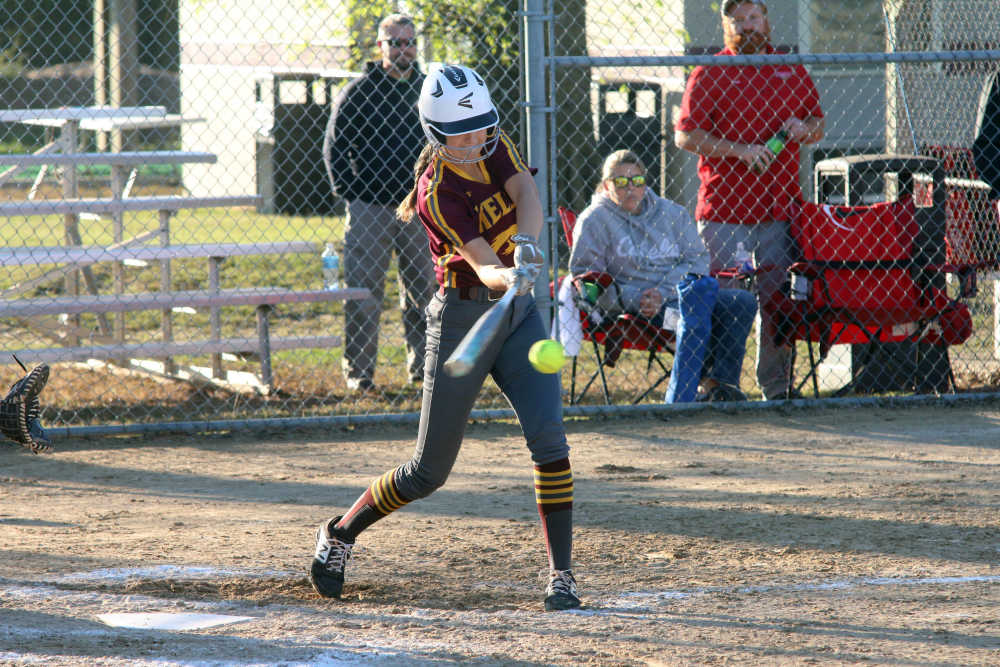 BENTON, Mo. — The Kelly softball team started its quest for a 32nd district title Thursday against Chaffee in the semifinals of the Class 2 District 2 Tournament.

It was a tough start for the Hawks in their 7-1 win over the Red Devils as the bats went cold at the beginning.

Chaffee got out to a quick 1-0 lead in the second inning after Kaya Carroll singled with one out in the frame. Then, after Ashtyn Rains struck out looking, Baylee Elfrink followed with a single to put runners on first and second with two outs.

Abby Cowell then produced the first run of the game for the Red Devils with hit a single up the middle to score Carroll from second.

That would be the only offense Chaffee mustered, however, as Hawks hurler Kelly Ivy allowed only two hits over the five innings.

The question was going to be the offense, and if and when it would show up.

After the Hawks loaded the bases in the bottom half of the second, Kimberly Seabaugh grounded out to third to end the threat.

With two outs in the inning, Kate Hughes and Paiten Groves hit back-to-back singles before Seabaugh redeemed herself, as she laced a pitch that one-hopped to the Chaffee center fielder. The ball went through the outfielder’s legs, though, allowing the go-ahead run to score and Seabaugh to advance to second.

“The whole season I’ve been on my front foot, just popping everything up,” Seabaugh said. “So, I’ve started to slap, and it makes me focus more on the ball, and I just made solid contact with it, and I felt she was going to catch it, but I guess she just stopped and hesitated.”

From that point, the offense didn’t stop.

In the fourth inning, Kelly erupted for five runs.

Ivy retired 16 of the next 18 Chaffee batters after the Red Devils took the lead. Pitching to contact, all of her outs were turned in by her defense.

“She was hitting her spots,” Kelly coach Melanie Heuring said. “We had to keep it on the outside corner, and her curveball was working well. With a hitting team like this, who’s come on in the last month as a good-hitting team, we had to do something to not just pitch it inside to them.”

Alaney Moore started the rally with a single, while Kendyl Stuckey reached base on an error by the third baseman.

Leah Lambert hit the ball right to the Chaffee first baseman, who threw home in vain in an attempt to get Hughes.

That then brought the top-of-the-order back up, starting with Madison Yount.

Yount notched a base hit to score Groves with the game’s final run.

“I kept telling them that they had to make adjustments,” Heuring said. “You got to get up in the box. If you need to slap bunt, to focus on that ball and see it a little bit better, keep that weight back and drive it.”