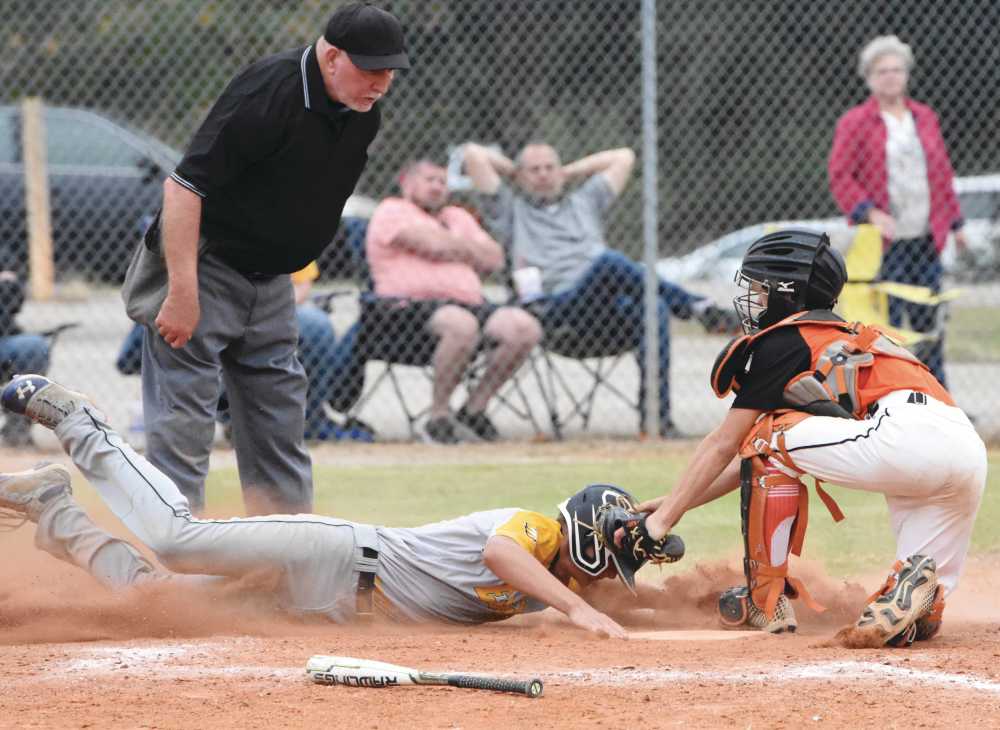 POPLAR BLUFF — In the first inning, Naylor scored a run off a walk and stranded the bases loaded while Clearwater had one runner reach on an error.

It was a harbinger of things to come as third-seeded Naylor beat second-seeded Clearwater 11-1 in five innings in the semifinals of the Ozark Foothills Conference Tournament on Tuesday at Three Rivers College.

“That’s the best game we’ve played. That’s the way we should play. This school has waited a long time to get to this,” Naylor coach James Bond said. “We were fired up. We’ve wanted this for a long time and this is a team that can do something right. We’re young with some veterans and we’re fired up.”

Naylor (9-5) had at least five batters step up to the plate in every inning while the Tigers (10-3) accomplished that only in the fourth inning, which is also when Clearwater broke up Seth Jones’ no-hitter.

Jones’ only blemishes were back-to-back singles in the fourth inning to Gage Keller and Trey Rivas, Clearwater’s Nos. 3-4 batters.

Keller stole second and third after his single and Rivas drove him in for the Tigers’ only run.

Jones struck out the side in the third inning for his three total strikeouts and didn’t give up a walk.

“It probably wasn’t the best game on paper, but he got the job done as good as anybody,” Bond said.

Add in three errors and a pair of fielder’s choices, and seven Tigers reached base in the game.

The Eagles got eight of their 11 runs from the top four spots in the lineup — Jones, Wyatt Yarbrough, Cody Jones and Chase Sarabia.

In one instance, Sarabia laid down a squeeze bunt with runners on second and third. The throw to first was high for an error and two runs scored as Sarabia reached third, putting Naylor ahead 7-0 in the fourth inning.

Then Nick Garrett legged out an infield single, stole second and third, and scored on another squeeze bunt by Damian Thilman.

With runners on second and third in the fifth, Brock Woolard beat out a chopper to second.

One of Naylor’s four runs in the second inning was on a double steal.

The Eagles will face fourth-seeded Neelyville, which beat top-seeded East Carter 6-0, in the championship at 3 p.m. Thursday at Three Rivers in a matchup between two schools that are six miles apart.

“Coach (Scott) Henflind and coach (Tyler) Thompson are all class,” Bond said of the Neelyville coaches. “It’d be good for ‘Mosquito County’ down there for somebody. I think we’ve got a really good shot. We played them twice this year and came away with victories. I think we can do it again tomorrow.”

Heading into the OFC championship, Naylor has scored 27 runs in two days and has scored double-digit runs in four of their past five games.

Naylor beat Neelyville in both of their games this season, winning 8-3 at Naylor and 12-2 at Neelyville.

Clearwater, which had not allowed more than five runs in any game this fall, will face top-seeded East Carter in the third-place game at 1 p.m. Thursday. East Carter won their only matchup this season 3-2 on a walk-off single.