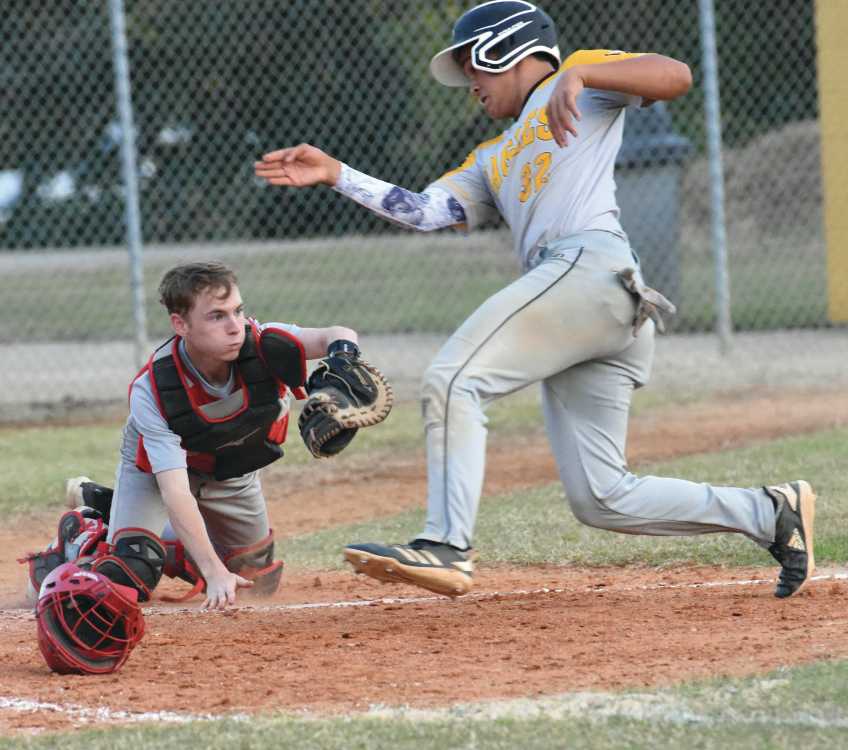 POPLAR BLUFF — Naylor scored in every inning as it overcame being outhit and kept its fall season alive.

Tied at 8-all after 4 1/2 innings, the Eagles closed by outscoring Greenville 8-1 late to win 16-9 in the Ozark Foothills Conference Tournament quarterfinals on Monday at Roger Pattillo Field.

“The only positives I really have out of this game is that our No. 1 and 2 pitchers are both available,” Naylor coach James Bond said, adding that senior Chase King did well in a rare pitching appearance late in the game.

Naylor (8-5) drew 11 walks, including four during a four-run fourth inning. Cody Jones and Seth Jones also singled in the fourth.

The Eagles added three runs in the fifth to take a 14-8 lead. With two outs, Nick Garrett singled, stole second, took third on a walk and scored on a wild pitch.

Chase Sarabia added one more run in the sixth.

Seth Jones scored four times and went 3 for 3 with a hit-by-pitch.

The Bears (0-14) fell behind 5-0 after the first inning and rallied with four runs in the third and three in the fourth to tie the game at 8-all.

Hayden McDaniel and Kevin Brown both had singles in the third as Naylor also committed two errors in the inning.

Greenville leadoff hitter Miles Melvin singled to start the fourth, and after a fielder’s choice by Warren Willard, Garrett connected for this 2-run double.

Naylor later made another error that allowed Garrett to score and tie the game.

The Eagles later scored two runs seventh inning after Naylor made two errors and Willard, who was 1 for 3 and reached base twice on fielder’s choices, doubled.

Nine runs are the most the winless Bears scored in a game this fall.

“We’re young, we’re building,” Greenville assistant coach Tony Ketchem said. “We learned a lot but we have a long way to go.”

Greenville had 13 hits, but the Eagles still saved their top two pitchers for a semifinal matchup against No. 2 Clearwater at 3 p.m. Tuesday.

Top-seed East Carter will play No. 4 Neelyville in the other semifinal at 1 p.m. Tuesday. The third-place game is 1 p.m. Thursday and the championship will follow.