A love of kids, a love of Perryville, and a love of the game 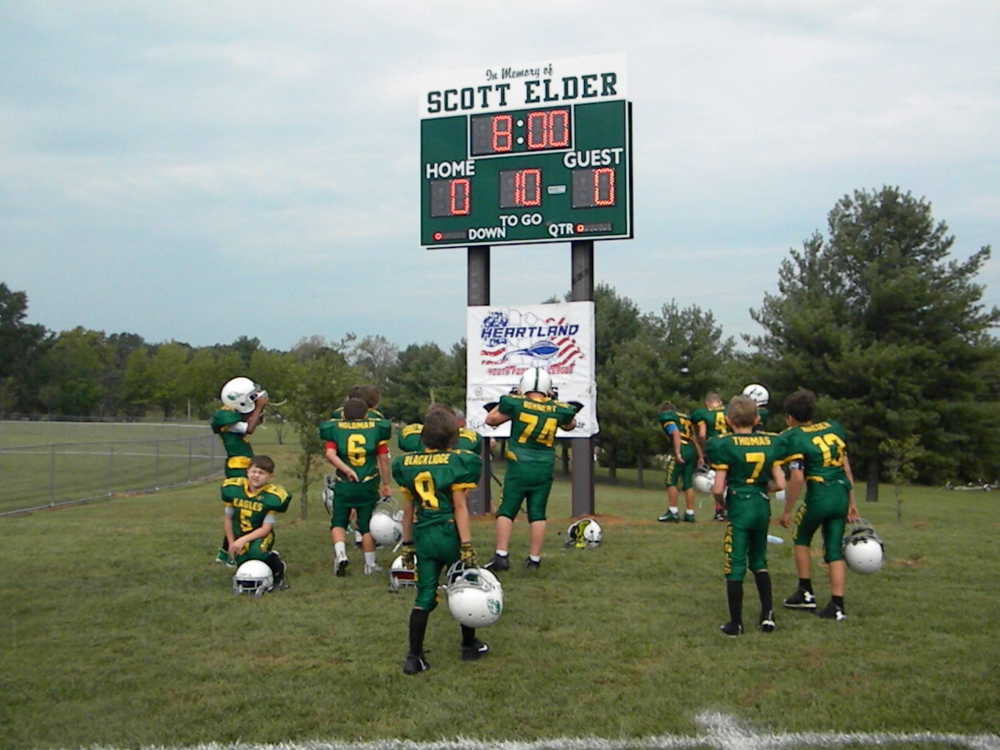 Members of the Perryville Eagles' football squad gather under a new scoreboard at Perryville Youth Football Field in Perryville, Mo. Saturday. The scoreboard was dedicated in honor of former league coach Scott Elder, who tragically passed away from cancer in December of 2011.
Tom Davis ~ Tdavis@semoball.com

PERRYVILLE, Mo. ľ It was an overcast Saturday morning in Perryville. The temperature was cooler than it has been of late and there was intermittent spitting rain. However, the less than ideal weather wasnĺt enough to dissuade many members of the community who had a vested interest in the Heartland Youth Football League from coming out to watch the elementary-aged kids begin the first chapters of their football careers.

The young athletes learned a message of citizenry Saturday, as they always do, but also of caring.

The league conducted a special ceremony attended by a throng of family and friends, as a scoreboard was erected to honor the memory of former league coach Scott Elder, who tragically passed away on Dec. 22, 2011, from cancer at the way-too-young age of 40.

Kramer wasnĺt involved when the Perryville Youth Football League began in 2003, but the following year Scott began working with the kids of his hometown when his son, Zach Elder, got involved in the league as a player. And he never wanted to stop.

If there was anything that Scott loved more than being a positive mentor for the kids of Perryville, it was the town itself.

He and his four siblings (Mark is the oldest, followed by Scott, Danny, Kim (Richardet), and Jennifer (Wilson)) are the children of Tom and Juanita Elder, and they have each spent their entire lives in the community after graduating from Perryville High School.

That devotion to the community was the impetus for Kim to spearhead an effort to honor her older brother.

ôWe had several ideas to try and throw together to do something in his name,ö Kim said. ôBut nothing really worked out until the scoreboard idea came up.ö

Kramer said there was a desperate need for one, as the league has had to communicate the time of games verbally with officials during play for years.

ôShe asked what was the most crucial need to help the program grow,ö Kramer said of Kimĺs request to help. ôIĺd love a flag pole, donĺt get me wrong, but out of everything that we truly needed, we needed a scoreboard.ö

The league, the Elder family, and the City of Perryville Parks and Recreation Department got to fundraising and raised the $5,000-plus to erect the scoreboard at the corner of the PYF Field.

Kramer said it wouldnĺt just be the football families that see the sign acknowledging Scottĺs contribution.

Each Fourth of July, the field is the gathering place for a fireworks show and thousands of Perryville residents will see Scottĺs scoreboard for decades to come.

ôEveryone will be able to see this,ö Kramer said. ôIt will always be here and people will always know that he was part of our program.ö

Scott was diagnosed with cancer in 2009 but that never stopped him from working with the kids. He coached until 2011 just months before his passing and according to his nephew, Trent Richardet, he coached ALL of his players the same.

ôHe never played any favorites, thatĺs for sure,ö Trent said. ôNo one would have ever known I was his nephew. But he cared about the game a lot.ö

Scott didnĺt care anymore ôabout the gameö than he did so the kids. Mark laughed as he remembered the ways his younger brother would motivate and reach his players.

ôHe was as into it, as the kids were,ö Mark said. ôWhenever they would practice, if (the players) did something right, then he would run the sprints, and if they did something wrong, then they ran the sprints.

ôHe was that into it. The kids loved him for that.ö

With the new scoreboard, that love will never be forgotten.