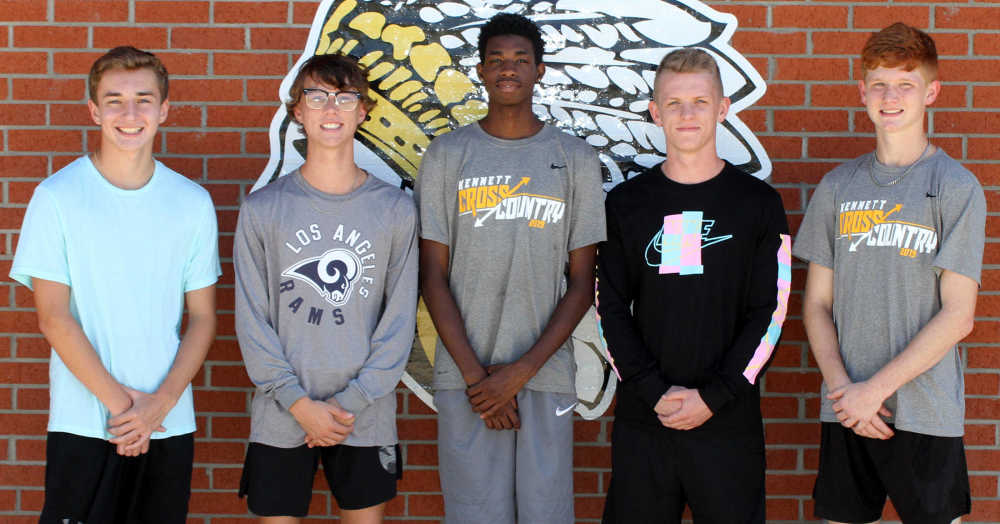 The Kennett Indians boys cross country team is blessed with experience entering the fourth year of its program.

All five runners out for cross country at Kennett are returning upperclassmen.

“We have pretty high expectations,” Kennett senior Kobe Patterson said. “We have a group of five experienced runners. We are ready to run and make some noise.”

Returning seniors on the squad are Patterson and Carson Blansett. Joining them are juniors Larry Payne, Brett Bradley, and Alex Yates.

“It’s great having all these guys back,” Kennett coach Fred Garmon said. “I hope guys push even harder this season. I have truly enjoyed being a part of these guys’ lives the last four years. It’s great to be involved in this school district and community and work with the cross country program. I hope to keep doing this here for 40 years.”

Patterson, who is a fourth-year varsity runner, qualified for state last season after placing eleventh in Class 3, District 1.

“We are expecting big things from him this season,” Garmon said. “He is a three-time all-conference runner. He is posting our top times right now.”

“Alex competes hard every day,” Garmon said. “Alex and Kobe are pretty good friends so they are always out running with each other and trying to get better. One thing I will say about Alex Yates is he’s a winner. I don’t care what he does he wants to win at it even if it’s the first one who can write their name on a piece of paper. Any type of competition he wants to win all-out.”

Payne, who qualified for state in the 400-meter dash and 4 x 200-meter relay in track last season, is entering his second season of cross country after starting the sport as a sophomore.

“Larry is a late bloomer,” Garmon said. “I came and watched him run track his freshman year and wondered why he didn’t run cross country. Eventually, we talked a little bit and I got him to run his sophomore year. He’s a natural athlete who has great mechanics when he runs. He’s a high-character kid that keeps trying to go, go, go. I expect big things from him this season and think he has the potential to be a No. 2 runner.”

Blansett, like Patterson, is a fourth-year runner that has participated in cross county since the program was relaunched at Kennett in 2016.

“He’s been with us since the program restarted,” Garmon said. “He suffered a few injuries last season. But this year he’s healthy and feeling good. He’s a great kid that embodies a student-athlete.”

Bradley also brings a couple of years of experience and strong work ethic to the table as a third-year runner.

“Brett is a very hard worker,’” Garmon said. “Whether it’s sports, academics, or working on the job he does what he is asked to do to his best ability. I love his work ethic.”

Patterson said the team has its sights set on bringing home conference and postseason medals.

“At the end of the summer we came together and started to train pretty hard,” Patterson said. “We want to all earn all-conference honors and send as many guys to state as possible.”

“Our conference is really good but we expect to contend, especially since we are returning two all-conference runners,” Garmon said. “One of our goals is to have all five of our runners make all-conference.”

Kennett gets its first taste of competitive racing when it opens its season Sept. 7 at the Arcadia Valley Invitational.

“Arcadia Valley is really flat so there should be some fast times posted,” Patterson said. “The competition will be pretty good so we will be pushed early.”

Editor’s Note: District assignments had yet to be released for cross country at print deadline.