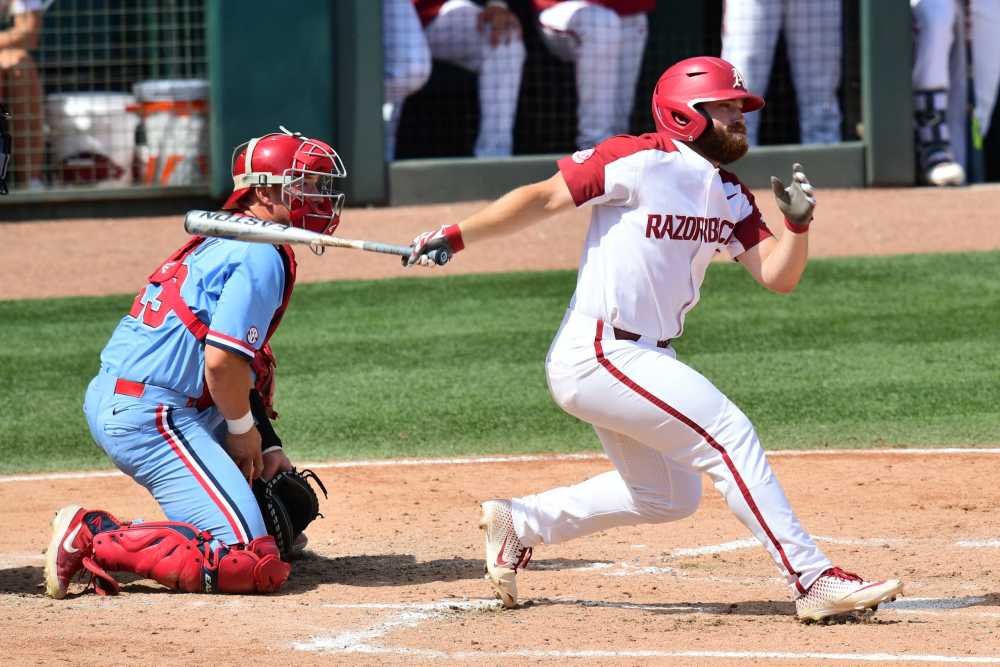 Following his redshirt junior season last spring, Trevor Ezell knew he wanted to play in the Southeastern Conference. Having already graduated, the then-Southeast Missouri State infielder could go to any college in the nation and play immediately as a grad transfer.

There was plenty of interest from programs, and in the end it was an easy decision for the Alexander, Arkansas, native. Ezell transferred to his home state's flagship university, Arkansas, a couple hundred miles from where he grew up. 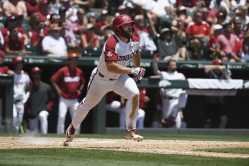 Nearly a year later, the move has paid off for the fifth-year senior. Ezell is the Razorbacks' starting first baseman after learning the position on the fly and boasts the second-highest batting average heading into the team's opening College World Series game against Florida State at 6 p.m. Saturday in Omaha, Nebraska.

In an odd twist of fate, Ezell wouldn't be in this position if not for one of his lowest points at Southeast, a season-ending back injury he suffered seven games into the 2017 season. The injury eventually required surgery, and he was granted a medical redshirt.

Ezell returned in 2018 and put together a season that garnered All-Ohio Valley Conference first-team honors and was good enough to get the Razorbacks' attention.

"It's worked out really well for me, I think," Ezell said. "At that time, it was really disappointing just because I really wanted to play with that group of guys. I thought we had a really good team. I thought I was a big part of it and kind of letting the group down by not being able to play. Some guys had to move around and play some positions they're not used to. I think it kind of hurt the team in a way.

"To able to look back on that now, it's kind of a blessing in disguise and thankful for the opportunity it gave me." 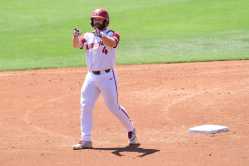 The Razorbacks are looking for the program's first national title after coming within one out of winning the championship last year. First, Ezell and his teammates have to survive the double-elimination format and get into the College World Series Finals, a best-of-three series that begins June 24.

Arkansas brings a 46-18 record into the World Series after beating Mississippi in the Super Regionals last weekend, a series in which Ezell went 7-for-14 with four RBIs and five runs.

He was able to experience that success in front of friends and family, a constant at Razorback home games this season. That wasn't always the case at Cape Girardeau, and the proximity to home played a factor in Ezell's transfer decision.

Ezell loved his four years with the Redhawks, though. He's kept up with everyone on the team, especially Danny Wright, Connor Basler and Alex Canty, three players Ezell said he took under his wing.

"It was a really tough decision, but I think it paid off for me personally," Ezell said. "It was tough, really, just because of the people there. There's so many great people in Cape Girardeau and great teammates. The coaching staff there I was really close to." 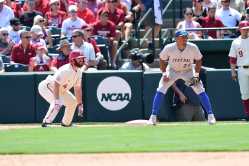 Trevor Ezell leads off from first base during a NCAA Regional game against Central Connecticut State on May 31 in Fayetteville, Arkansas. Former Southeast Missouri State standout Ezell and the Razorbacks are playing in the eight-team College World Series, which begins Saturday.
Courtesy of Arkansas athletics

In fact, both head coach Andy Sawyers and hitting coach Craig Ringe helped Ezell after he informed them he was looking to play somewhere in the Southeastern Conference.

"Once I told them that they were really good to me," Ezell said. "They know a lot of coaches in the SEC. Coach Ringe and Coach Sawyers both know people and coached with a lot of those people as well. They made calls for me. I had plenty of options to play somewhere, so they helped me out a lot."

It came down to Texas A&M and Arkansas, and once Ezell made the trip down to the Razorbacks' campus, he knew that's where he wanted to go. Now, he's playing the World Series for the first time. As a sophomore at Southeast in 2016, he did play in an NCAA Regional.

Despite the step up in competition -- Ezell said the depth of talent in the SEC is the biggest adjustment with there being "no easy at-bats" -- Ezell has thrived with a .328 batting average, is second with a .442 on-base and .573 slugging percentage and has scored a team-high 72 times. 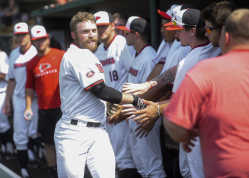 Southeast Missouri State's Trevor Ezell high fives members of the dugout after hitting a solo home run during a game against Belmont on Sunday, May 13, 2018 at Capaha Field in Cape Girardeau.
Ben Matthews ~ Southeast Missourian
Order this photo

Ezell has also done all that while adjusting to a new position. Ezell was a regular at second base throughout his time at Southeast but struggled with shoulder issues in 2018 and was a designated hitter for several games.

Those shoulder problems bled into this season. By Christmas break, Ezell hadn't been cleared for live practice and in an exit meeting coach Dave Van Horn floated the idea of Ezell playing first base.

It remained a vague idea until a week before the season when the coaching staff tossed Ezell a first baseman's mitt and told him to go practice there. With help from graduate assistant Jared Gates, who was Arkansas' first baseman last year despite a lack of experience, Ezell has adapted to a position he hadn't played since he was 8 years old. He's committed three errors in 507 chances.

"I certainly don't fit the profile you normally see, especially in the SEC," Ezell said. "I think a lot of it is just being experienced on the dirt already really helped, and having good footwork and being athletic. That's one thing I've got going for me. ... The biggest part was getting used to moving around, the position. When a ground ball's hit to someone, just getting set up as you're running over there, getting your eyes adjusted so you can see where the ball is coming from so you can stay focused on that."

Right now, the Razorbacks' focus is making history by winning a national championship.

When Ezell was in high school, his school team or summer ball squad played some games on Arkansas' campus and even in Omaha, Nebraska, the site of the College World Series since 1950.

It was then he began dreaming of playing there one day. It was a circuitous route with a solid four-year stop at Southeast, and he's now living out that dream.

"That's probably when I started (thinking) 'Man, it would be real cool to come here one day,'" Ezell said. "Six or seven years later from that, now here I am."